In 2015, my Barred Rock hen, Ella, had bumblefoot. I googled it and watched the videos on how to do the at-home surgery. I was a bit squeamish and felt I needed some support so I posted on our FB community bulletin board asking for a assistant. I said: “If after you’ve watched the video and still feel up to it, I’d appreciate your help”. Laurie responded and we worked on Ella together.

Since then we have swapped hatching eggs and birds. I contacted her recently to see about dropping by to do a piece for my blog. She suggested the following weekend. The next day she emailed to say I should have come the day before as they had a mink in their coop. It managed to kill four hens (two senior girls and two hens from last year’s hatch) and injure two pullets. The mink returned the following day and her partner, Terry, injured it will a garden rake before it did any more damage. Hopefully it won’t be back a third time. They have two alpacas which live in the upper part of their 1 acre lot, but are now down with the chickens during the day to ward off predators.

I dropped by last weekend and her birds were clearly still in shock. They free-range and usually run out to greet me. No amount of coaxing and offers of treats could get them out of the brush. My photo shoot was somewhat impaired but I got a few good shots. 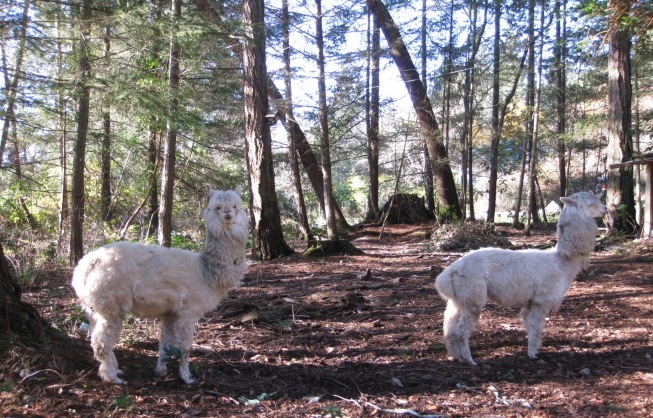 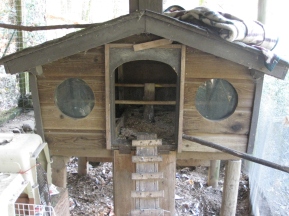 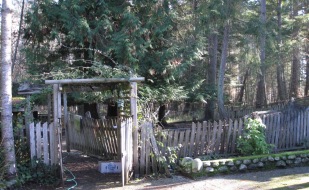 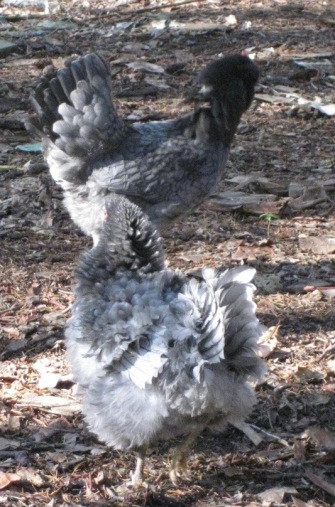 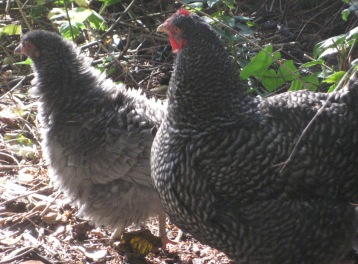 Her first chickens arrived almost five years ago – one of her original flock, a Black Australorp, was killed in the mink attack. Another was one she got from me: Ruby, a 5-year old Blue Laced Red Wyandotte x.

She’s got a combination of breeds in her flock of seven: Barbara, a Barred Rock the size of a small turkey (I hatched her and she has always been large), Lizzie, a bantam Cochin frizzle x Lavender Orpington (she’s the mother two of my frizzles), some Polish x and Appenzeller Spitzhauben x.

Laurie is a teacher of Business Communications and Marketing at a community college in Victoria – she’s there during the week and on Gabriola Island for the weekends. She bought property here in 2000 and moved her full-time in 2009. Terry followed the next year. She’s been toying with the idea of retiring and the mink attack sealed the deal – she’s decided to retire after next semester and be a full-time stay-at-home chicken mum. Laurie enjoys her job, but she loves her chickens more.