This is my first coop circa 2005. It was a structure on the property when we bought it – apparently the previous owners won it in a draw and used it as a playhouse, and then a sauna.

The summer after we moved in I converted it into a coop. Friends from Victoria had made the nest boxes at home and came with tools and supplies for a weekend visit. They made a pop door, modified the 3 windows so they opened and were protected by predator wire, and removed the wood from the ceiling so the beams were exposed bringing in more light and giving the birds a place to roost. It was plywood on the outside and shiplap on the inside so it was warm and dry throughout the winter.

As new chicken keepers we installed the nest boxes too high and they never really used them. 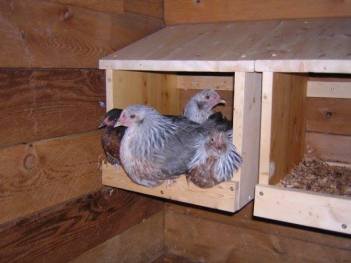 Unfortunately some of my early photos were lost when a previous computer bit the dust. Here are some before and after photos of the coop which I used for two years.

My first birds were Silver Grey Dorkings, Welsummers and Easter Eggers. They had a 400sq ft pen surrounding the coop, but they were mostly free ranging. Two were killed by hawks and my neighbours’ dog had a go at a couple as well (they survived).

Even though we live on acreage their free-ranging was a bit of an issue – they loved hanging out and pooping on the front porch, laying eggs in the woods and then they discovered the neighbours’ garden. I re-homed my birds and took a break for a couple of years, but decided to start anew with a different set up.

The old coop has since been renovated and added on to and is being used as an art studio by my partner. Our builder added a chicken tile on the front door as a nod to its previous life. You’ll notice we moved the door from the front to one side, added an overhang and extended the back with a shed roof.

Our builder added a chicken tile on the front door as a nod to its previous life.

Front (Door Relocated To The Side)

Side View With Covered Entry