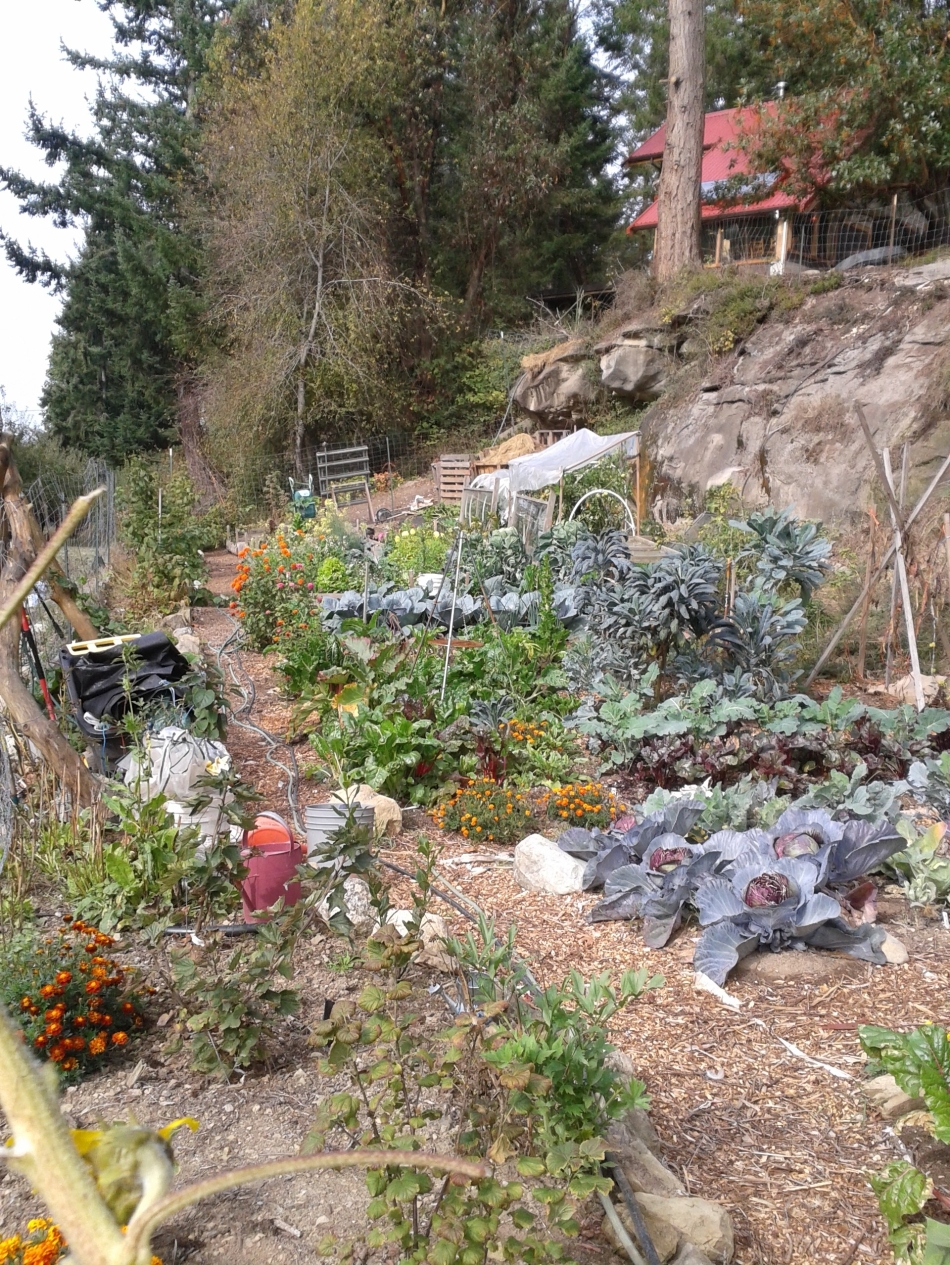 What do Count Dracula, Romela and Emanuel, and Naked Neck Chickens have in common? If you said they can all trace their roots to Transylvania, a region in Romania, you get a gold star. Go to the head of the class.

I don’t know much more about Vlad The Impaler than what I’ve gleaned from watching horror movies in my childhood, but I’m hoping to impart some information about the others. I’ve met Romela and Emanuel a few times over the years – when we’ve traded hatching eggs or birds – and found out bits and pieces about them.

A few weeks ago I gave them a Transylvanian Naked Neck cockerel. If you’ve never seen one they look like a regular chicken with a featherless neck, a genetic mutation caused by a feather blocking molecule. Some mutations have negative impacts, but not so in this case. Their bald necks make them more resistant to heat which increases their egg production.

This guy is a cross (Marans x Naked Neck mother and Appenzeller Spitzhauben x Polish father) so he’s only carrying one NN gene. That means he’s only got a partial naked neck and sports a ‘bow tie’. If he was carrying two NN genes, he’d have a completely bare neck and would be referred to as a ‘stripper’. I find they are one of those things that you either love, or not. 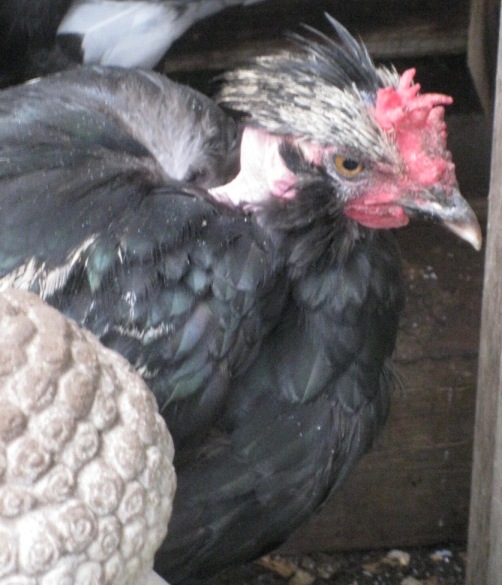 Dropping off the cockerel was a good opportunity for me to learn a bit more about Romela and Em. They came to Canada in 1993 with two young daughters and undergraduate degrees in Electrical Engineering. They settled in Edmonton where the cost of living was reasonable and close to a university where they could continue their studies: both obtained Masters in Engineering degrees.

Romela’s work required traveling to various communities to visit project sites. Sometimes she travelled via commercial airlines, but other times in small 4 or 5-seater aircraft. On one occasion, she and Em were on vacation so she was unable to attend a staff retreat. The plane carrying her colleagues ran into bad weather and crashed, killing two of them.

Another time, she was asked to give up her seat for a client and take a later flight. Being bumped that day saved her life. The plane, experiencing mechanical issues, went down killing all five people on board (including the son of the company owner who was killed in the previous accident, just five months before).

Two brushes with death is more than enough to force you to re-evaluate what’s important in life. The co-workers who died were relatively young, many with children and lives ahead of them. Losing people you know makes you look at what you are doing and what you want to be doing. Hopefully the two coincide – if not, a change is in order.

Just two years after immigrating to Canada, Romela and Em had visited Tofino and fell in love with the west coast. Being city folks, they began to hatch a retirement plan to settle in Victoria. On one of many subsequent trips, they discovered Gabriola and set their sights to moving west, sooner rather than later.

In 2008, they both landed jobs with an Albertan company that had various water facilities in British Columbia. They decided to make Gabriola their home base, traveling to different work sites. When that company pulled out of working in B.C., Romela and Em stayed. They started their own company and, not without struggle, were able to obtain some work contracts and do much of their work telecommuting for engineering projects across Canada.

Four years later, they moved from a ½ acre property with four goats, seven beehives and a dozen chickens to a 7 acre, long-term farming project. The property is on two levels: the upper forested area contains a house, cottage, workshop and most of the animal housing. On the day I went it was overcast, but from the house and decks you can see the ocean through the trees. 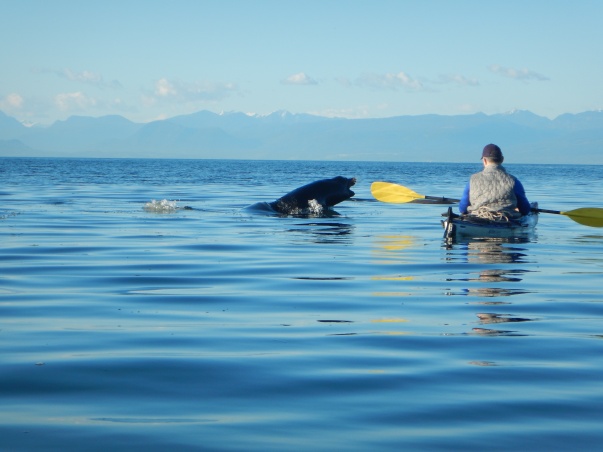 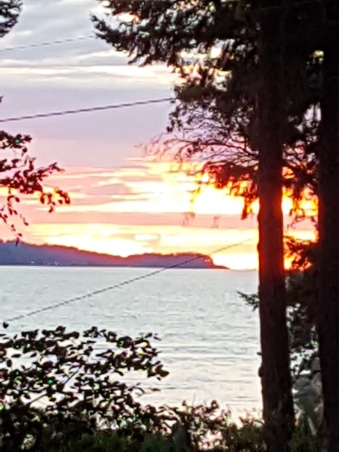 View From Their House

The lower level, accessed by a switchback trail, has a flat grassy area where the donkeys and goats spend the summer. There’s a pond, garden and home of the future greenhouse. They’ve been collecting an assortment of windows and have a site chosen at the base of a rock wall. The footings are already in place, but there’s a lot of work to do before it’s done.

The old shop and a few other buildings were non-conforming and didn’t meet building codes, so had to be removed. First on the list was to build a new shop to accommodate all their tools. The house and cottage, in spite of conforming, were in poor condition and needed major upgrades. They’ve lived in both the cottage and the house, switching between them while they were renovating. Taking a year off work, they dipped into their savings, and learned how to do a lot of the work themselves. 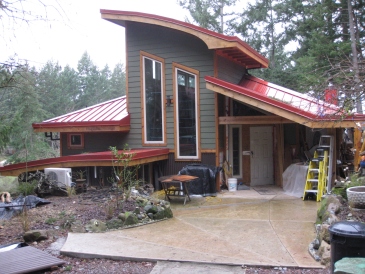 What’s the saying ‘If you want something done give it to a busy person’? That applies to them: this couple are dynamos: resourceful, creative and capable.

“When not working we enjoy lunch on the beach, sunset kayaking and cycling for groceries or other needs. Gabriola is perfect for these activities year round. Making time for all our needs and wants is a daily struggle. There’s a saying: ‘If 24 hours in a day are not enough you should wake up an hour earlier’.  That’s what we do.” – Romela

They’ve turned salvaged building materials into beautiful pieces of furniture and with the help of a great neighbour they learned how to do concrete work and have built landings, stairs and retaining walls. They bought a sawmill to cut all their own beams and make lumber for the window trim, kitchen cabinets and all the other furniture. Most of the wood – fir, cedar and maple – came from their own property.

Another friend turned a massive old yew tree into beautifully matched kitchen cupboards and a dining table. On rare occasions when they aren’t doing the work themselves you can see their vision throughout.

There are all kinds of quirky touches that reflect their creativity. Instead of building a conventional wall in the cottage’s loft bedroom, Em made a bank of what appears to be a wall of drawers, joined at odd angles; from the back it’s an open bookshelf accessible from the bedroom. Or the coffee tables whose base are carved human feet – a nod to the time when mysterious feet were washing up on our shores. 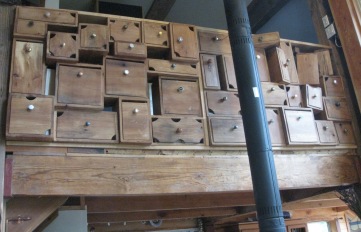 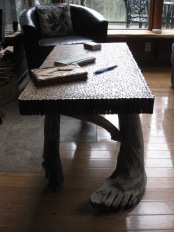 The menagerie has grown as well: the animals that came with them have been joined by four goats (one Nubian x and three Angoras) and about 65 free-ranging chickens. Romela wondered how the flock could have grown exponentially, but anyone who’s kept chickens understands the basics of chicken math. How can you just have a few? There are the older hens, still healthy, enjoying their retirement; the beautiful or the unusual; the ones with personality or great layers; roosters for protecting the flock. And voila: before you know it you’ve got 65 chickens. 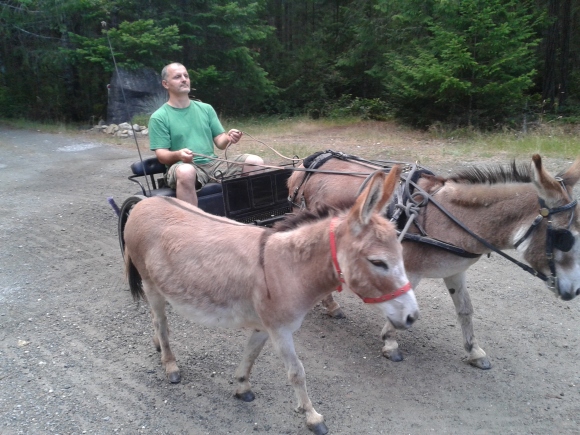 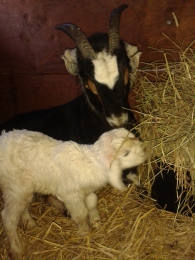 They have learned to take care of the animals themselves: shearing goats, trimming hooves, giving vaccinations, diagnosing medical issues, delivering and rearing babies. Their philosophy is to be as self-sufficient as possible and to save money by acquiring the skills to do so. Romela and Em’s next project is rebuilding some of the make-shift structures that they converted into animal housing over 6 years ago.

The house renovation is still a work in progress. They’ve made a small self-contained suite on the lower level for Romela’s mother, who joined them from Romania, at the age of 76, almost four years ago. They have their own spaces but share some meals throughout the week. The cottage has space for visiting relatives living in Canada or from overseas, who come not just for days, but sometimes for weeks. One daughter, who lives in Victoria with her family, stays there and their other daughter can visit easily, as she lives on a boat moored on Gabriola.

Their 3 1/2 year old grandson from Victoria visits often. He accompanies his grandparents with their morning chores feeding the animals and cleaning up donkey manure in exchange for a donkey ride. He has his own wheelbarrow to carry the manure to the compost pile or do other garden tasks. His reward: a special Farmer’s Breakfast of goat milk and a freshly laid green egg. 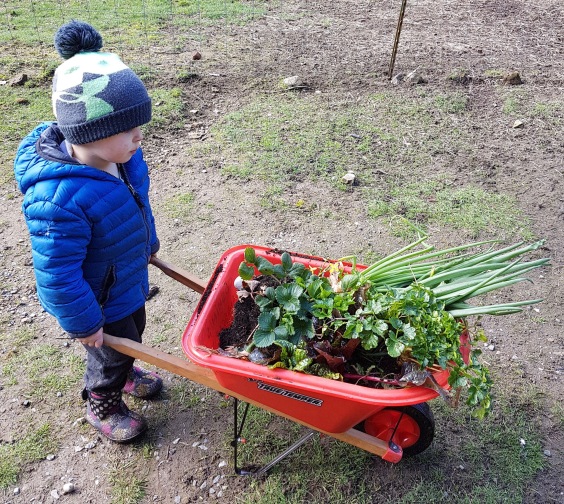 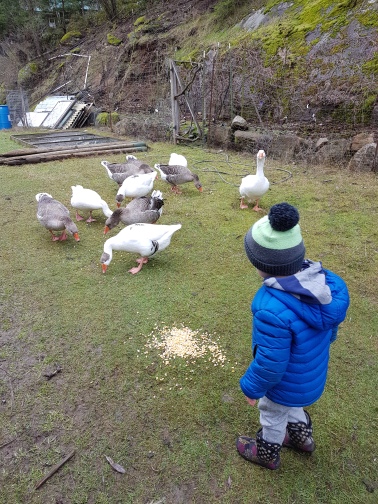 I’ve seen their property change over the last few years: from teardown buildings to beautiful spaces, establishing gardens and the expansion of their farm. Romela and Emanuel have transformed their little plot of land into an expression of their creativity and a statement for how they want to live in the world. We never know how the decisions we make, coincidences or luck of the draw happenings might affect us, but simply being bumped from a flight might have changed the future for all of them.