EJ and Mike have lived together on three continents: they met at Griffith University (Brisbane, Australia) in the Environmental Studies program, then bounced between there, England and Canada before Mike immigrated here 21 years ago. Their first place on Gabriola was a boat, where they lived with their son, Lindsay, until he was six or seven.

I met them in 2005 when they were my neighbours, just down the road, where they lived on a ½ acre lot in a small house. EJ’s mum, Joy, stayed for a few months each year in an RV, returning to Ontario in the summer. Back then they only had Call Ducks. I’d hear the occasional story of raccoon attacks, including the time EJ followed a raccoon, that had snatched a duck, up a tree. She had to hit it with a broom until it dropped its prey aptly named Hermes, The Duck That Lived.

Six years ago they moved to a 5 acre property just behind me – so they are still my neighbours. Not only do they have more land, they’ve got more buildings: a house, a cottage, workshop and a chicken coop.

Lindsay left home last fall. He studied to be a Heavy Duty Mechanic at VIU, intending to continue in the Engineering program, but it seems he’s got a new interest: Geology and Earth Sciences. Empty nesters, EJ and Mike live in the main house. Joy now lives with them full-time in the original 400 sq. ft. log cabin – plus a 200 sq. ft. solarium added last year – which has given her not only more space, but more light.

EJ works for New Society Publishers (NSP) as their Sales Manager and manages to squeeze in one shift a week as a GERTIE bus driver. An avid skier, she snagged driving the ‘snow bus’ charter run taking folks from Gabriola to Mt. Washington for a day on the slopes. Mike worked for the Georgia Strait Alliance for 13 years in the Green Boating and Clean Marine BC Program. He’s now the Grants Manager for the Islands Trust.

They gave me a tour of their place. First stop: putting the rabbits in their hutch. Lindsay rescued some baby bunnies, hand fed them and then found homes for some and kept two. He wasn’t able to have them at his rental place so his parents have stepped in to care for them. They’ve got a great outdoor wired pen and hutch. Spike is ‘special needs’, having been born with a deformity that makes her a bit wobbly. In order to sit upright she props herself against something for support. Lindsay left a to-do list of rabbit care, including brushing Spike, who can’t reach everywhere to properly clean herself. Strong proponents of neutering they had both their bunnies fixed, just in case they escaped and became feral, to prevent them from reproducing in this sensitive ecosystem.

They’ve had chickens in Australia and here. Their current flock consists of some rescue birds: eight hens: barnyard mixes of ISA Brown, Buff Orpington, Easter Eggers. They’ve also got two roosters that came from Thomas and Elizabeth. Their head rooster, Rhett, has proved to be a star: he’s fought off a mink more than once. He also survived a near death experience: somehow he got his foot entangled in the fence and was hanging upside down (no one knows for how long) until EJ found him and got him unstuck.

I knew they had predators at their old place and turns out they’ve had a few here too: ravens that learned to steal eggs out of the coop (but have since stopped), raccoons and mink. They brought their Call Ducks with them when they moved but, between the mink and raccoons, they’ve been wiped out. Looks like they’ll just stick with chickens.

One time, EJ inadvertently locked a mink in the coop overnight and in the morning found carnage. She killed the mink, which is an experience she’d like never having to repeat. I don’t blame her. I’m always knocking on wood, trying not to tempt fate, by boasting how few predators I’ve had to contend with. I’m not sure what I’d do faced with a coop full of dead birds and a predator that’s likely to come back.

The previous home owner built a well-designed coop: you can walk inside to access the nest boxes and the attic hay storage. There’s a droppings board under the roost bar which is accessed from a trap door outside. The board rolls outside and the poop can be scraped off into a wheelbarrow. Genius. As you can see, the chickens were a bit shy and have plenty of cover so it was difficult to get them to pose for the camera.

We circled through the woods past their workshop, through the fenced garden and in front of the house to a dojo, which was made from a converted carport. 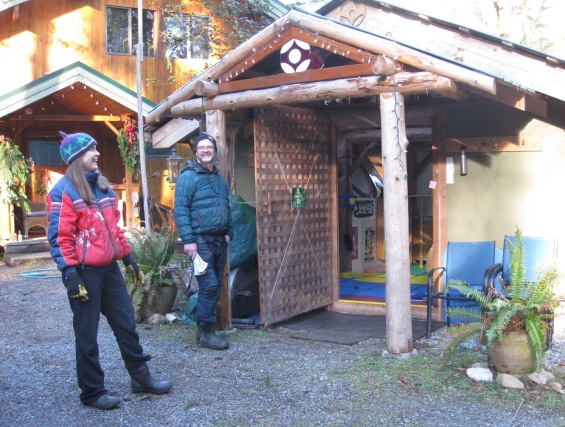 When EJ lived in Yellowknife she started taking a karate class after aerobics, thinking it would be a great way to get fit and learn something new. After they married in Australia both of them did karate, but different styles in different towns. They’ve now settled on training in the same style: Kyokushin, a traditional, full contact style of karate. Mike is a three degree black belt, EJ a second degree black belt and the first woman in a decade to have achieved that rank in this region. She used to teach kick boxing and they currently offer fighting and fitness classes at their home dojo for members of the karate class.

It sounds like some of that fighting prowess also rubbed off on Rhett, their hero rooster, who’s looked predators in the eye, kicked butt and lived to tell the tale.