Folks who work in high-pressure jobs that deal with the darker side of life – cops, paramedics, emergency room personnel – are often known for their dark senses of humour. In their case, it’s not about disrespect, but a way of managing difficult situations. Levity breaks the tension and allows you to keep moving forward without cracking up.

If my title seems a bit inappropriate, it’s a reflection of a tough month coping with recurring health emergencies with one of my favourite hens. She, and her half-sister and hatchmate, Skye, have been two of my friendliest and most striking birds so it’s been difficult figuring out what was going on and weighing what was the best course of action.

I have written two other pieces involving Corazon, my 10 month old Appenzeller Spitzhauben x hen. The first involved a minor prolapse after passing a soft-shelled egg, which was following by a series of major prolapses which I attempted, unsuccessfully, to manage.

I made the difficult decision to have her euthanized by my friend Thomas, who gave me back some interesting ‘pieces’ he found during the necropsy. I immediately recognized the classic signs of a salpingitis infection, commonly referred to as ‘lash egg’. I was curious to know more.

I sent Corazon’s case history and the necropsy photos to Dr Vicki Bowes, Avian Pathologist, at the Animal Health Centre in Abbotsford, B.C. I was interested in her opinion and wanted an explanation for what happened. Had I known she had an infection I would have sent Corazon’s body to the Lab for a complete analysis. It’s worth getting a professional necropsy for a full and accurate picture of issues affecting your flock.

I included the following information and questions:

Thanks for sharing your juicy pictures (you have to love a woman who thinks necropsy photos are interesting). What I see definitely started their life as ova (yolk) but couldn’t complete the process of forming the egg to be laid. The laminated layers are fibrin (inflammatory exudate). My best guess is that they could have been there 7-10 days, possible longer but the process has been ongoing. 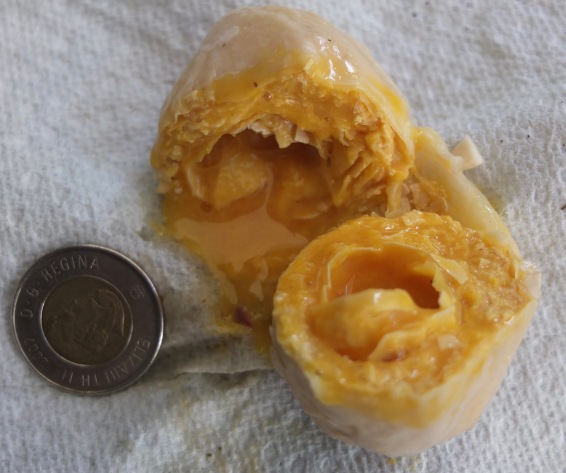 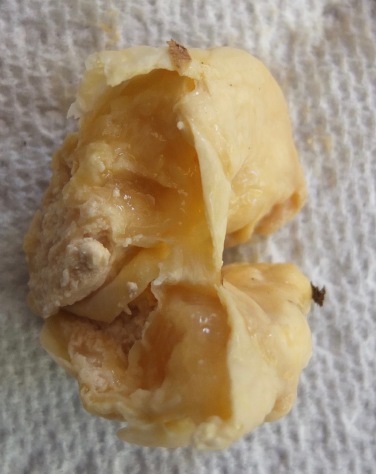 Based on the history of chronic prolapse you can write the story either way, but since salpingitis is extremely common and it is RARELY associated with prolapse I favour the theory that the prolapse generated physical obstruction which is why the eggs backed up, unable to pass despite straining. Only a culture would reveal if there were any bacteria involved, as we see in bacterial salpingitis without prolapse.

Initial prolapses are easy to push back in, but without a ligation (i.e purse string suture) to set it back in place and keep it there, chronic prolapses are inevitable. The exposure of that delicate mucous membrane to the air then leads to swelling, inflammation, scarring & cannibalism and that is what causes the physical obstruction to egg laying. If she stayed in lay then internal lay would be a secondary consequence. The fact she was “perky” suggests a lack of bacterial infection, or at least a very localized one.

Common causes of prolapse are: excessive abdominal fat, excessively large eggs or small pelvic frame for the size of eggs, infection of the vent (bacteria or fungus  (look up “vent gleet”), local tumours (this could be your answer since the bursa can develop tumours with Marek’s Disease and Leucosis).

Not much to change going forward but keep your eye on the other girls for similar issues.

I’m hoping if you ever have to deal with a prolapsed vent you can learn from my experience and save yourself some heartache and your hen some undue suffering. Consider sending a culled bird (or one who dies unexpectedly) for a necropsy to see what their analysis reveals. I’m most appreciative of the information I received.