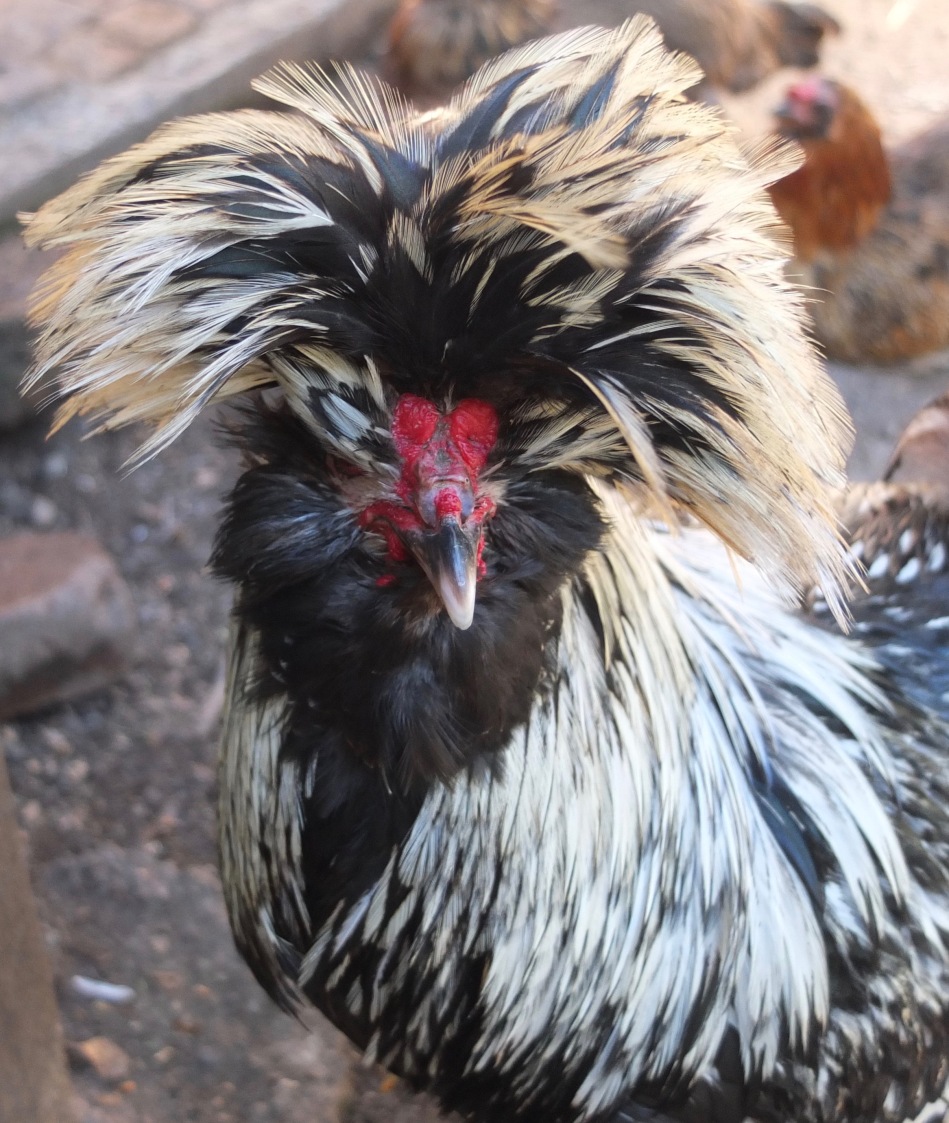 I got my first chickens in the summer of 2005. I didn’t know much about chicken keeping, didn’t know anyone who had chickens and online sources of information were just starting out. I bought thirteen chicks: five sexed pullets and eight straight-run. I wanted a few girls for eggs and entertainment and had no plans to have a rooster. All I knew about roosters is they crowed and that could be annoying, for both us and our neighbours. My luck, I ended up with five cockerels – beautiful boys, but they all ended up at ‘The Cluck Stops Here’ (that’s not a euphemism, it’s a real place).

I kept those girls for a couple of years, quite happily without a rooster. Only a couple went sort of broody and it was easy to dissuade them from sitting on infertile eggs for more than a day or two. I re-homed all my birds and then took a four-year hiatus. In 2011, I started up again with four sexed pullets; one went broody the next year – I got fertilized eggs from friends, kept some of her daughters, but re-homed the boys. That continued for a couple of years as my flock grew – but still no rooster.

In the spring of 2014, I was driving along one of our main roads and a colourful rooster caught my eye. I tried to get close, but he bolted into the bushes. He stayed there, in a grassy patch at the side of the road, for a couple of weeks. I posted a found ad on our local FB community bulletin board. Other folks had seen him, but no one claimed him. I’m sure he was the victim of someone dumping unwanted an rooster with the thought that he’d either survive, or be a meal for predators, but either way it wouldn’t be their problem anymore.

The latter is what ended up happening. It was only after some animal attacked him and he was injured that he allowed someone to pick him up. His rescuer didn’t have chickens so I stepped up to foster him. Long story, short: by the time I had him for a couple of weeks I couldn’t imagine giving him away. When I saw Isaac by the side of the road I had no idea how small he was. He was a Japanese Black Tailed Buff bantam, now living with a group of hens, all double his size. Bantam chickens are like small dogs – they aren’t really aware of their size.

Anyone who has chickens knows there are the ones you don’t quite notice, that don’t stand out for any particular reason and those that have a big personality: are companionable, friendly and entertaining. That was Isaac. He was the first to say hello when I came home, hopping up on the bench beside me to eat treats. He let me pick him up and carry him around. He was good with the girls, loved chicks and had some kids of his own (both with other bantam, and standard, sized hens). He was a presence in the yard.

Having Coffee With Isaac 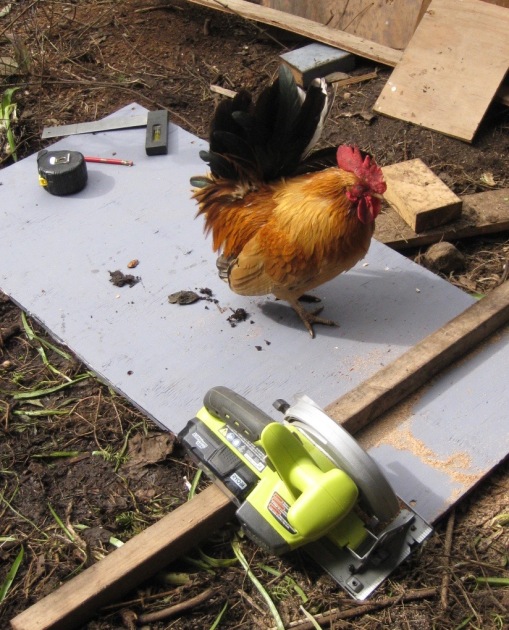 Isaac Helping With The Coop Reno

I had him for four years before he died. During his reign, I kept one cockerel each year hoping he’d be compatible with Isaac and would be part of a breeding program. Each year, unfortunately that wasn’t to be the case.

In 2015, I kept a cockerel from my friends’ hatching eggs. Thomas’ dad was a purebred Silver Laced Polish and his mum an Easter Egger (cross unknown) who came from an olive egg. He was the start of my line of crested chickens and was an interesting colour – silver and grey rather than laced, with a funky duplex comb (combination of two styles).

One evening when I went to lock up the flock he kept going into the storage shed, trying to get my attention. I couldn’t find anything amiss, but he was persistent. I pulled several things out of the way and there, at the back, on the ground, was a green garbage bag moving slightly. At first I thought it might be a rat, but upon opening it, I discovered one of my Appenzeller Spitzhauben hens had climbed into the bag, fallen three feet and then rolled onto the ground and was stuck at the back of the shed, totally unseen. She surely would have suffocated had Thomas not come to the rescue. 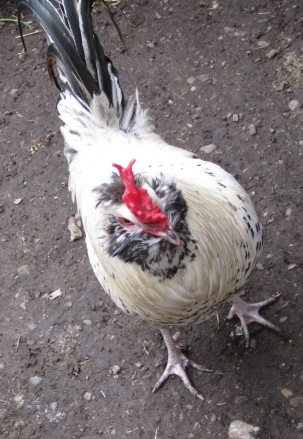 Thomas started off deferring to Isaac, but as he got bigger and more confident, asserted his dominance so that Isaac’s safety was at risk. If you know chickens they can be adversarial and fight to the death. I would have loved to have kept him, but Isaac had a special place in my heart so I chose him. Thomas went off to a great home: a farm on seven acres with a flock of hens and no male competition.

That summer I kept Levi (Silver Laced Polish- Easter Egger x Silver Spangled Appenzeller Spitzhauben) one of Thomas’ sons. He was a friendly cockerel that I had hoped would be a pullet. No such luck. Following in his dad’s footsteps he also started to be aggressive with Isaac, so was re-homed to a farm. 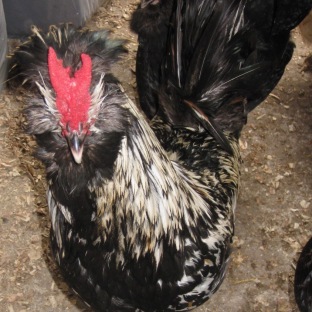 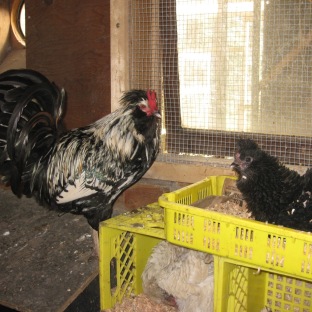 Levi Overseeing Nox In The Nestbox

My current rooster Simon (¾ Silver Spangled Appenzeller Spitzhauben x ¼ Silver Laced Polish-Easter Egger) is Thomas’ grandson. I had built a new coop and pen just around the time he started to mature and compete with Isaac as top dog. It was intended to be my grow-out pen for the teenagers, but I moved Isaac in with them. He loved teaching them, calling them over for food, rounding up everyone for bedtime. 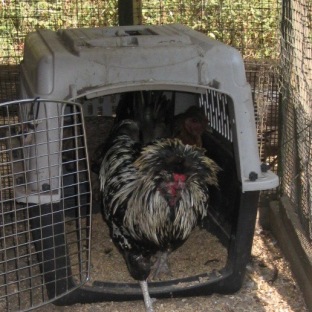 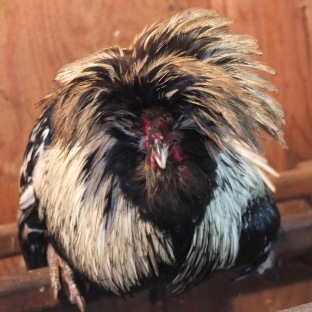 I often see posts in Facebook farm groups, especially from first-time chicken keepers asking if they should get a rooster or not. I’m surprised when many people try to dissuade them, feeling that roosters are superfluous and play no role, other than reproductive. If you’ve ever had a good rooster you know that’s not true.

Chickens are flock animals. They develop a hierarchy (pecking order), have a communication system and social order. It’s unnatural to remove all males from a group. In the wild, there would be one dominant, and several subordinate, roosters within a flock, as well as bachelor flocks. Most folks who have a rooster have a fairly high ratio of males to females (1:10). I often have 25-30 hens with just one rooster.

Clearly, I haven’t found a way to keep two compatible roosters, and frankly, I found they crowed more often when they weren’t the only one. Some folks love the sound of crowing. In consideration for my partner and neighbours I try to keep it to a minimum.

Roosters don’t just provide eye-candy or are a necessary component of reproduction. They have a number of functions and a good rooster will perform them well:

Often people who buy, or hatch their own, chicks are sad when their favourite grows up to be a cockerel. One of the difficulties of having chickens is you can’t keep them all and you certainly can’t have a 1:1 ratio of hens and roosters. In my opinion, many people keep too many roosters for the number of hens they have. Ideally you’d have one rooster for every ten-twenty hens. If the balance is off there may be competition and fighting between the males and over-mating of the females. Chickens are sensitive to stressors and imbalance in flock dynamics is one of them.

When getting chickens think about what you’ll do if you end up with a rooster. Even buying sexed chicks is no guarantee – hatcheries often make mistakes.

Cultivate a relationship with all your birds. Spend time with them when they are young. I’ve often found the friendliest and most curious chicks were cockerels. I’ve resisted the temptation to keep them all and my flock is happy with that decision.