I’ve been very fortunate when it comes to dealing with predators. I lost two from my first free-ranging flock to hawks. Two in two years wasn’t bad. I took a four year break from chicken keeping, got a new coop and situated it inside a 1200 square feet pen. It is wired with deer fencing, which won’t keep out mink or raccoons, but will deter neighbourhood dogs and keep my birds in. I lost four birds in two years: all bantams, which are no match for a hawk, large or small.

Within my pen are four fruit trees and a three-sided storage shed, which made overhead netting problematic. I added an 8’x8’x6’ tarped dust bath area and a 10’x20’ car canopy (2/3 of it is tarped) then strung 6’ plastic deer netting from one side to the other, twist tying the rows together. It’s not perfect but it has worked to keep the aerial predators out. 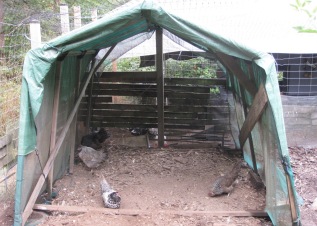 Of course, the wired sides are still vulnerable to other predators. I had my first mink encounter in May – it came by twice in one day and despite setting live traps I wasn’t able to catch it. The good news is I haven’t seen it since. I had one daylight raccoon attack in the summer of 2016, but was able to rescue my injured hen, who made a full recovery. I’ve seen the odd raccoon around and occasionally spot their tracks in the snow so I know they are around. The belief that once a predator has found a prey source they will be back until they wipe out your flock or you dispatch it has not been true in my case. 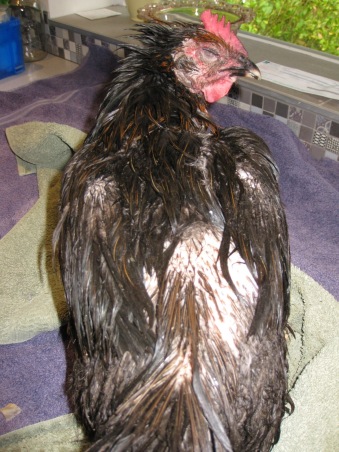 Last week, I went out to make sure no birds was in sight, confident that everyone was safely ensconced in their coop. Saturday morning revealed my error: I first noticed that the overflow hose from my rainwater catchment system was dislodged, and then saw clumps of feathers on the cistern stand. At first I didn’t clue in: the flock was happily scratching, no one was on alert, no one looked injured. When I spotted more feathers up against, and outside the fence, I knew there was trouble. The feathers were black so I did a quick scan to see who was missing. It only took a moment to figure out the Bif Naked’s (Naked Neck x Black Copper Marans) daughter was nowhere to be seen.

I headed out of the pen and followed the trail: feathers, more feathers, some guts and then, 10 metres from the coop lay the pullet’s ravaged body at the side of my driveway. Hawks and mink might kill chickens, but they wouldn’t carry them out of the pen. 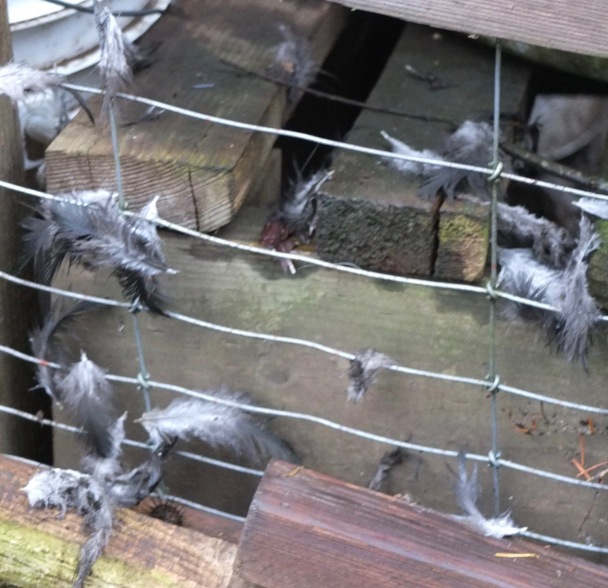 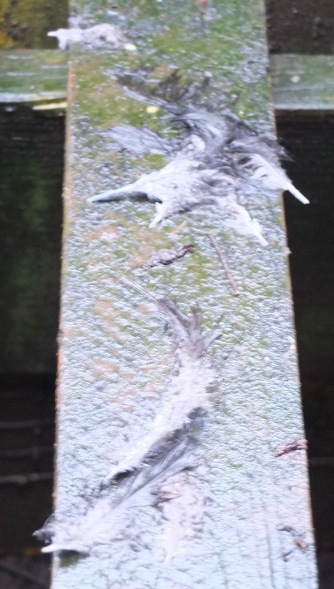 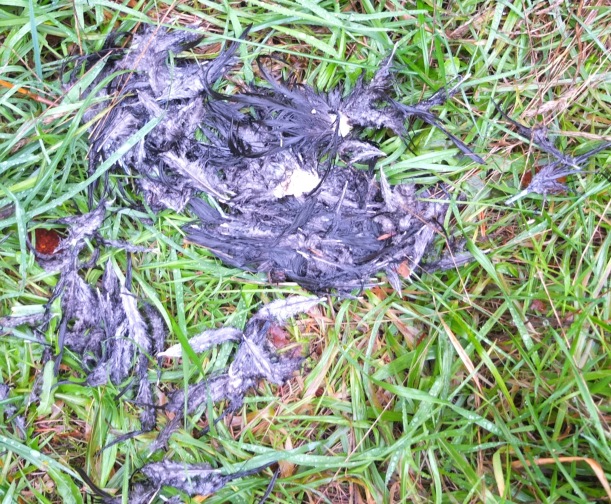 It was 9:20 a.m. The birds had only been out of the coop for less than two hours. I couldn’t figure out how a predator could have done that amount of damage in that time frame without the flock raising the alarm. They are known to alert for long after they’ve seen an aerial predator overhead. Why hadn’t I heard them? Why were they going about their business like nothing was amiss? I would have expected them to have run for the coop or be huddling under the trees. Then it occurred to me: the predator had not happened by that morning, but had been there the night before.

Six months ago, I made the grisly discovery of the remains of one of my pullets. Unbeknownst to me she had been laying eggs on the ground at the back of the storage shed. On the first night decided to start incubating her clutch of 14 eggs a lucky raccoon reached under the shed wall and killed her. She missed night time lock up so I can’t blame a predator for being opportunistic in finding a tasty meal. 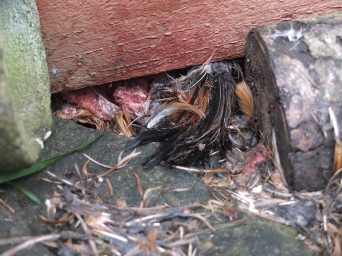 I have an automatic door that opens and closes on a solar sensor. Even so, I always go out to check that everyone made it in safely for the night, especially when I’ve got young birds. Lately the flock, prompted by the shorter days, has been tucked up for the night by 4 p.m. Sometimes the teenagers go into the storage shed, but no one has ever missed bedtime. The naked neck pullet must have been in the shed, when I passed by, did not see her at lock up. I’m not sure if raccoons have a great sense of smell or can sense warmth from a sleeping animal, but they must have climbed through the fence. The feather evidence showed a trail where it trapped her against the fence and then dragged her over top. It hauled her body someway off where it ate most of her.

Whenever I have chicken losses, native birds hit the window or I trap rats I put them out on a stump for hawks, ravens and perhaps raccoons. It feeds them and hasn’t encouraged them to bother my birds. I added her body to the stump. Within an hour a raven was scavenging on her. By the next morning, there was no sign of her body. Something had carried her away in the woods.

0 comments on “Forensic Investigation: The Sequel”