More mysterious than the age-old question ‘Which came first, the chicken or the egg?’ is the marvel of that perfect little orb that most of us eat and take for granted. An egg is made from the inside out and here’s a quick tour on how that miracle of nature happens.

The reproductive tract of a hen is divided into two major parts: the ovary and the oviduct, which are central to the formation of eggs. A pullet is born with two ovaries, but as she matures the right ovary remains undeveloped and only the left one becomes fully functional. That ovary contains all the undeveloped yolks the pullet was born with, which represent the maximum number of eggs she could lay within her lifetime.

When a pullet reaches laying age, one by one the tiny yolks mature, so at any given time during her productive life, her body contains yolks at various stages of development. Each yolk receives nutrients through a network of blood vessels that surround the yolk. Within about two weeks, a tiny yolk grows to a diameter of about one inch. The network of vessels then ruptures to release the yolk from the ovary.

A blood (or meat) spot) is caused by the rupture of a blood vessel on the yolk surface when it’s being formed or by a similar accident in the wall of the oviduct. They may not look appetizing, but they are fine to eat.

The two-foot long oviduct consists of five compartments, each with a different function. If fertilization takes place, it will occur as the egg passes through the oviduct’s funnel, the infundibulum. The yolk then spends the next three hours spiraling through the oviduct’s magnum where it becomes surrounded in egg white, mainly consisting of protein, water and minerals.

The egg then carries on where it grows two connecting chalaza strands (made of twisted albumen) at the top and bottom, which anchor the yolk to the shell keeping it in the centre of the egg.

Next in spends about an hour in the isthmus, where it is covered in two thin, protective membranes.

Now comes the longest and most interesting part of the egg’s journey. The membrane-enclosed egg enters the shell gland, where it spends the next twenty hours. It is plumped up with fluid until it achieves its egg shape and then is encased within a hard shell consisting of calcium carbonate crystals. Pigment is added giving the shell its colour. A hen inherits one shell pigment gene from each of her parents, and it is the hen that determines the colour of the eggs she lays.

The hardened egg shell is next enveloped in a fast-drying protein solution called the bloom (or cuticle) that seals the tiny pores, protecting it from bacteria. If you wash your eggs before refrigerating them you remove the bloom making them more vulnerable to contamination.

The egg is oriented to lead with its pointed end, but just before it is laid, the egg enters the hen’s vagina, where it rotates so the wide end comes out first. This makes it less likely to crack than if it were to fall pointed end first. 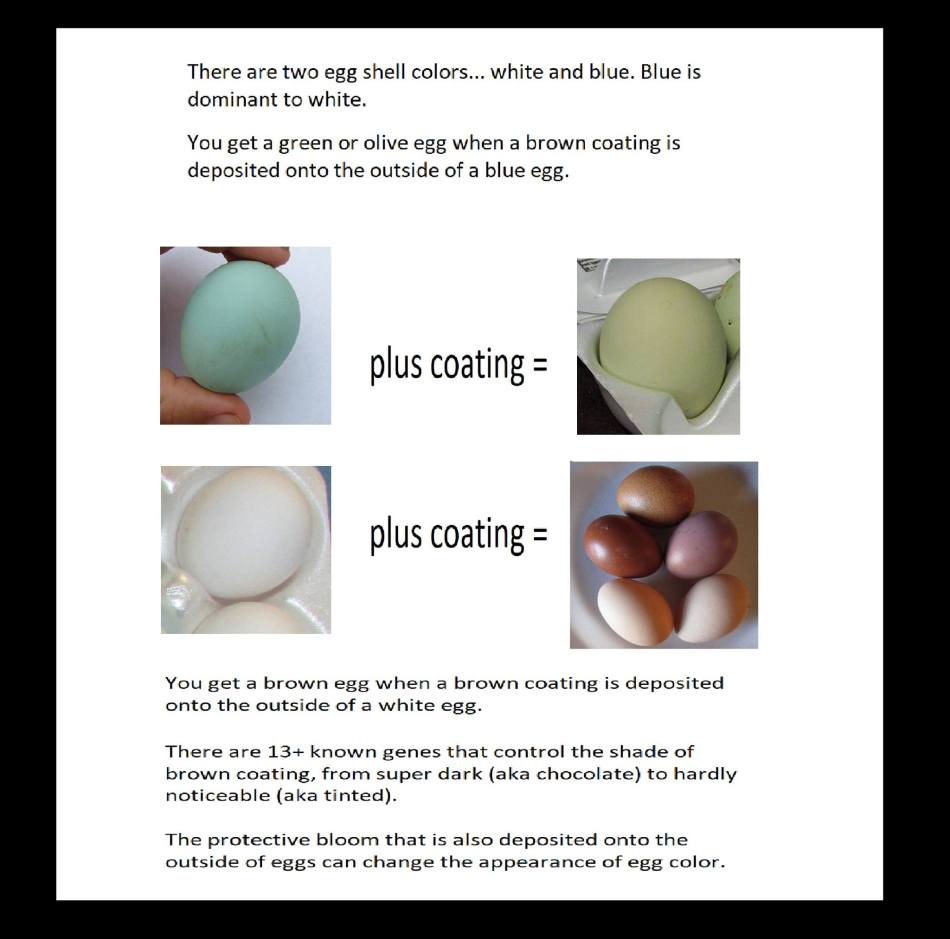 This whole process takes 24-26 hours. Within an hour of laying the next ova will be released starting this process all over again.

Since a hen’s reproductive system slows down during the night, eventually she’ll skip a day and start a new multiple-day laying cycle the following morning, which explains why a hen doesn’t lay an egg every day.