It’s pretty much spring in my area, but for many chicken keepers it’s still winter. No matter what the weather folks often use heat lamps to keep their flock warm or when they are raising chicks. Others have electricity in their coop and use lights during the dark months to encourage their hens to keep laying.

Regardless of what you are using, electricity and coops can often be a risky, and sometimes deadly, combination. You only have to scroll through a Facebook farm group to hear the sad tale of a coop fire which wiped out a whole flock (and sometimes outbuildings and houses). Or stories which make the news of commercial operations that experience a fire killing thousands of livestock in one fell swoop.

These photos are of a coop, before and after it was destroyed (along with the flock) by a fire. 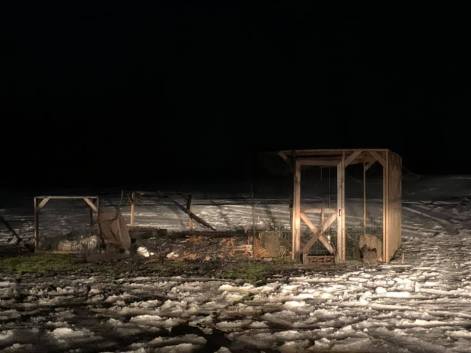 And another coop fire caused by a heat lamp. Luckily there were no casualties. 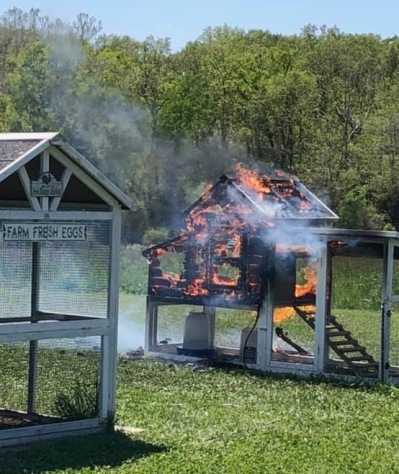 I have two coops: one with electricity and one without. I have to admit it’s a real convenience having access to plugs and lights in my coop, but I’m pretty vigilant about the risk it poses for potential fire. My coop is wired using a heavy duty extension cord run from my house. The section that travels across my driveway is buried in conduit to protect it from damage. I only use lights when I’m in the coop to help me see, but otherwise they are turned off. I usually have broody hens hatch chicks so don’t require heat lamps. I have, however, had a couple of occasions when I’ve had chicks that need heat.

One time I had chicks in a brooder and thought I had clamped the lamp securely to the window frame. When I entered the coop I smelled the slight scent of burning and saw the lamp had slumped and the bulb was touching the plywood wall. If that had happened at night or when I wasn’t home I might have had a disaster on my hands.

Since then, I have secured the lamp properly: it is suspended by a chain from the ceiling and a bungee cord holds it so there is no possibility it can touch the wall. Even so, I am cautious around anything that might cause a fire.

Here are a few tips on how you can use electrical appliances and still keep your birds safe:

Chicks need a heat source until they are fully feathered around 6-8 weeks of age. When using a heat lamp make sure it is well secured, has a wire cage attachment to protect the bulb and is out of reach from chicks that could fly up and bump it. Don’t trust the clamps. They can slip, causing the bulb to fall and set bedding on fire. Or in my case, touch the wooden wall which is an ideal fire starter.

Some folks who live in very cold places use supplemental heat in the winter to keep the chickens warmer. Feathers are an ideal insulator. By heating the coop you are acclimating them to higher temperatures, which make it more difficult when they are outside away from the heat or if there is a power outage. Of greater concern than keeping your birds warm is protecting their combs, wattles and feet from frostbite.

If you are providing a lamp for your hens to encourage them to maintain their egg production, make sure the bulb is protected with a wire cage and put on a timer so they don’t get more than 14-16 hours/day.

Alternatives to heat lamps are heat plates or pads. Heat plates are a bit more expensive than heat lamps, but they are built to last longer and you won’t have bulbs to replace. Most heat plates come with adjustable legs so you can raise the plate as your chicks grow.

Extension cords can become a fire hazard when they are used improperly. Always make sure the cord you are using is properly rated for the job and environment that it’s in. Monitor your cord to ensure it is intact and there are no exposed wires.

Shavings and straw are both great bedding but they are also highly flammable. If you use them, make sure those materials are not close to the bulb.

An alternative bedding material is sand. I’ve never used it, but some folks swear by sand. It does drain well and is fairly inexpensive, but is also a medium for bacteria to grow, can freeze when wet and is heavy to remove.

I’m lucky to live in a temperate climate. I have to deal with frozen waterers for less than two weeks a year so it’s not worth the bother for me to get a heated waterer. I just carry fresh water out in the morning and then again, during the day.

You can purchase heated waterers or make your own – they are fairly safe to use and most are activated only when the temperature falls below freezing. Their risk is the misuse of an extension cord or overloaded circuit.

My coop is pretty close to my house, but if yours is out of sight or hearing you might install a wireless smoke detector that notifies your phone in case of fire.

Several of my chicken keeping friends have a camera or baby monitor set up in their coops. They’re a way to monitor flock behavior, egg laying, identifying predators and checking out emergencies, like fire, when you’re not on site.

I collect rainwater in two 50-gallon cisterns inside my 1200 square feet pen. Just outside my pen I have access to a hose that would easily reach my coop. Think about your water sources and how you’d get it to your coop in an emergency. A fire extinguisher is a helpful item to have on hand as well.

Outlets and switch boxes should be made of metal and have spring-loaded covers that close when released. Ground fault receptacles should be utilized for all outlets.

If you use extension cords, use heavy duty outdoor ones. Make sure they are all intact, have no tears in the coating and aren’t overloaded. Place them in an underground conduit to protect them.

Don’t place heat lamps too close to hay and bedding. Use a lamp with a wire cage to protect the bulb.

Dust your lights and outlets regularly. Dust build up on heat lamps and light bulbs the can start a fire.

Flammable substances (i.e. propane, gas, paints) should be kept away from the coop.

Another coop before and after a fire which destroyed the coop, several outbuildings and most of the flock. Here are some of the survivors: 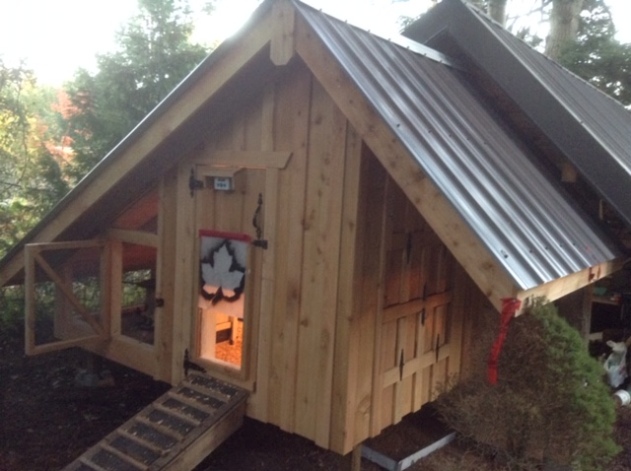