Chickens are somewhat paradoxical. Anyone who cleans up after their birds knows they have some gross habits: they poop in their water and on their food, in their nest boxes and sometimes, when sitting on the roost bars, even on each other. The one thing you may notice about your flock is they are constantly cleaning themselves. What they lack in good housekeeping they make up for in personal grooming. If you’ve got small chicks in the brooder you’ll see that some behaviours like dust bathing and preening are instinctual.

They accomplish that with the aid of their uropygial gland (preen gland) located at the base of their tail on their lower back, just in front of the tail feathers. For a bit of fun, I posted a photo of a preening gland on my Facebook Bitchin’ Chickens page and asked followers if they could give both proper and common names and explain what its function was. Many had no idea what they were looking at. I have to admit, that when you first come across one you could be confused into thinking it was an abnormal growth or a tick. Indeed, I see lots of “what’s wrong with my chicken” FB posts related to the preening gland.

Grab a coffee and have a seat to watch your flock in action. A bird will often run their beak along the length of each feather in order to put them back into place. They might bite feathers in an attempt to kill external parasites or to remove dirt and debris.

Preening includes reaching the head back to the tail, dipping the beak into the tail feathers, then coming forward and running the beak and head along the feathers. Then repeat. This is the part of the grooming routine that involves the preening gland, which secretes a thick, transparent oil consisting of extruded cells, ester waxes, fatty acids and fat. When the chicken rubs its beak or head against the gland, it’s able to pick up that oil and spread it over its feathers.

Sometimes things go wrong with the gland due to injury, disease or vitamin A deficiency, which can result in enlargement, impaction, rupture or infection. 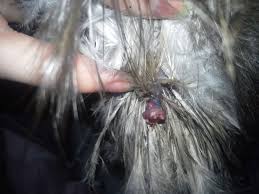 Note: I googled the audio pronunciation of uropygial and guess what? Three sites and I got three quite different ways to say it. I think I’ll stick with calling it a preening gland.