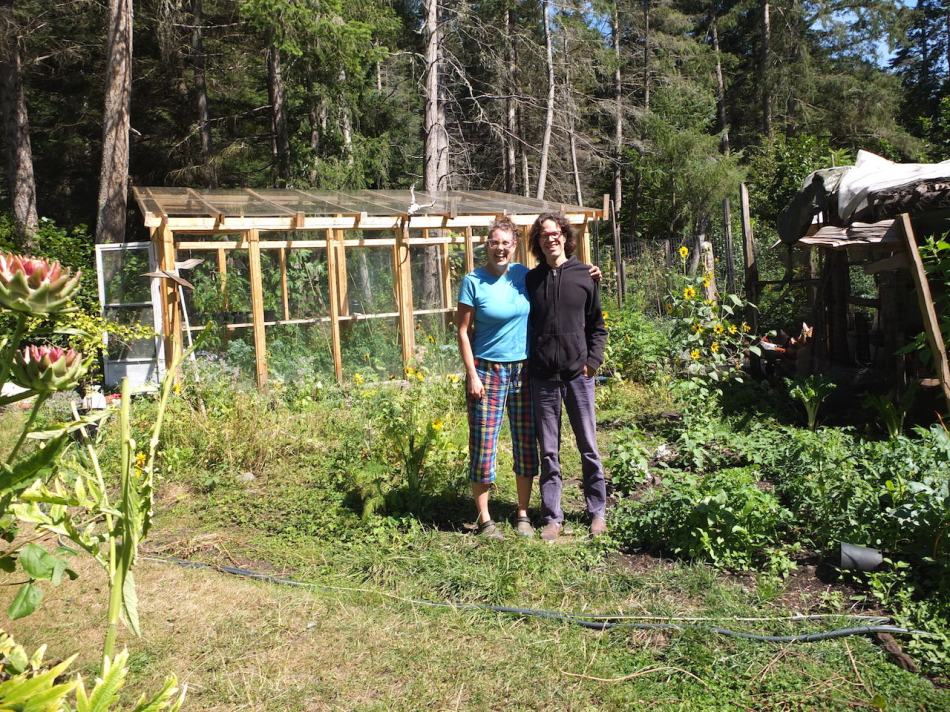 I live on a small island in the Salish Sea. Gabriola is often referred to the Isle of the Arts because apparently we have the highest per capita number of residents (in Canada) who are involved in the arts: painters, writers, potters, glass blowers and jewelry makers, just to name a few. I just sat down with two of them, Dinah and Trevor, to learn a little of their back story and find out more about their endeavours in homesteading. They are a multi-talented couple who can sing, play music, write poetry, do art, make felted hats, and when I say Trevor is a bit of a clown, I’m not being disparaging. He really is a circus arts performer and juggler to boot.

You’d think in a community of @4000 we’d all know each other, but that’s not so. We’re spread out over 58 square kilometres (22 square miles) and often move in different social circles or some like me, commute off island four days a week for work. Of course, I know who Dinah and Trevor are and have had a few interactions with them, but wanted to find out more about what drew them to this place and how they keep busy here.

Dinah grew up in central Alberta, spending lots of time on her Romanian-immigrant grandparents’ farm. They lived in a tiny place without many amenities called Tiger Lily, after the miniature wildflower of the same name that grew along the ditches at the roadside. Wikipedia refers to it as a destination for retirees and tourists – not unlike Gabriola, where the mean age is in the upper 60s.

They had a large working farm with beef cattle, chickens, pigs, gardens and fields of hay. She recalls having fun as a small child, but as she grew up there were greater expectations of her doing hard work. At just shy of 6’ tall, Dinah was well suited for throwing bales of hay.

Her mum was a potter and worked at a garden centre, while her Métis dad worked with his hands: first as a bricklayer, then in massage therapy. Her great-grandfather ran a mule team making deliveries to small communities in the northern part of the province.

Dinah relocated to Vancouver Island, living in her camper truck and traveling around to different communities. Those were the days pre-internet when the bulletin board was a real thing where folks posted lost & found items, rentals and jobs. By hanging out her wanted sign she found work at a garden centre and doing landscaping. When her truck broke down she found herself stranded in Nanaimo, only to learn it required a complete engine overhaul that would take months. She took the 20 minute ferry over to Gabriola and a scan of the local bulletin board resulted in finding a rental in a basement suite. Dinah recalls her landlords were artists who made funky furniture, complete with human-shaped feet and shoes at the base of the legs. By the time the truck was fixed she’d already set down roots here.

Trevor is from the east coast. He grew up in a rural Acadian village (pop. 1000) in Nova Scotia, where his family was involved in food production, fishing, baking and homesteading. He studied Chemistry at Dalhousie University and at 21 he headed to the west coast, spending several years on islands: Vancouver, Quadra, Denman and Lasqueti. He spent six years on the latter, an off-grid community with a foot passenger only ferry, drawn there by the arts scene. Trevor got into juggling and who’d have thought, but there was a thriving community of artists, jugglers and performers there.

Dinah’s dad taught her to play the guitar and she played the clarinet in high school. She taught herself to play the upright bass and in 2006, she was a founding member of The Kerplunks, a children’s entertainment band. They’ve won Canadian Folk Music, Western Music and Parents’ Choice Awards as well as been nominated for multiple Juno Awards (the Canadian equivalent of The Grammys). She also plays upright bass with the Contraband Swing Club at various festivals and events around Vancouver Island.

A decade ago, The Kerplunks were performing at the Vancouver Island Folk Festival. Trevor was also there: riding his unicycle, juggling and working as security. They got together and he ended up relocating to Gabriola.

As first time homebuyers they scooped up ¾ acre with a 400 square foot tiny house just in advance of another rising peak in the local house market six years ago. When a friend first came to visit they mistook the cabin for a chicken coop. Nope, the coop is housed in the trailer that was left on the property by the previous owners. Their intention was to build a coop, but so far it’s served its purpose.

Although they live in a subdivision of small lots  (½  – ¾ acre) their property is private and treed. The rustic cabin has been turned into a kitchen and living area, with a small loft accessible by ladder as Trevor’s office. He’s the coordinator of our local bus service: the Gabriola Environmentally Responsible Trans-Island Express (GERTIE). I’m a regular commuter and he’s been my driver on occasion.

When I enquired where they slept they showed me a 17’ canvas-walled yurt situated under the trees. I’m pushing 60, and enjoy creature comforts like my woodstove and toilet at night, so give them props for living outdoors year round. The only heat source is an electric oil heater, which necessitates the use of hot water bottles in winter. Getting up to pee in the night in a climate where it rains eight months of the year also means getting wet.

They’ve built a shed for The Kerplunks supplies and a greenhouse for growing produce. There were edible trees on the property and they’ve added more: apple, plum, cherry, fig, filbert and berries. One day they hope to build a small addition – not so they can move indoors, but to give Trevor a place to practice his craft: juggling, clowning and riding the unicycle. The yurt just doesn’t have the space or height for his requirements.

In addition to their performing, they have a felt making business, The Funky Bowler. They took a course from a friend and for the last eight years they’ve been making hats and custom fashions.

The couple also spends lots of their time growing, canning and preserving food. They’ve got eight ducks (crosses of Rouen, Runner and Appleyard) and of course, chickens – bantams, standards and even Old English Game that are more like super-bantams.

This year they ordered 300 Leghorn, Red Rock, Barred Rock, Cuckoo Marans, Ameraucana and Columbian Rock chicks from Rochester Hatchery in batches of 50 or 100 to raised for sale or to keep. They also hatched 40 of their own incubator chicks – Welsummers, Silkies and some fancy crosses. That outlay of cost and labour was not much of a money maker, but it allowed them to buy large numbers of chicks and to pick the ones they wanted to keep, essentially for free.

The chickens are housed in the old trailer with access to three runs which they are rotated through. They grow squash, tomatoes and kale and when the season is over the flock is allowed in the run, acting as rototillers in the garden beds.

Having chickens also often means having to contend with predators. They’ve dealt with rats and had losses due to aerial predators, mink and raccoons. Their drake lost an eye from a mink attack. A call duck was snatched by an eagle and, although it was dropped, it succumbed to its injuries the next day. Trevor caught a baby mink in a live trap. Luckily, for the young predator it was so small that it slipped between the bars, escaping, never to be seen again.

“Having chickens improves your life. They’re great at every stage: fantastic company, excellent composters and provide you with eggs and meat.” – Dinah

As you can imagine, Covid-19 has turned their lives upside down. All of Dinah’s music gigs, including performances in China, were cancelled. Same with Trevor’s performing and teaching. In order to keep busy they found a new creative outlet: the Fun Farm Family Power Hour, a one-hour weekly show streamed on Facebook. I scanned some of the 29 episodes that include information of bee keeping, food production, chickens, making preserves and felting. It’s a mix of DIY tips and homesteading tutorials peppered with music, quirky clown moves and juggling.

I think islands are interesting in that their physical isolation helps shape their own unique communities. It’s not always easy living on an island so you have to be committed to living here. Like many places of natural beauty and relatively low real estate prices our tranquil community is becoming more developed and the economic disparity between the residents more apparent.

There still are the folks who were born and raised here, older hippies who came as homesteaders in the 1970s and folks like me who migrated from cities for a quieter lifestyle.

Dinah and Trevor represent that group of islanders who are clearly not motivated by making money, but rather exploring their creative spirits and being as self-sufficient as possible. They exemplify those whose wants are few and footprint is small allowing them to live simply and happily with what they’ve got. We need more folks like them in a world bent on the pursuit of stuff.