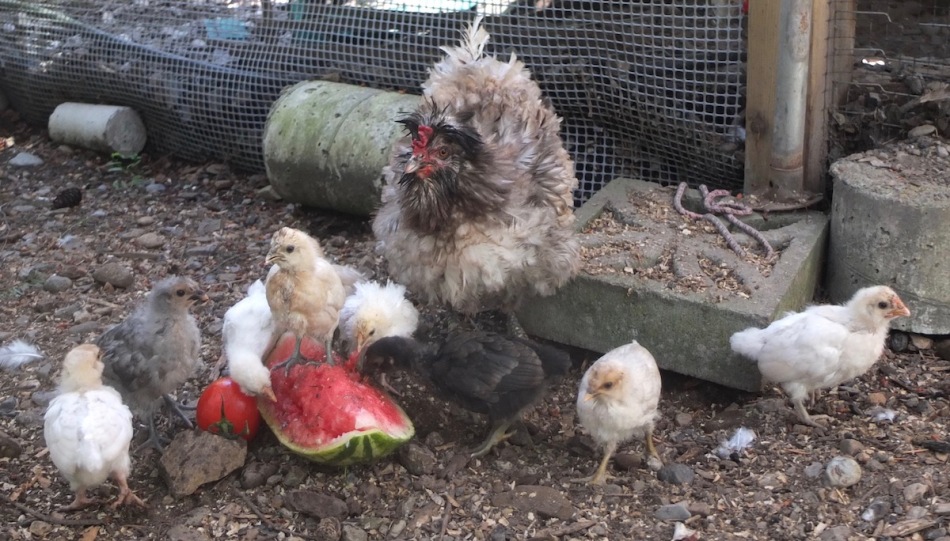 I had my first flock – free-ranging Dorkings, Welsummers and Easter Egger hens -for a couple of years. Only one of them went broody once: she hid on a stash of eggs in the woods, which she abandoned after less than a week.

I got my first taste of real broodiness when my Buff Orpington from my next flock went broody. I tried to break her since I didn’t have a rooster, but her resolve was stronger than mine. After almost three weeks of sitting on non-existent eggs and ice packs I gave in and slipped a dozen fertilized eggs I got from several friends under her. Twenty-one days later she was happy as a clam with a clutch of fuzz balls. She was my only hen in my little flock of four that ever went broody.

Fast-forward a decade: I have had many hens go broody and navigated through almost 70 hatches.

In 2018, I donated three dozen eggs to an elementary school hatching program. The chicks were returned to me when they were less than two weeks old. The school hatch coincided with one of my hen’s hatches, so my pen was overrun with littles. Three of them – two from the school and one of mine – were not only full sisters, but also frizzles. I kept Skye, and re-homed Coco and Nigella, much to my regret when I saw how beautiful they turned out. More than a year later, their owners were moving and offered to repatriate them to me.

Skye has never shown the slightest maternal instinct but her sisters have gone broody for a few days every month or so through each spring and summer. I would gently lift them off the nest daily and after a few days they’d give up, only to start over again the following month. One year I tried to give Nigella some eggs in another coop and she was having none of that. The disruption of moving her was enough to dissuade her.

Last fall, at the ripe old age of 3½ I put Coco and 13 eggs in a maternity coop and she sat diligently until she hatched nine, including two that required my assistance. I was so thrilled when she turned out to be a calm sitter and an attentive first-time mum. I spent lots of time watching her motor around the pen with her chicks in tow, scratching at the ground and calling them over for food.

I hadn’t had an issue with predators for about two years, so was surprised when a hawk squeezed between the overhead netting on my pen and killed Coco. Sadly, despite my remediations, it came back a few days later and killed one of her daughters. I worked hard after that to close as many small openings as I could which seems to have done the trick – albeit, a bit late for Coco.

Nigella stopped laying for awhile in late winter when she had a nasty case of vent gleet (the first I’ve dealt with). She spent ten days as a house chicken while I treated her daily. Once her yeast infection cleared up she made a full recovery and resumed laying.

She turned four a couple of months ago and par for the course, went broody yet again. This time she seemed more persistent. I would lift Nigella out of the nest box each morning and she’d make her way back to it. Then, each night I’d put her up on the roost bar, and because it was dark she would stay there but would return to the nest box once the sun was up. After almost a week of that I wondered if this time she was ready for what might be her last chance at motherhood. I put her in the broody coop with six eggs after dark and was relieved to see she was still sitting the next day.

I wasn’t planning on giving her eggs so hadn’t been collecting them. The next day I slipped another half dozen hoping they’d all hatch around the same time. Even eggs that had been set on the same day may hatch several days apart.

Some broody hens get up once a day to snarf down a fast snack and some water and usually deposit a German Shepherd sized poop. Not Coco and Nigella. They sat for days without seeming to get up. Finally on the fifth day some food was missing and there was a giant splat of diarrhea on the coop floor. That pattern was repeated for the next two weeks.

Significant weight loss is a concern as is dealing with external parasites without access to a dust bath. I’ve tried setting up a plastic bin with ashes or sand and it never gets touched. I made sure to treat Nigella with Ivermectin topically so she (and the chicks) wouldn’t have to deal with mites or lice.

I’m pretty hands off with my broody hens. I ensure they have fresh water and food daily, but otherwise don’t bother them. I don’t candle their eggs, willing to take my chances with what hatches or not.

On the afternoon of day 21, I went out to coop and found Nigella had kicked a dead chick out of the nest. I gently lifted her off the nest and counted two chicks and what I thought were 10 eggs, leading me to think it might have been a twin. I wouldn’t have knowingly given her a double yolked egg given the odds of it surviving till hatch. Even then, twins usually require assistance to get out of the egg as there is not enough room for both of them to zip (turn around inside the egg) and pip (break out).

When I checked back later I realized that what I thought were 10 eggs were actually 9 and the broken shell of another… so, not a twin. When I picked up the chick it was still curled up in a fetal position with no shell in sight, so I know that it hadn’t made it out of the egg on its own. I wondered if Nigella had ‘helped’ it hatch, accidentally killing it in the process.

Over the next few hours two more chicks hatched and then, another two during the night. I try to plan hatching days when I’m off work, but unfortunately the timing didn’t work so I had to hope for the best.

By the evening of day 22 (or only day 21 for the second bunch of eggs), most of them had hatched. There were two lone eggs she was still diligently sitting on. No luck by the next morning and when I got home that evening she’d called her chicks off the nest and abandoned those eggs.

I‘m always curious as to why some eggs don’t hatch, so I crack them open and do an ‘eggtopsy’ to see if I can see what went wrong. Sometimes the answer is as simple as they weren’t fertilized or sadly, that the chick was fully developed but died before hatch. It’s never pleasant, but it’s a good learning experience. I cracked both of them open and was relieved to find that they either weren’t fertilized or were early quitters with no visible embryo. They did stink from being cooked under Nigella for three weeks at 38C/100F.

Ordinarily I would open the coop door when the chicks were a few days old and let them into their own 15’x30’ fenced pen adjacent to my main flock. I was concerned that the chicks might have issues navigating the ramp and get separated from their mum. The weather had been unseasonably cool and rainy which didn’t bode well for littles that still couldn’t regulate their body temperature. I opted to be cautious and keep them contained in their 4’x4’ coop till they were almost two weeks old. I’d rather be safe than sorry and being gone from home 10 hours a day meant I wouldn’t be able to check on them during the week.

Nigella seemed quite content every time I visited. I scooped poop, added new bedding, water and food. She had an annoying habit of tossing the shavings into the waterer and scratching all the chick crumbles out of the bowl within minutes. I once had a five-week cockerel die in a freak accident when a ceramic food bowl flipped over, suffocating him. I’ve tried using stainless steel dishes and found chicks under them too. I opted for a heavy dog bowl, hoping Nigella wouldn’t find a way to tip it over and placed it on a raised wooden platform to keep the water clear.

When the chicks were 10-12 days old there was a break in the weather. I opened the coop door and was surprised to see Nigella was hesitant to taste some freedom. I tried coaxing her out by placing food on the platform at the top of the ramp, but she was still cautious. I stood waiting and finally gave up. When I returned ten minutes later, she was on the ground with six chicks and three others were squawking in the coop. I pushed two out the door and netted the third so they were all reunited.

The chicks are now four weeks old: a little flock of Easter Eggers and one white frizzle. I find that hen-raised chicks are more well socialized and take their cues from their mother. In this case, Nigella has been very calm and has taught them to trust me, probably because I’m the purveyor of plenty of good snacks.

And if Coco is any indicator of their family genetics for maternal dedication, then Nigella won’t tire of her babies any time soon. Coco’s chicks were 10 weeks old when she died. Although they had all transitioned into the main coop together they still moved around as a family group. I’m happy that her sister has followed in her footsteps, turning out to be a stellar mother who’s raised healthy, happy offspring. The hard part for me will be letting any of them go off to their new homes.