I have a lot of broody hens and let them do their thing. I give them eggs, I don’t try to ‘break’ them and when they’ve got chicks I let them raise them till they are ready to let them go.

Last year, I had 17 broody hens (& a couple more that were sort of broody, but not really serious) that hatched 105 chicks. I donated hatching eggs to two elementary schools that gave 36 chicks back to me, as well as incubator hatching 9 chicks myself. Call me crazy. It was a ton of work between March-July – lots of shuffling broody hens around, managing territorial disputes, cleaning, feeding, watering. But at the end of the day, I’ve got some great looking birds that I’m hoping will start laying any day now.

This is the tale of my worst, or maybe just the most complicated, hatch.

Maddy decided to go broody at the end of July – the second time for her last season. She’s a reliable, experienced broody, but on day 6 she got up off the eggs. It was during a heat wave so maybe she was uncomfortable. Whatever the reason, when a broody is done, she is done. There is no coaxing them back. I had been inundated with broody hens all spring but had no others at the moment. If I had another I could have slipped the eggs under her. 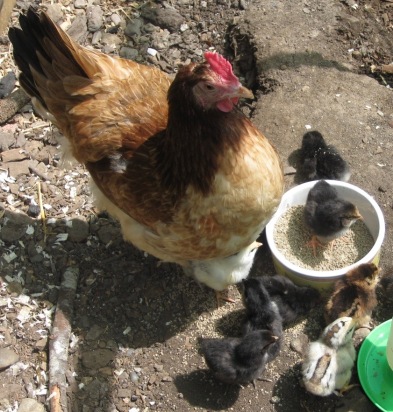 Maddy With Another Hatch

I have no idea how long the eggs had sat cooling. 12 hours? Maybe as long as 24? Good thing it was hot during the day, and warm at night. When eggs experience a drop in temperature, especially a sustained one, the embryo slows down their development, which can result in birth defects. It’s a chance you take if you continue to let them develop.

I posted on FB for the loan of an incubator and borrowed one a few hours later. Ideally you’d want to set up your incubator at least 24 hrs in advance of putting the eggs in, just to make sure your temperature and humidity levels are consistent. I have very little incubator experience and had no other option but to turn it on and put the eggs in.

The incubator was fine for a week, and then, on day 14 we lost power for 7 hrs. I was up at 4:30 am wrapping the incubator in blankets and then out to the coop to wrap the brooder that held Tracy’s newborn chicks. Luckily it wasn’t a long outage, but any disruption can mean disaster.

Then a miracle happened. On day 17 Mango decided to go broody again. My prayers were answered. I made sure she was serious about sitting and then put the eggs under her. Only 4 days to go till hatch day. She wouldn’t have to sit long to be rewarded with some fluff balls.

If you have chickens you know that they usually hatch @day 20-21. I knew that the periods they weren’t at the optimal temperature would slow down their development. So I was patient. Day 21 came and went, as did the next few days. Were the embryos all dead?

If so, I had a back up plan. As soon as Mango started sitting on those eggs I put 13 more into the incubator just in case they first ones weren’t viable. If they died, I’d take the new ones out of the incubator and give them to her.

I decided that I’d let Mango sit till @day 25; if there were no chicks by then, I’d give up on them. Luckily, two hatched on day 25 – long overdue, but robust. That evening, one pipped externally (broke a hole in the shell). It was still like that the next day. I monitored for a while and then decided to intervene. It may have gotten stuck to the membrane or too weak to continue but I decided to give it a fighting chance. Some people give up as this point in the belief it won’t hatch because it’s not strong enough to survive. I usually give everything the opportunity to live.

I picked up the egg and slowly removed a big portion of the eggshell, leaving the membrane intact. I saw that the blood vessels in the membrane had been absorbed so it was safe to pick away at the membrane as well. If blood vessels are visible it’s dangerous to remove it as a chick can bleed to death. 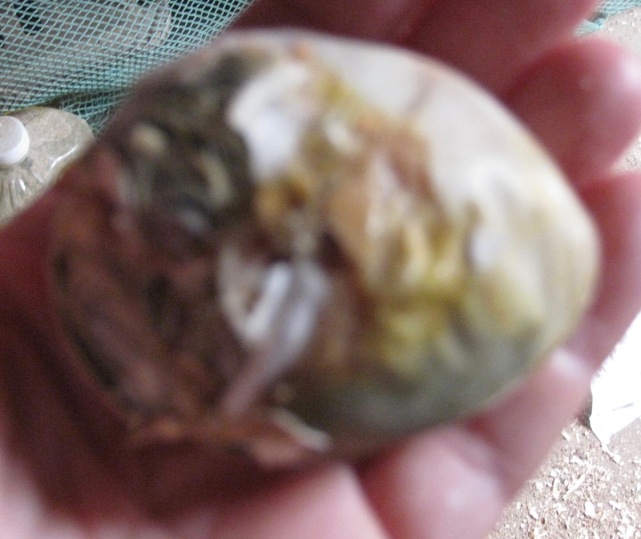 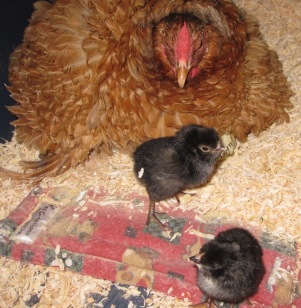 Mango with the first two chicks

I held the egg in my hand and carefully pulled the membrane away and finally the chick ‘hatched’ in my palm. I tucked it under Mango and a few hours later it was fluffy and moving around.

I cracked open the remaining eggs to do an ‘eggtopsy’ – to discover why they didn’t hatch. The most likely times embryos die are either in the first three, or last three, days of incubation. Of the six unhatched eggs: one was unfertilized, one was an early quitter (first few days), and sadly, four were fully developed and died in the shell at hatch time.

I really wanted the assisted chick to survive as it was the only one of the clutch that was Mango’s own egg. She was egg bound after her last hatch in May and although I was able to break and remove the egg, she was left with a distended vent. I think that impedes the ability for sperm to stay in her reproductive tract and fertilize eggs.

The chicks all appeared healthy, but one seemed to get cold easily and was slower than the others. While they motored around it cried for Mango to sit on it to keep it warm. I wasn’t too hopeful about its progress. It was growing, but not thriving. I didn’t want to remove it from its family as I think that was the best place for it. I had decided to try leaving it with Mango at night and put it in a brooder with a heat lamp during the day. The day I was going to do that – day 9 – but I found the chick had died overnight in the crate with its family. 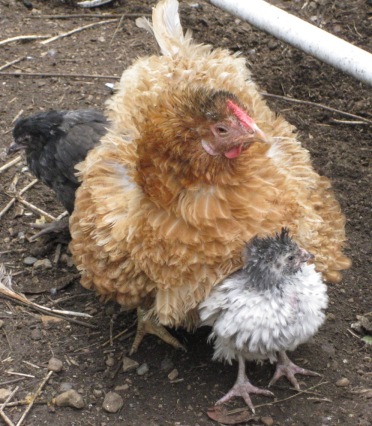 The other two have thrived. Both have the same dad: Simon, a Silver Spangled Appenzeller Spitzhauben x, the pullet’s mother is an Easter Egger (I hope she got the blue egg gene) and the cockerel is a frizzle, just like Mango. They’ve gone off to live with a family with kids – big Harry Potter fans – who have named them Hermione and Harry.

0 comments on “My Most Complicated Hatch Ever”