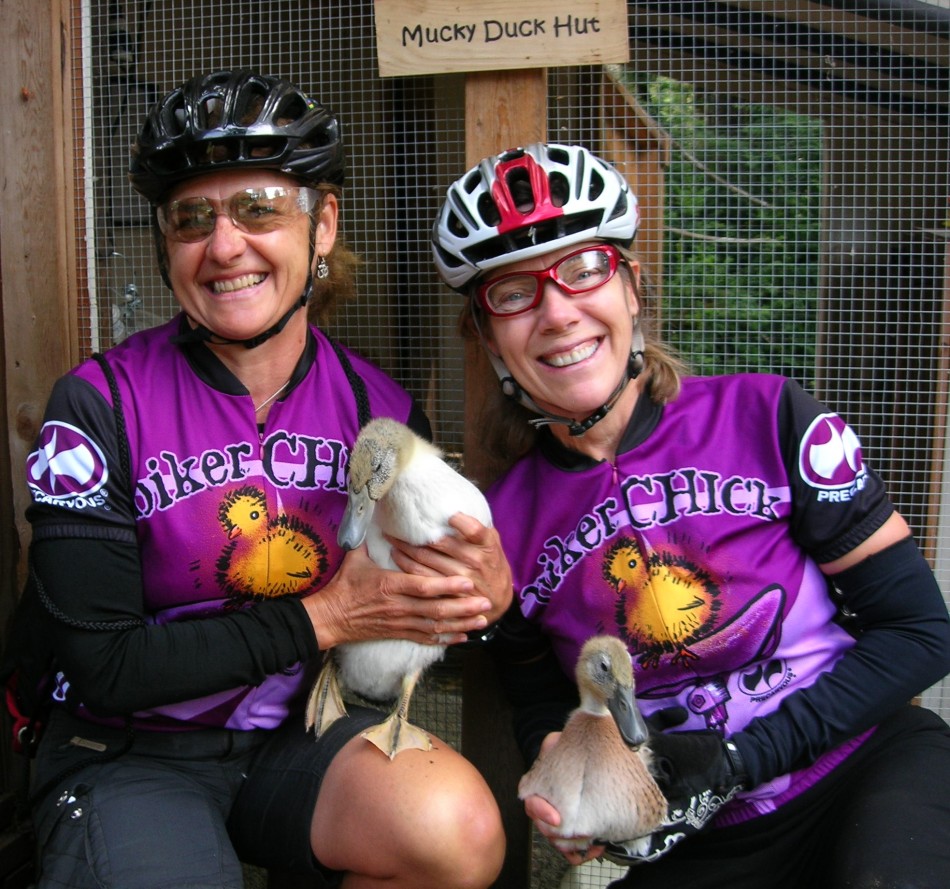 In 2013, Jean Wyenberg, had the idea of organizing a Gabriola Tour D’Coop: a self-guided tour of local chicken coops. I got involved as one of the ‘coopsters’: folks with chickens (or ducks) who wanted to share their hobby with others. 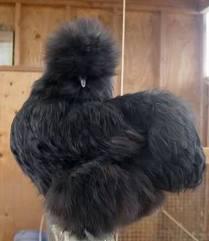 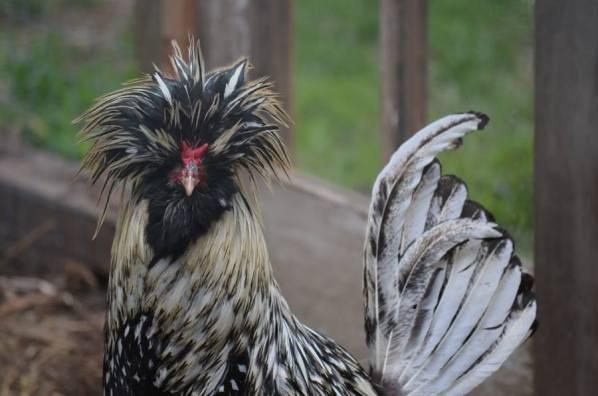 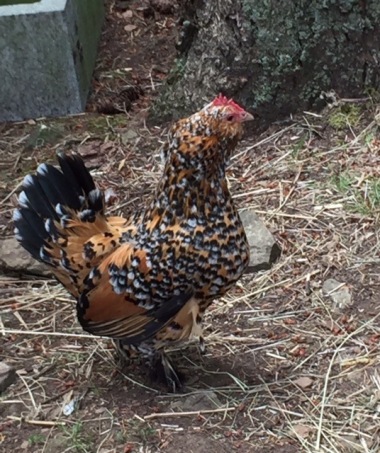 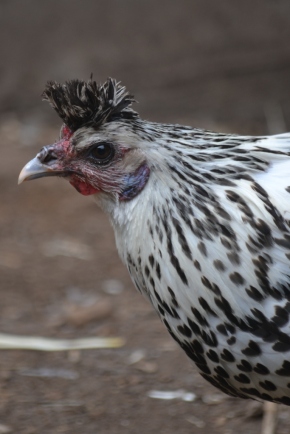 We had a fantastic tour map that was designed pro bono and the printing was sponsored by New Society Publishers. Participants were given the map and could go to as many, or as few, of the 12 coops as they wanted. Even on a small island, like Gabriola, it took most of the day to see all the sites, as they were clustered in different neighbourhoods. There were even two women who came over from Nanaimo, wearing Biker Chick t-shirts, who cycled through the whole tour. 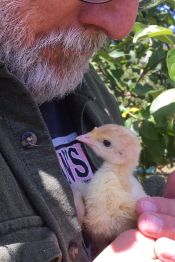 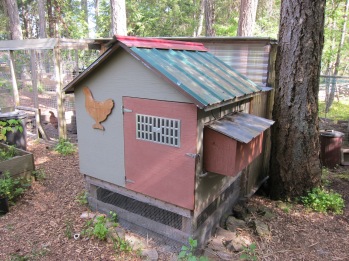 Every site was given a plywood chicken, which we decorated and placed at the end of our driveways, with numbers corresponding to the map. As you can imagine, it’s lots of work organizing and being on the tour. I’m sure most people like me, did a spring cleaning on their coop, tidied their gardens and cut their grass.

Besides being a fun day it was also a fundraiser. All of us had donation cans: visitors could donate whatever they wanted (or not) once, or at each coop they went to. As an incentive, each time a donation was made the person got a raffle entry. 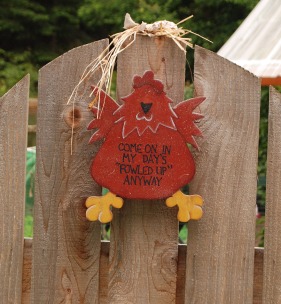 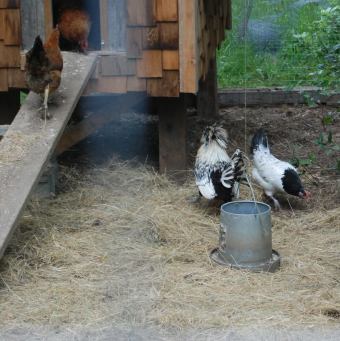 Visitors streamed through between 10am- 4pm, sometimes we had just a 5 minute break to run to the bathroom! We capped off the event with a big potluck at one of the sites, Paula’s 80 acre farm., where we emptied out all our donation cans. We managed to raise $1000 to buy chickens for a charity in Sierra Leone. 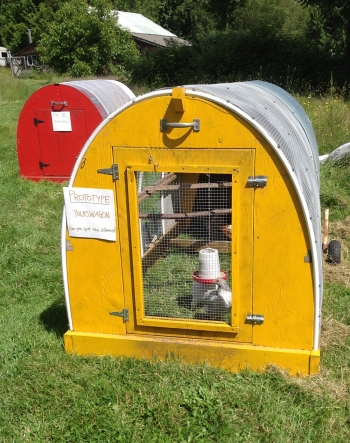 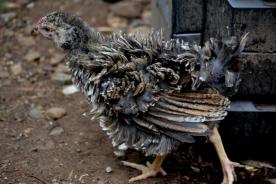 Diana Owen & I organized the 2015 Tour, again with 12 coops. We had a combination of veteran coopsters and new folks and added some features like a photo contest. Again, we all headed to Paula’s at the end of the day for our big potluck. Victoria Redhead Miller, the author of Pure Poultry, was our guest and one of the judges of the photo contest. Our fundraising effort went towards a health centre in Kenya.

Interest from chicken keepers waned the next year so we took a break, but Diana and I were back at it in 2016. This time we could only rustle up 8 coops. Even though we had fewer coops we had a big turnout of folks looking to get their chicken fix. I had @95 people come through in 6 hrs, which was a lot of talking chicken and standing on my feet all day. That year we raised close to $600 for The Gabriola Commons.

It was great to see the array of folks who came: people who used to have chickens and missed them, folks who wanted to get chickens and were looking for ideas and advice, people curious to see what their neighbours were up to, parents and grandparents bringing kids to see animals up close and personal. Some of us only had chickens, but others also had ducks, geese, turkeys, pigs, sheep, goats and donkeys, which were a big draw. 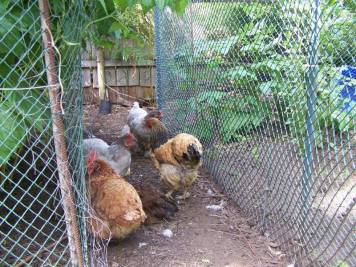 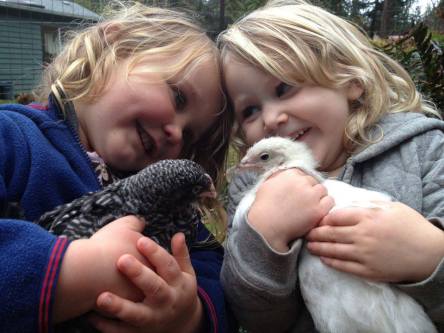 I don’t think we’ll be doing another Tour: the combination of the workload and increasing concerns around biosecurity (potentially tracking disease/parasites between sites) mean that fewer chicken keepers want to participate. Even though there isn’t an official tour there are still lots of folks like me that would be happy to talk chicken and show off my birds. If you want to drop by just ask and we can set up own Tour D’Coop. 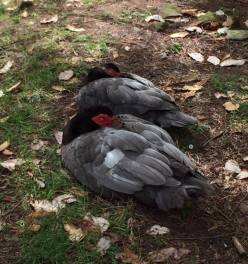 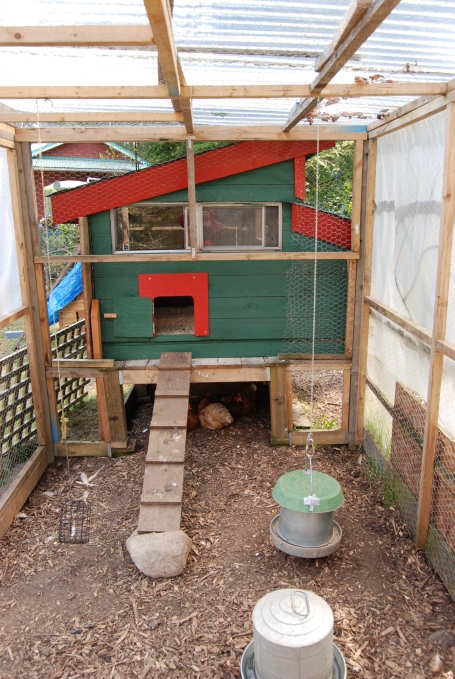