I met Gina almost three years ago, when I responded to her FB post offering to give one of her Red Rock hens to someone who was prepared to deal with her bumblefoot (read: Ella’s Bumblefoot). I had some experience so I offered to take Ivy and do the surgery. I’m happy to report that the excision was successful and she made a full recovery.

Several times since then Gina has purchased birds and hatching eggs from me. I dropped by her place last weekend to get an update. It felt like ‘old home week’ because all, but one, of her birds came from me. She’s got four very large Wyandotte x, a Silkie x Easter Egger who rarely lays, but when she does it’s a pretty pale blue egg, three Appenzeller Spitzhauben x chicks she hatched from my eggs in July, and a Red Rock hen going through a major molt. One of her Cochins died without warning recently but all her other birds are fine. There’s some cause for concern though, because she’s spotted a mink lurking around their property. 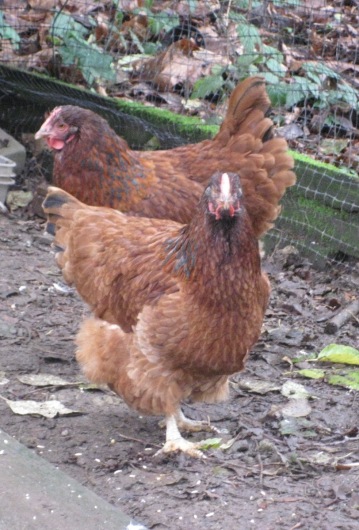 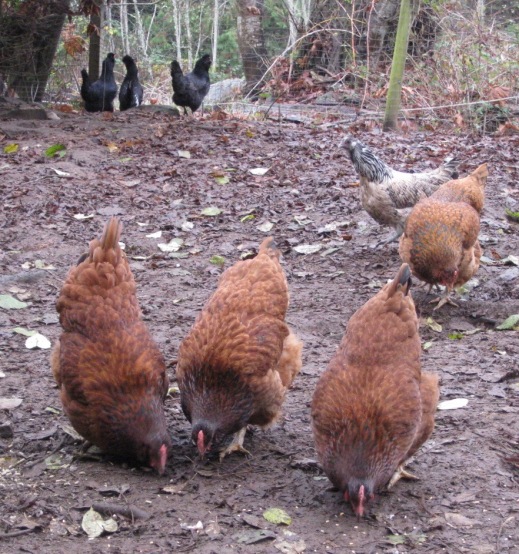 For the past 18 years she’s lived on a ½ acre lot, which backs on to a 7-acre parcel. She and husband, Andy, lease the field behind them for their two Morgan horses. Gina’s a long-time horse woman. When she moved to Gabriola in 1980, she was accompanied by a mare and her foal.

A self-professed hippy, she’s worked at a number of service industry jobs over the years, as well as running a therapeutic horse program and trail riding business. When she lived on Elgie Farm she had 150 laying hens, pigs, meat chickens and turkeys. She got into chickens when a friend gave her a flock of Silver Spangled Hamburgs and some heritage hens. He tried to talk her into taking his ostriches but they were a bit too scary for her.

Her favourite job was as an outrider and first aid attendant on a wagon train that went from New Westminster to Barkerville, camping along the way. You might recognize her now as your mail delivery person.

She’s sometimes accompanied on her postal route by her husband Andy. He does absentee home care and maintenance for non-resident property owners, small construction and renovation. If you’re wondering why he’s been sporting a neck brace neck brace recently it’s because he took a tumble off their deck, breaking his neck.

They both enjoy their mini-farm, their dog Lacey, a Jack Russell x Boston Terrier, and puttering on their property. 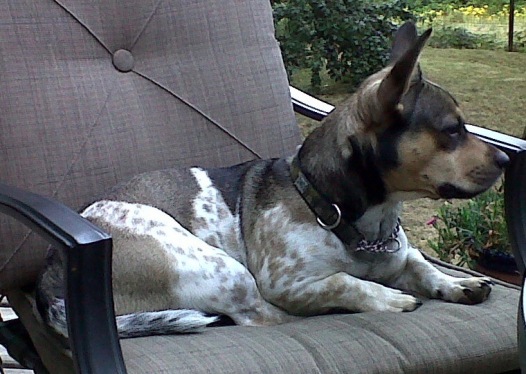