If you keep chickens long enough you’ll run into most parasites, injuries, illness and disease. I’ve only had to deal with one prolapsed vent, and there’s a reason they call it ‘blow out’. A vent usually becomes prolapsed when the hen has a problem passing a soft-shelled or very large egg and there is prolonged straining. The lower part of the oviduct turns inside out and protrudes through the vent (think of it like a hernia). It can be quite mild and easily remedied or severe and potentially life threatening.

This is a tale with both outcomes.

A friend, Savanna, sent me her story and some accompanying photos and video.

Her Barred rock hen, Funky, always laid medium sized eggs. When she was a year old, Savanna noticed she was standing upright and on closer inspection saw she had a dirty and prolapsed vent. She had been a regular layer from an early age, didn’t lay any large eggs and had access to proper feed and oyster shells. She wasn’t low on the pecking order so she was eating well. Funky was brought inside and cleaned in the sink.

Savanna googled to find a diagnosis and treatment plan: disinfect her vent, apply topical cortisone cream and Vaseline. Using gloves she pushed the prolapse back in and kept pressure on it. Funky was then kept inside the house in low light to prevent her from laying, but she laid an egg the next day without another prolapse. Savanna kept her inside for another 4 days. Funky continued to lay eggs normally so was reintroduced to the flock. She re-homed her three months later so doesn’t know if Funky ever had another prolapse. It’s not uncommon if she had. 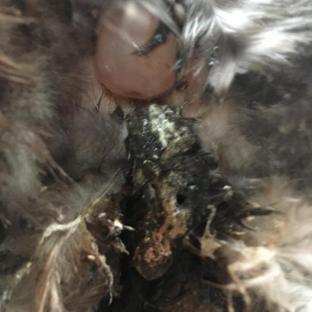 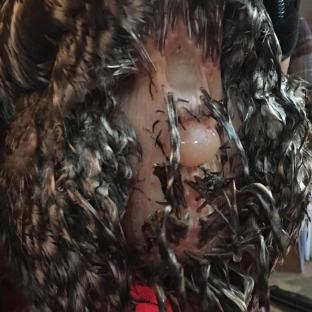 That was the happy ending we all hope for and is quite possible if the prolapse is not severe. I wasn’t as fortunate.

I responded to a post from a daycare that had bought 4 day old chicks, and now they were 4 weeks old, wanted to re-home them. (I could put in my two cents about treating animals as disposable entertainment for kids, but that’s another story). I ended up with two cockerels (re-homed to Thetis Island) and two Easter Egger pullets. One started laying at 6 months, but the other, Neko, not until she was 10 months old. I know, because I snooped in the coop daily to see who was laying or not.

Within two weeks, she developed a severe prolapse overnight. She had the classic penguin stance – upright body and waddling walk. I gave her a warm bath in Epsom salts, which helps to relax the patient before the procedure. I lubed up my finger and tried to push the prolapse in but it immediately popped out. I repeated this, held it, but it continued to pop out. I put Prep-H on her vent – it’s an astringent that helps to shrink the tissues. 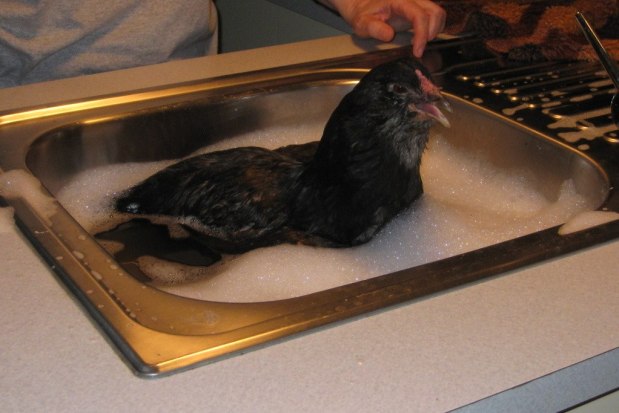 Neko In The Bath 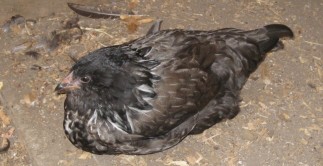 I repeated this routine every day after work for several days. I bathed her, cleaned her vent (poop just slides out), tried to push the prolapse back in and tried to shrink the tissues. All to no avail. It was apparent that Neko was in pain and beyond help and I made the sad decision to euthanize her. Luckily for me, my neighbour at the time, Tom, worked at a chicken farm and offered to humanely dispatch her.

I didn’t do a necropsy on her, but I’m wondering, because she was so late to start laying, and then immediately had issues if she had some problems with her reproductive system that contributed to her prolapsing.

Two stories, two outcomes, but we both tried our best.

FYI: I would advise not using Vaseline on a hen’s vent. It’s an oil product that sticks to the mucous membranes. If you need to do an internal exam use KY or some other water-based or silicone lube.

I’d also suggest, when doing procedures on birds, to swaddle them in a towel and cover their head. They become very docile and compliant and it’s easier to work on them, especially if you don’t have an assistant.

0 comments on “The Tale of Two Prolapsed Vents”