I’m fortunate to live on an island without a lot of predators: big (bear, fox, coyote, bobcat) or small (skunk, opossum, large snakes). We do have transient cougars, but the deer population is quite healthy so there’ve been no run-ins with farmers or pet owners.

We’re not without predators: there are eagles, hawks, owls, mink, marten and raccoons. Ravens can take eggs and birds and even kill piglets and lambs. Some people are plagued with successive waves of different predators. I have neighbours on all sides that have lost chickens to raccoons or mink.

I think raccoons have enough to eat from my open compost bin and we sometimes feed the ravens. They love oranges, so I cut them in segments and watch them carry them away. Yes, ravens are predators, but they also keep other aerial predators (e.g. hawks, crows) off their territory. They consider my property theirs, so in staking claim to my place they are also protecting my chickens.

So far, knock wood, I’ve been very lucky. In 9 years of keeping chickens I’ve had to deal with very few predators.

The neighbours’ dog grabbed a pullet, twice, but did no lasting damage. I’ve had one raccoon attack – in broad daylight. I managed to grab the injured hen back from the coon and she made a full recovery.

My only real predators have been hawks. I’ve had eight chickens killed and one injured over the years. Two hens were killed when my flock was free-ranging and the other attacks occurred when they were penned. I’ve seen Cooper’s and Sharp Shinned Hawks around, which seem to have the most success going after my bantams and young birds.

I’ve spent a lot of time and energy netting the top of my pens, but they are large (1200 sq. ft and 480 sq. ft) with trees and structures, making it difficult. Each pen has a 10’x20′ car canopy in it, with the netting placed overtop, allowing it to withstand the weight of a light snow.

Last March, when I went to lock up my birds this Barred Owl was sitting on the corner post of my pen. I ran back to the house to get my camera and it let me take some photos and was still there when I went back into the house for the night. 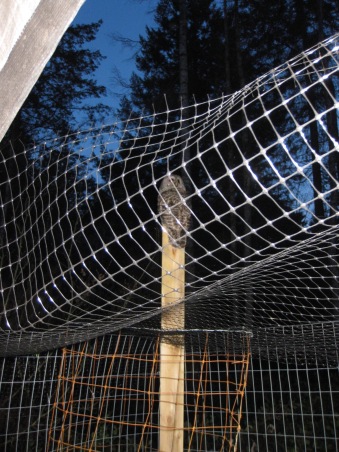 My pen is now pretty well covered – in fact, I had to pull the netting down to take these pictures. That owl was out hunting mice and rats and I have no fear it was after my birds.

If you’ve got an issue with mice or rats, please don’t use poison to kill them. They are often eaten by owls who, in turn, die a slow and painful death. I use snap traps, which are safe and effective when used properly. I put them down at night under a covered box and pick them up first thing in the morning so wild birds and other creatures don’t get into them.

I live on acreage in the country. It’s my job to secure my birds the best I can and to live in harmony with the wild animals that share my space.

0 comments on “Living With Predators”