When I pulled into Heather and Paul’s driveway on Gabriola Island it was a bit of a fiddle to find a parking spot. I thought they had a load of holiday visitors, but no, it turns out that they’ve got a large blended family.

Heather’s sons have fledged and flown the coop. Jethro got a 2 year UK work permit and has been doing a work-stay on a rural B & B in England for the last 8 months. And guess what? They’ve got chickens too. Min spent some time traveling through Latin America and is now living in the Lower Mainland.

They were almost on the verge of an empty nest and now it’s looking more like a full house. Can you say housing crisis? Good thing they’ve got 5 acres, a house and a cabin, which allows them to spread out a bit.

Both Paul and Heather work for New Society Publishers (NSP): he’s their IT Specialist and she manages their E-book Program. You might recognize her as our former Islands Trust representative, having chosen not to run for re-election after four years in office. She’s juggled those positions while also working as a library assistant at our local branch. 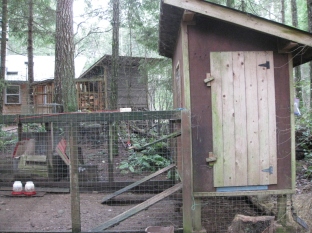 In addition to working and family life they’ve got a passel of animals: a dog, two cats and a flock of 16 chickens. Paul designed and built the coop and run seven years ago. Their current birds are more recent additions or descendants of their original chickens: Black Copper Marans, Ameraucana, Rhode Island Red, Welsummer and a bunch of barnyard mixes. 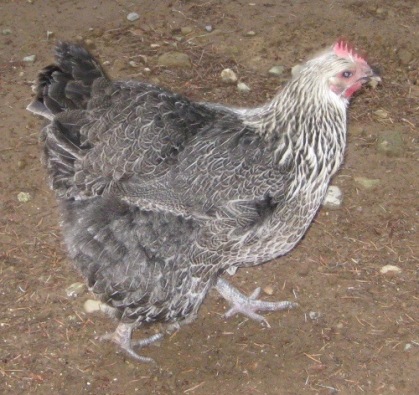 The chickens are more Heather’s thing, but they both love having them, for the eggs, but also for the entertainment. They also enjoy the connection their visiting grand-daughter has with the birds. She doesn’t seem to tire of them and it’s a good life lesson about our connection with where food comes from. 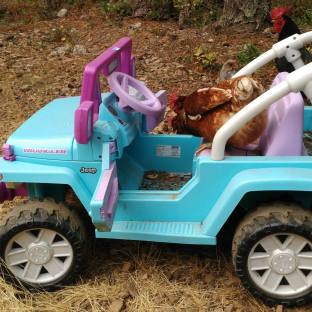 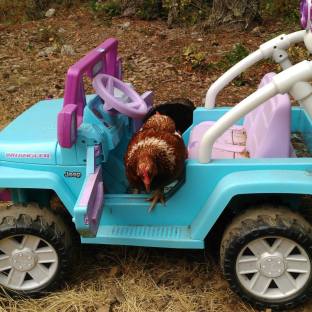 Heather and Paul are totally committed to free ranging their birds, weighing the risk of predators or sometimes losing eggs that get laid in the woods with the benefits of not confining them.

“For us it’s a quality of life issue. They are clearly much happier – in the mornings they can’t wait to get out of the run – and we believe that they’re healthier too. A truly free range hen has access to a much more diverse diet and the eggs she lays reflect that.” – Heather

They had a problem with ravens stealing eggs from the coop a few years ago. They’re smart birds who’ve learned how to get through the pen door and up the ramp into the coop. The ravens have moved on and the flock hasn’t been plagued with too many predators.

They’ve endured two raccoon attacks: one bird was so badly injured she had to be euthanized, but another emerged from the jaws of death unscathed.

Last month, Heather and Paul were awoken by shrieks in the night and had to run out into the darkness to save their birds. Heather opened the coop door and saw a mink – like a vampire – sucking blood from the neck of a dead hen. It dropped the hen only to hiss at her and make a hasty retreat for the woods. If you’ve ever had a mink attack you know that this scenario could have been much worse. They can easily wipe out a flock of 30 or 40 birds in one fell swoop. They are fortifying the pen to avert another encounter.

Over the years, I’ve chatted with Heather about chickens and got hatching eggs from her to diversify my flock. Like most chicken keepers she loves to talk ‘chicken’ so I’m sure I’ll have updates about their predator situation and how their latest birds are faring.