December 21st: the darkest day of the year, Solstice, a full moon, the start of my holidays and day 2 of a power outage that would stretch on for almost 6 days.

What started as a windy day turned into the worst storm in decades. I’ve lived through many power outages, most with power returned within a day or two. This one turned out to be different. I’ll remember the widespread devastation and perhaps in years to come think of it as The Climate Change Christmas, or The Storm That Stole Christmas or even The Christmas That Wasn’t.

I went in to Nanaimo early on the 20th, got all my grocery shopping done and stockpiled chicken feed. I’d heard the wind warning and knew that all the major ferry routes had been cancelled but my trip home to Gabriola Island– on one of the shorter crossings – was without incident.

On my drive home I saw lots of branches down and evidence of some big trees that had come across the road, but had already been cleared to one side. Folks were out with chainsaws and axes harvesting free firewood. I was a bit nervous about falling branches but made it home unscathed.

That’s when I found we had no power. I live in a rural area, subject to the elements so I’m used to the occasional outage, usually lasting only a few hours to maybe a day or two. In 18 years, the longest I’ve had to endure is 42 hours.

Since there was nothing to do inside I decided to go clean the coops and get a head start on my holiday weekend. The birds were quite nervous as the wind was howling and there were lots of branches around their pen. Several worn bungee cords holding the tarp on the car canopy over their coop had snapped and the tarp was billowing in the wind. I secured everything and it was awhile before the chickens were calm enough to eat the treats I’d brought from one of the food recovery programs.

The wind was gaining traction. Branches were continuing to fall and then a big tree in the woods behind the house came crashing down. My place is surrounded by huge fir trees that could do major damage if they fell. I decided I’d be safer in the house. Since outages rarely last long and the power went down before lunch I figured we’d have electricity back up by dinner, or surely by bedtime.

It wasn’t until the next day when I drove around that I realized how severe the storm was. When you’re cut off from reports you can only imagine what’s going on outside your property. There were dozens of trees down, crossing the road, some cleared to one side, some still obstructing traffic, hydro/telephone/cable lines hanging. I heard there’d been a house fire the night before – it was totally gutted. I saw a tree on a car, on fences, on houses. Clearly this was the big one. 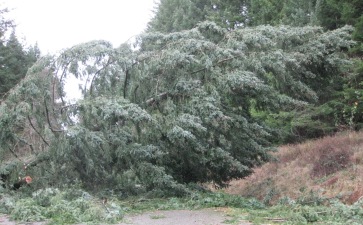 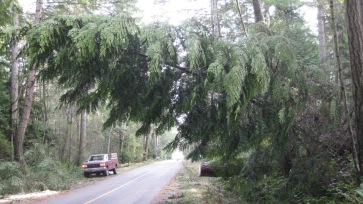 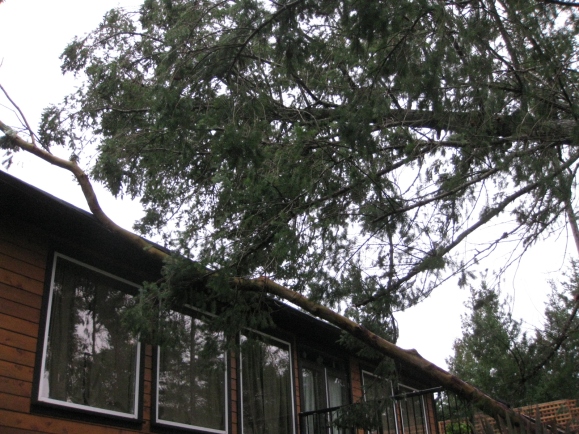 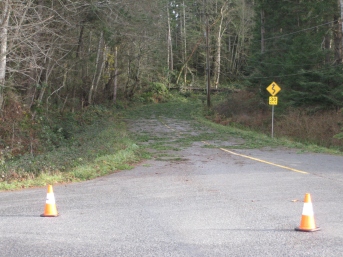 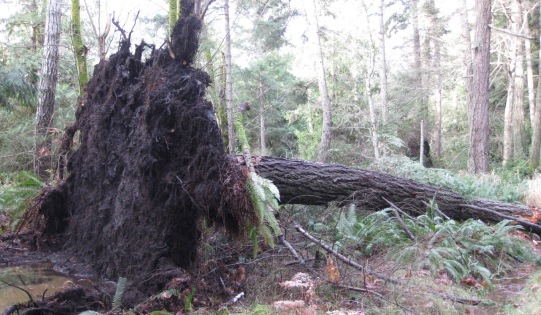 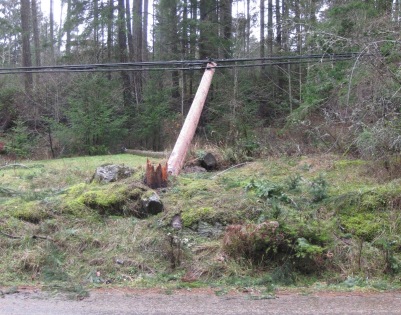 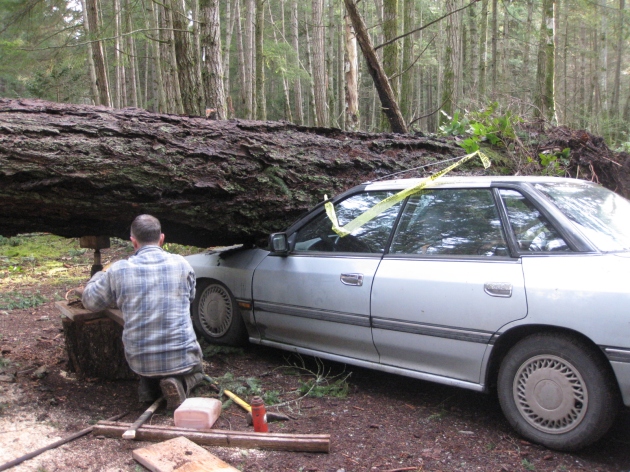 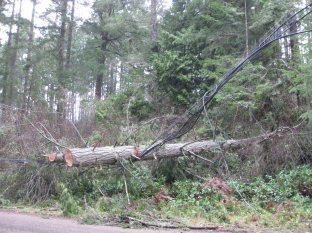 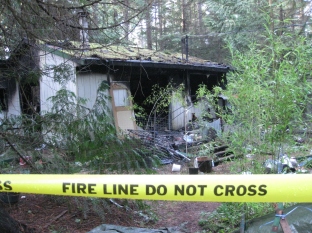 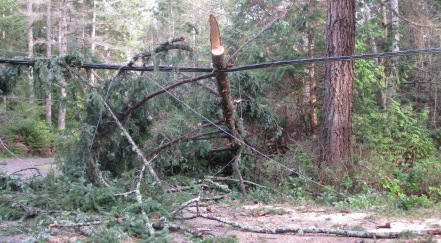 South Rd
The first day of the outage coincided with what was supposed to be the start of 18 days of a restful vacation. When your world is thrown upside down its far from restful. Life gets scaled back to the basics: boiling water for dishes and bathing, cooking on a propane stove (no oven), trying not to open the fridge or freezer. No showers, no laundry, no running water, no television or computer.

We have battery operated lights and a radio, but they need recharging to work. A warming and recharging centre was set up at the local seniors’ centre – I dropped by on days 4 and 5 to charge my devices and chat with some folks doing the same.

On day 2 the phone line went dead, but came back on day 4, without explanation.

On days 2 and 3 we heard that hydro was on the island to assess the extent of the damage: 18 power poles needed replacing, a number of transformers were shot, trees needed removing from the lines as well as the roads, wires fixed.

On day 4 the hydro truck, tree fallers, flagging staff were out in full force. They worked 16 hr shifts to get the power back up.

By then we’d lost everything in the freezer part of our fridge and some of the food in the fridge. We salvaged some food by storing it outside or in an unheated storage area. The upright freezer was still holding on and we managed to move some of our meat to my sister’s, thanks to her generator.

Until you are deprived of the things you take for granted it’s hard to gauge how much we rely on them: electricity isn’t just lights, it’s appliances, electronics, for some, heating, and for all of us in a rural area with our own wells and septic fields, the ability to have running water and flush our toilets. We’ve got water in the ground or in cisterns, but getting it into the house requires electricity for our pumps.

This time of year is dark. I live in a 1940s 1 1/2 story, log house that is hunkered down in a clearing in the forest. Our log house was built by homesteaders who used the materials at hand. Our single pane windows have been replaced with thermal ones, but they are still relatively small. I’m surrounded by tall trees. Ordinarily I wouldn’t notice because the house would be well lit. With only @8hrs of daylight the nights felt really long.

My partner bought a tree and decorated the house for the holidays. I’m glad to have had the opportunity to enjoy the festive atmosphere for a couple of weeks before all our lights went dark. 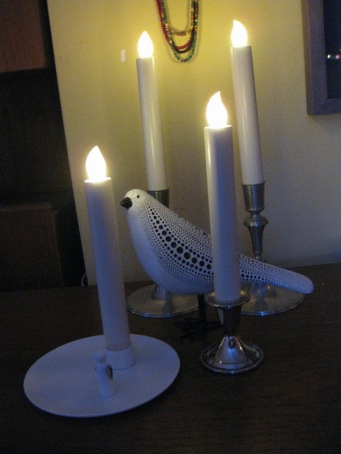 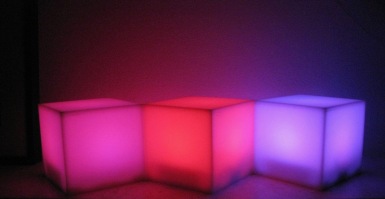 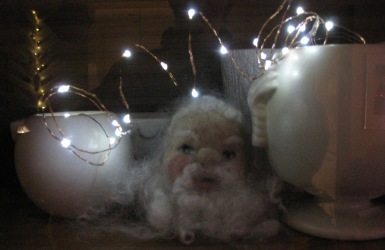 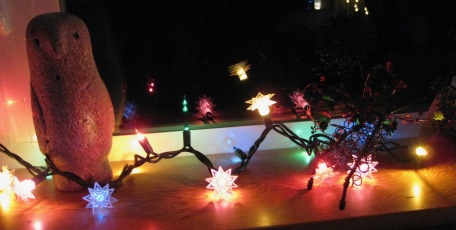 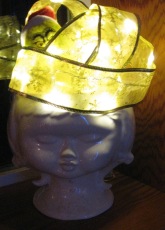 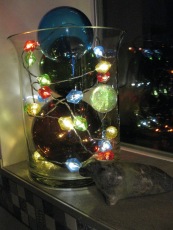 I may live in a rural area but I am completely dependent – psychologically, if not physically – on modern amenities: running water, lights, television, computer, laundry, showers.

We’re well prepared in that we have a wood stove, good supply of firewood and a propane stove (we can use the top burners but not the oven), but much of the day is taken up with the tedious tasks that ordinarily I wouldn’t think twice about. Boiling water to wash with, wash the dishes with. Preparing food that doesn’t require using an oven or opening the fridge too often. Filling buckets of water from the cistern to use for dishes or flushing the toilet.

Going to the ‘village’ was mayhem. People were preparing like it was the apocalypse. I lined up for 25 minutes to get gas for my car.  Our fuel only gets delivered to the service station once a week and it looked like the way folks were hoarding it that we might run out before the next delivery. The stores were sold out of propane canisters for my Coleman lantern, the water machine was down, some of the retail businesses, lacking a generator or conserving their fuel for refrigerators or freezers were closed. No one was taking credit or debit cards – cash only, cheque if you were lucky. Of course our only bank machine was down.

Our only grocery store was a mess- after 48 hrs with no power (generator only) they cleared all their fridges and freezers and everything went in the dumpster. It was such a shame to see thousands of dollars worth of stock going to the landfill. Most people, like me, don’t have a generator so we couldn’t take anything home. 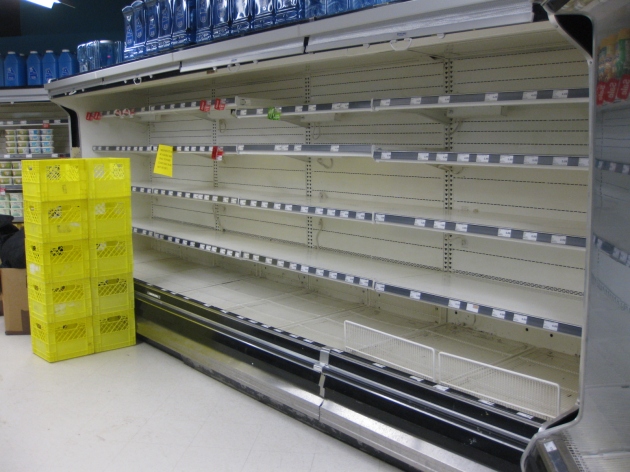 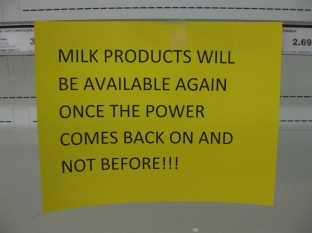 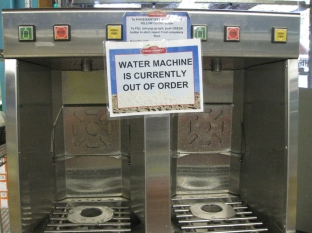 Water Machine: Out Of Order

By day 4 some areas starting to get their power back. A transformer blew and some of them lost it again. Our holiday guests decided to postpone their visit and it seemed like Christmas might be quite gloomy.

We decided to attend the annual Spirit Feast – a dinner open to the whole community. The venue didn’t have power so the event – a scaled back affair – was held at a Church that had electricity. Instead of the full turkey meal with all the fixings, we had warm turkey sandwiches and were most grateful for the meal and the company. 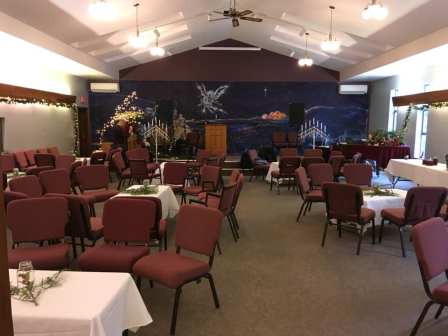 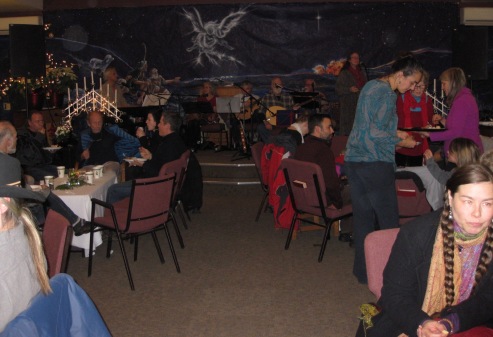 Our power came back late afternoon on the 25th. Cable and internet just resumed – more than 24 hrs later.

The latest reports indicate that over 700,000 customers lost power, mostly in the Fraser Valley area, east of Vancouver, Vancouver Island and the Gulf Islands. Hurricane force winds reached over 120 kms/hr. There are fewer than 6500 homes still waiting to get their services restored. For them it may be a few more days. Most of my island has power, but there are some unlucky folks still in the dark.

I’m glad to be on the other side of that experience. We survived, neighbours helped each other, we didn’t get too cranky. I was challenged to let some things that were out of my control go. I enjoyed playing cards by lantern every night. I benefitted by going to bed early and without to-do lists to think of I got good, long nights’ sleep. I missed the internet and my connection to the outside world. I’m glad it’s over and hope for a less eventful Christmas next year.

Update: With any power outage it’s never really over till it’s over. As soon as the power comes back on you instinctively want to use everything, but you don’t to prevent burdening the system. Of course, you flush the toilet, do some dishes and clean up a bit as the power could go back down any time.

On day 8, Dec 28th we lost power for 45 minutes in the morning. It turns out the crew was working on the lines and it was only temporary. When you don’t know what’s going on a little panic starts to set in.

At 4:50pm, just as I was preparing dinner, we were plunged into darkness – again! I called around and found someone who still had power to check Facebook and the Hydro website for updates. The crew had just left the island, having restored power to the whole island, when a transformer blew, leaving half of us without power. They literally had to turn around and come back. Power restored 7:20pm. Whew … after enduring what we have I don’t know how we’d fare with another extended outage.

On Day 12 (Dec 31st) the last customers (Salt Spring Island) had their power restored! They are now reporting this was the worst storm in Hydro BC’s history, affecting over 725,000 customers. No word yet on what the final cost of clean up, insurance claims and power restoration.

People have asked how my chickens fared. The first day when the winds were howling was rough. Big branches came down close to their pen and coop but caused no damage. Bungee cords snapped and the tarp covering the canopy frame billowed in the wind, scaring them, but I secured it fairly quickly. After the winds subsided they were fine. One of the teenaged pullets laid her first egg on Dec 22nd.

13 comments on “The Storm That Stole Christmas”