When people find out I live on Gabriola, they ask if I know their friend or relative. It’s a myth that if you live in a small community you know everyone. Case in point: even though Nadine and I commuted on the same early ferry for seven years we never really talked – we sat with different friends in the same lounge. I knew her by sight, but didn’t know anything about her except that she was an actor in our community theatre group The Gabriola Players. I finally met up with her in 2016 when she bought a bantam Cochin hen and five standard chicks she had hatched. I visited their place when her husband, Derek, was just finishing up a new coop. The hen and chicks were housed there, in an adjacent pen to the main flock, until they were ready to integrate into the main flock.

Last summer, she picked up 15 straight run chicks from me and I’d hear some updates when I’d run into her from time to time. A couple of weeks ago, I dropped by their place to find out more about them, and their birds.

Nadine grew up on Vancouver Island to homesteading parents, who raised both chickens and rabbits for meat. They gave up farming after moving to Vancouver when she was a teenager. Fast forward a few years, Nadine’s mother and step-father had recently moved to Gabriola and offered to take care of granddaughter Ellie when Nadine went back to work after a maternity leave. Childcare is a scarce commodity so she jumped at the chance for some family support. She worked in town as a bookkeeper and did the daily commute for seven years.

After the birth of third child, Ethan, now two, she found a job working closer to home. She is the bookkeeper, admin and support person for People For A Healthy Community (PHC). She’s also the minute taker for the Islands Trust. What she may have lost in income has been made up for in an increased quality of life, a short commute and flexibility around juggling kids’ schedules. Ethan is in daycare, Ellie attends grade 4 at the elementary school directly across the street from her office and eldest, Brandon, almost 19, is attending his first year in the Criminology program at Vancouver Island University.

Three and a half years ago Nadine and Derek bought a large house on five acres. When they took occupancy he was working in northern British Columbia as a journeyman electrician, so Nadine had to move their household and two kids without him. By the time he came back home, the boxes were unpacked and they were the new owners of a flock of chickens. The house came with a coop so three days after the move Nadine got four hens, a rooster and four young pullets from Brenda. When I asked what breed they were she replied: “They were black, grey and blue, if that helps”. I had to laugh because that could be just about anything. Clearly not all chicken keepers are into knowing everything about their chickens.

“They grew old and were replaced with younger birds, a couple of them were great mamas.  One was named Miss Muffet and on cull day she ran away and never looked back, she was one smart bird.  I like to think she is out there somewhere eating bugs and laughing maniacally at us.  She was crazy like that.  We kept the rooster, named Rascal. He was lovely and more like a hen really –  the first to run and hide at any sign of danger.  He was replaced with our current rooster – it was a hard decision – the new rooster is so pretty he won.” – Nadine

Her mum, an experienced chicken keeper, has been around to provide them with advice. They love their fresh eggs and the kids like interacting with them.

Nadine and Derek are passionate about growing their own food and gardening. They name all their birds, but they don’t get too attached as the spare cockerels will become dinner at some point. They want to teach their kids to treat their animals well, understanding where their food comes from.

Like Nadine, Derek has also found work closer to home. He’s put working as an electrician on hold and has been doing house building for a local company. His end goal is to be self-employed as an electrician here on island. Until then, he’s gaining more construction experience and doesn’t have to work away from the family.

I was a tad envious of how many outbuildings are on the property. I asked Derek, who came here to attend Island School of Building Arts’ timber frame course, if he built them. No, most of the structures were all there when they moved in: a chicken coop and run, a small open horse barn, massive woodsheds and storage buildings. Derek and a friend built the new, larger chicken coop and he built the kids a tree house. 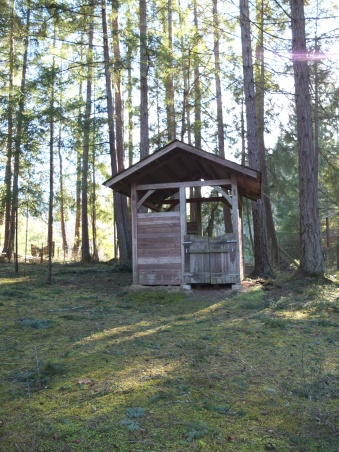 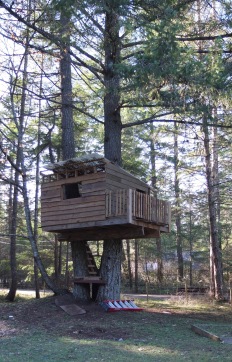 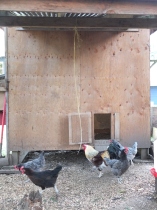 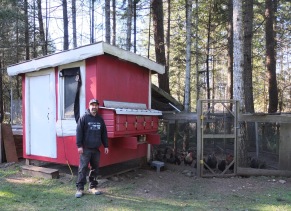 The Coop That Derek Built

I was also a bit in awe of how tidy everything was. Most of us who have space fill it and there always seems to be an overflow of things that might come in handy ‘one day’. Everything at their place was in its place: the firewood was stacked perfectly, there were no piles of ‘stuff’. When I commented on it, Nadine gave Derek full credit.

When we went into the house she prefaced it by saying “welcome to the mess”, and not surprisingly it was tidy as well. I’m totally impressed that folks who have three kids, two dogs, a cat, fish, a gerbil and a flock of chickens can keep their place so orderly. And if that wasn’t enough, in 2017 they boarded a friend’s Quarter horse, Blue, for six months. 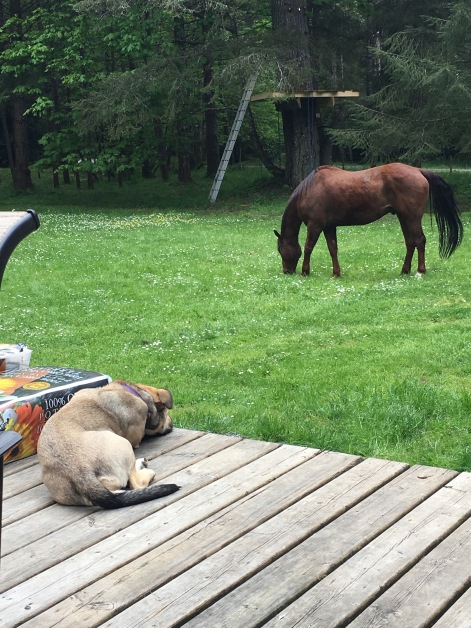 As we chatted, I got a brief history of some of their birds. The bantam hen died in the nest box, cause unknown. Her five daughters are still with them and doing well. Added to the mix are five other hens and two roosters (one Wyandotte x and one Cuckoo Marans x) – they only want one so will be keeping the one they refer to as ‘pretty’. 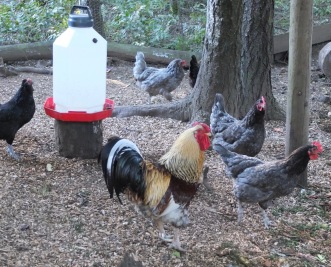 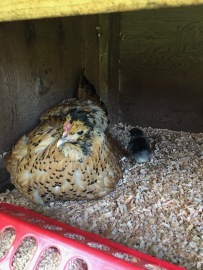 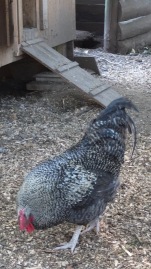 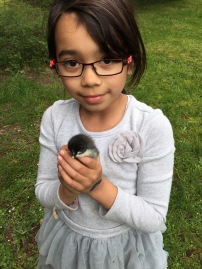 Apparently my birds got their seal of approval: Nadine says: “I like them, they make beautiful eggs and the birds have some brains.” Not a bad combination and something that I have been breeding for – calm, beautiful birds that lay beautiful eggs.

They lost four recently, in rapid succession, to what were probably raccoons. They’ve amped up security with the overhead netting and have a dog that patrols the grounds. She’s a good guardian dog, except she also likes to chase chickens. The compromise is to allow her to do security and keep the birds penned. The smaller coop isn’t currently in use: it’s housed broody hens and chicks in the past and will soon be transformed into a larger structure for meat birds.

The family has divvied up the chores: Derek is responsible for the constructions and topping up feeders and waterers; Nadine is there with the design ideas and acts as ‘mother hen’; Brandon cleans the coop; Ellie loves the chicks; and little Ethan, is happy to toss chicken scratch and watch them come running.

I wondered how the kids got along in light of the age gaps between them. Nadine has a theory that no matter who you live with they’ll annoy you, at some point. Like any siblings, they vie for attention, but there’s enough of an age difference that the older ones can help with, and teach, the younger ones. One thing’s for sure, they all love their chickens.