I let my chickens out during the week and my partner, Jan, does it on my days off. This morning she had bad news: she’d found a dead hen by the gate. I went out, searched everywhere and couldn’t see anything.

My pen is wired on three sides and the fourth side – facing the house – is comprised of the back wall of my 13′ x 8′ coop, a wooden gate, and the back wall of a 8′ x 4′ three-sided storage shed.

Jan had to come out to show me the scene of the crime: it was an odd sight of a pullet pulled through a small gap under the wooden shed wall and then partially eaten. All that was left on the outside of the pen were some well-stripped bones and a head. I could see some orange feathers under the wall, but didn’t know who it was. It didn’t take a predator detective to figure out the classic M.O. of a raccoon who often pull body parts though, or under, fencing. In almost 10 years of keeping chickens this was my first raccoon fatality (I had one other attack, but managed to intervene and save that hen). I have been incredibly lucky when it comes to predators: it’s always in the back of my mind, but it still came as a surprise when it happened.

I had just moved some teenaged pullets from the back coop to the main coop and assumed it was one of them. Even though I have an automatic door I go out every night, regardless of the weather, to make sure everyone is safely inside. Last night, some of the newcomers were slow to find their way in to the coop, so I rustled them all back home. When I’m introducing new birds I usually scan the storage shed with a flashlight to see if anyone is roosting in there. If so, they are carried back to the coop until they learn to return on their own. Everything had looked clear.

Extricating the other part of the corpse would take some doing so I went back into the house to shower and have breakfast. Upon my return a raven had come to scavenge her body and the bones had already disappeared (good thing I took photos). There was a new pile of scattered feathers. Don’t assume the second predator at the scene was the culprit.

At first, I thought the victim was one of the teenaged pullets who had found a place to hide for the night and missed my bed check. But then I started to doubt that theory. Chickens like being up high for safety. In my experience, when they don’t roost in the coop they like being in the shed rafters. Why would a hen make herself vulnerable by being on the ground? And then it hit me, someone had gone broody and was sitting on eggs. But who? I hadn’t noticed anyone missing.

I pulled everything out of the shed to retrieve the other half of the body and to identify who it was. My theory was right: there was a partially eaten body beside a pile of 14 green eggs. I cracked them open and all of them were undeveloped: someone had been laying them in anticipation of incubating them. Last night was the first night she’d sat on them.

It took me a minute to identify her: the head had a pea comb and she laid green eggs, so that meant it was one of my Ameraucana x; there was only one leg left and it wasn’t banded, but it was feathered and that could only mean one thing – she was my Mille Fleur D’Uccle x Ameraucana, Pixie. She had the muffs and beard of her dad and the feathered legs of her mother. I haven’t lost many birds, but when I have they often are amongst my favourites and that definitely was the case with her.

I got her from Joan, along with her sister and six other hens. As a half-bantam she was small, but with a big personality. I knew she didn’t always lay in the nest boxes but I had never seen her in that part of the shed. Things are tightly packed so there’d be just enough room for her to squeeze into the back. She sometimes laid on the ground, in the open area of the shed, with her sister. I had been finding two eggs, but recently only one, so I assumed she had started laying in the nest boxes. When you collect two dozen eggs a day it’s hard to keep track of who is laying which egg and when. 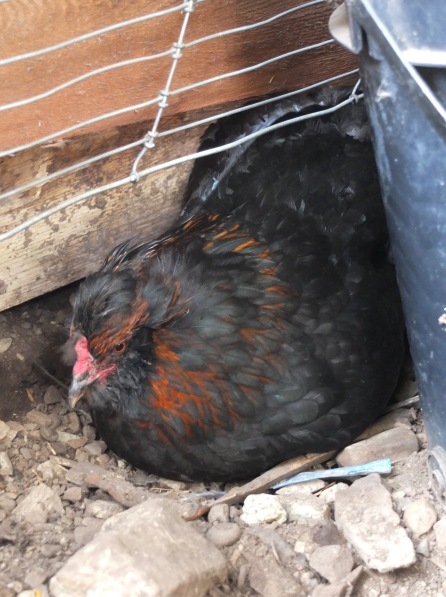 Eggs Laid In The Shed