I’ve had dozens of hatches with broody hens over the years and have rarely had to intervene to save viable chicks in abandoned eggs or those struggling to hatch. I’ve had four hatches so far this season and have had to assist viable chicks in two of them, both from first time mothers. In the first instance, I was able to tuck an abandoned egg from one hen under another and upon hatch return the chick to the original hen and its hatch mates.

Merecedes, my Silver Spangled Appenzeller Spitzhauben x, had been sitting diligently on ten eggs for 21 days. Five had hatched in the morning when I checked for any action on the remaining five. One had pipped externally and I could see its beak poking through the egg shell. By the afternoon she was sitting with the chicks in another part of the crate, off the remaining eggs. I scooped the pipped egg and it was still at the same stage as it had been eight hours earlier and was now, cold to the touch. I stroked its beak to see if there was any response. Nothing. I blew warm air into the hole and it moved slightly. So off I went into the house to see what I could do to help it hatch.

I wouldn’t intervene if the hen was still on the eggs, but since she had moved off them I felt this chick didn’t have good odds to survive without assistance. A small amount of egg shell had come off and I saw that the membrane was bright white which indicates that the blood vessels had all been absorbed. If there are obvious blood vessels you can gently pick off the egg shell, but don’t disturb the membrane until the veins have disappeared or the chick can bleed to death.

This chick had been in the egg so long that it was both weak and stuck to the inner membrane in what is called ‘shrink wrapping’: the membrane dries out and the chick is held into place unable to hatch. If it’s a healthy chick then it’s easy to assist. In this case, I was able to remove both the shell and membrane safely – keeping the membrane moist with a few drops of warm water so that in removing the membrane I didn’t pull off the chick’s downy feathers. There was a tiny blood vessel still attached at the umbilicus which tore and the chick started to bleed. I hadn’t experienced this before but I knew it wasn’t uncommon. I dabbed a bit of cornstarch on to the spot and the bleeding stopped immediately. 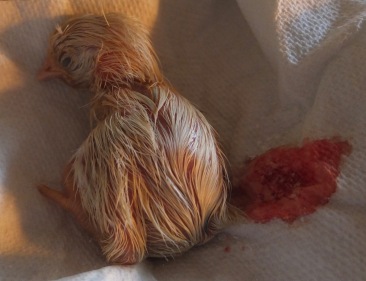 A natural hatch is preferred because in the process of zipping (turning around in the shell) a chick strengthens their legs and neck. Once the shell was removed this one was curled in a ball and I had to help it unfurl. It was cold to the touch so I decided rather than put it under a heat lamp I’d hold it. I placed it in a towel over a heating pad and cupped it in my hand. I continuously stroked it to keep the blood flowing and warm it. It was still cold to the touch for more than thirty minutes.

Just after hatch they are quite weak: a chick takes a while to gain the strength to lift its head and get its legs under them to support their body weight. I knew it was going to take some time till it was fluffed enough to remove to Mercedes, so I settled down to watch TV. After two hours, it was warm and alert enough for me to put back it under Mercedes, who had now settled in for the night and was back on the remaining four eggs. )When returning an egg or chick to a hen always hold in protected with your hand above it in case the mother inadvertently pecks it instead of you.) I decided to leave them as their best chances for a successful hatch were with her.

The following morning I checked back and one of the blue eggs had hatched overnight. The other three eggs hadn’t and she was now off them again. I was pretty sure they weren’t viable so I did a float test to confirm my suspicions.

The purpose of floating eggs is assess the air cell and embryo development. Unfertilized eggs have a small or absent air cell that won’t float an egg so they sink. Ruptured membranes allow the egg to dehydrate so they float well above the waterline. A normal, healthy chick will be contained in an egg with an air cell that floats 10-15% above the surface of the water.

Put the unhatched egg in a deep bowl of 99f degree water to see if they sink or bob. Make sure the eggs have not externally pipped or have any cracks in the shell or you’ll drown the embryo. Let the egg sit in totally still water and see if the egg moves or bobs. If they are a low, angled bobber – 10-15% above the waterline or off to one side or are actually moving they are still viable. Those ones are keepers. Vertical bobbers, high bobbers and sinkers are not. The remaining three eggs were high vertical bobbers. I cracked them open to see that they were either unfertilized or died in the first couple of days.

By the next day all the chicks were healthy and robust. The one I assisted had no issues – spraddle leg or curled toes – that are associated with problem hatches. This is the first year I have had solid or predominantly white or yellow chicks. This little one is yellowish with several black dots on its back, which unfortunately will probably disappear as its permanent feathers come in. 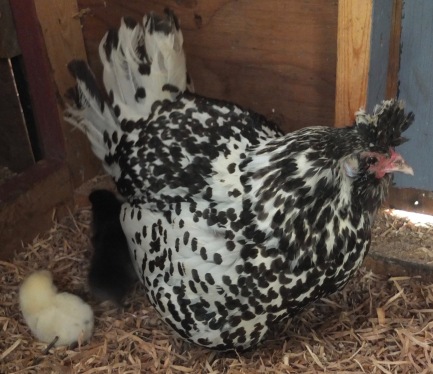 I label my hatching eggs with a sharpie if I know which hen laid them – its mum is Luna, a dun coloured Easter Egger. I don’t have any yellow legged birds, but she clearly carries the gene as several of her chicks this season have bright yellow legs. She’s one of my heavier hens that lays a large olive egg producing large, robust chicks. I was glad to see this one is a big, fuzzy chick that motors around with its siblings, none the wiser that it was close to death when I stepped in to help. Not all interventions have happy endings. 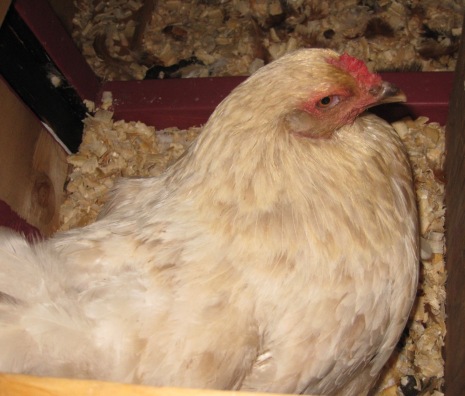 1 comment on “Assisted Hatch #3: Bitchin’ Chickens To The Rescue”