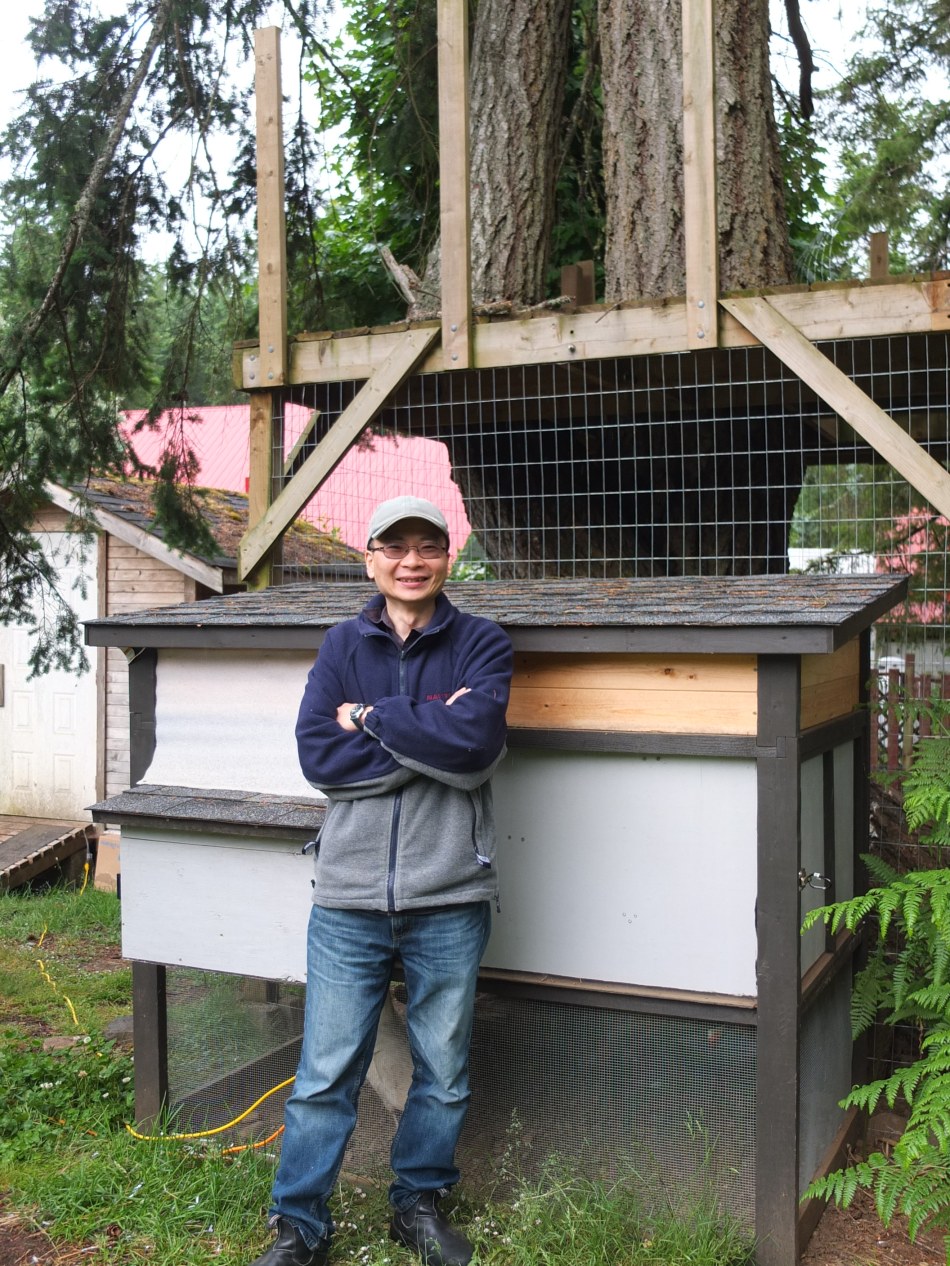 For the whole time I’ve lived on Gabriola – 19 years – I’ve worked in Nanaimo. That 6.3 kilometre trek across the ocean has required commuting by ferry. Getting to/from the ferry is a whole other challenge. When we lived close to the village I walked. Moving to the south end fifteen years ago has meant cobbling together inconsistent carpooling or having my partner, Jan, drive me.  It was a godsend when we got our local GERTIE bus service almost six years ago. I’m fortunate that not only am I on the express commuter run I also have a bus shelter at the end of my driveway. 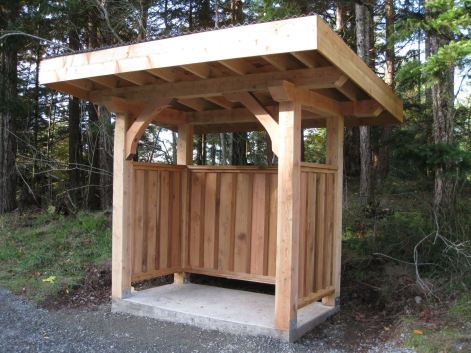 GERTIE Bus Shelter At The End Of My Driveway 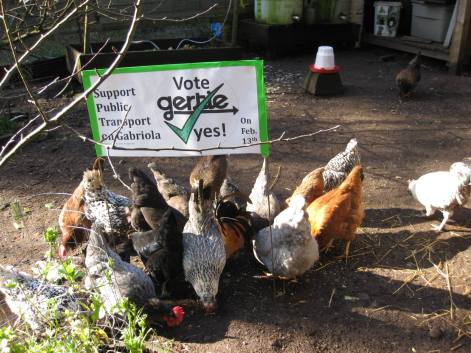 My Flock Supporting The ‘Yes’ Vote in The Referendum

I’ve ridden with about a dozen different drivers over the years: some I’ve got to know more than others, some more focused on the road than being chatty. George is the type more interested in getting his passengers safely to their destination than yakking with a bus full of school kids and commuters.

I’m often carrying hatching eggs or birds on the bus, and when not, I might be talking chickens. He asked me about buying some chicks and came to pick them up a few days later, accompanied by his wife Jia. On hearing he already had other birds I asked if he would let me interview him for Bitchin’ Chickens.

George Picking Up My Chicks 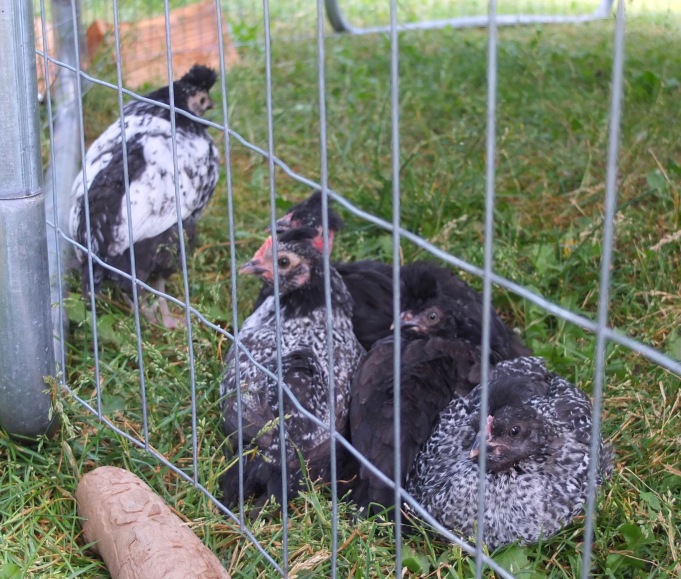 I headed over to their place the following week to see how my chicks were faring and to find out more about George. First impressions are a bit deceiving – when not behind the wheel he’s very chatty and on a number of subjects. Our two hours were spent talking about a wide range of topics, some that frankly, went over my head.

Chih-Chao was born and raised in Taiwan, taking the name George when he moved to Montreal with his family in his mid-teens. Like many Asians he adopted an English name – George which means ‘farmer’, although he says he doesn’t have a green thumb. It makes me feel a bit sad that we expect immigrants to make such accommodations, when they must experience the same kinds of problems learning such an inconsistent language like English. He seemed philosophical about it and uses both names depending who he’s with.

I quickly learned that he is interested in all kinds of disciplines and has explored many of them. For instance, the computer genius in his high school defied him to discover his password. George, who didn’t know much about computers at the time, accepted the challenge, spending months teaching himself how computers work and eventually figuring it out. He went on to become a hacker, cracking copy protections for games, fixing bugs in software and overriding gaming protocols so that his character became invincible and couldn’t be killed off.

His dad wanted him to study electrical engineering at McGill – he started in that program, then switched to computer science. Looking for a new challenge he also studied psychology. He was disappointed that his class of 200 students and 10 teaching assistants had no real interpersonal connections and found that the university “was too structured, too bureaucratic, unwilling to change much”.

A vivid dream, in which he was presented with three bridges all constructed of books, led him to believe that all his options ended in study. Next venture was 4 ½ years at Naropa University, a small private institution in Boulder, Colorado founded on Buddhist principles. George worked full-time in their IT department while getting a degree in Contemplative (Eastern) Psychology. It was a life of low pay, high benefits, a casual atmosphere and plenty of celebrations. Then 9/11 struck and his work permit was denied. Again, he was challenged to find a new direction and started over again back in Montreal.

He volunteered for a Buddhist organization while figuring out what his passion was. For awhile he studied hypnotherapy and supported his exploration of the spiritual aspects of life while working in IT. George toyed with the idea of studying industrial automation and design, appreciating the marriage of electronics, machining and computers.

His Eastern spirituality/philosophy blog explored themes such as past life regression and future life progression. He was contacted by a young woman, who expressed an interest in communicating with him. Assuming it was a phishing expedition from a ‘hot girl’ he sent her email to his spam file. She persisted and contacted George again, this time explaining a bit more about who she was and how she’d read his blog. It turns out that Jia was a bit of a fan girl.

They struck up an online relationship, met each other in person and then George moved to China where she was living. They married, had a son and decided to move to Canada. Living in mainland China was a bit of a culture shock for someone coming from North America. George didn’t like the restrictions, the emphasis on materialism and the lack of democracy. A bit of a rebel, he resisted bowing to power, which would have been a problem had they stayed.

The family of three settled in Montreal and had another child, a daughter. In China, Jia had worked in advertising and commercial art; in Canada, she didn’t speak English and didn’t find the transition easy. They were seeing a marriage counsellor who was working through ways to make their lives less stressful. They used a score chart to determine how to achieve their goals, concluding relocating from a big city with cold weather would help. Their list of potential cities: Toronto, Vancouver, Ottawa and Taipei all proved too expensive.

High on their list of must-haves was a warmer climate, which would reduce George’s migraines triggered by the cold. One of Jia’s priorities was to live in a city with accessible Chinese take-out. If they couldn’t afford Vancouver they wanted to be as close as they could get. True to George’s investigative nature he studied a variety of factors that would influence their final decision: house prices, crime rates, population and even, predators like cougars.

They came across the phrase “living simply is difficult” when pondering a move to off-grid Lasqueti Island. They weren’t up to that, so opted for a community with more services and greater accessibility to a city. Jia had to forego the notion of tasty Chinese take-out when they made the move here.

They had hoped for a 5-acre lot but couldn’t find anything at the time, settling on a ½ acre with a large house, double garage and a garden where Jia could plant some flowers and berries. There was already an offer in place, which fell through, allowing them to get a toe-hold into our real estate market.

They’ve been here almost three years. George has gotten involved with various aspects of island life. He joined the Volunteer Fire Department, attending six fires in his first year. When Jia was taking English classes in Nanaimo they couldn’t figure out the Gabriola bus maps. He approached the GERTIE bus group offering his expertise to get their schedules and routes onto google maps. It was a frustrating year’s task as the information is variable and fluid. Through that connection he became one of their drivers. He’s worked doing maintenance at The Haven and still works in IT. When we met up he was just heading out with son, Josh, for a weekend camping trip with the Scouts.

Jia was more shy about being interviewed. She brought us ginger tea when we were outside with the chickens, but declined sitting with us. Later I chatted with her, with a bit of help from George as translator. She’s more introverted than him which makes it harder to make new friends in a strange place. With her kids at school and husband working she spends a lot of time on her own. Despite that, she says she enjoys the quiet life on Gabriola, with fewer but more friendly people than being in a city. She likes their chickens and loves their eggs.

They got their chickens almost two years ago. George built their first coop from salvaged materials and found his first time construction project wasn’t up to snuff and rebuilt it the next year. They’ve utilized the space under a partially built tree fort, left from the previous owners. He’s fenced around the foundation posts and blocked off gaps in the platform above. 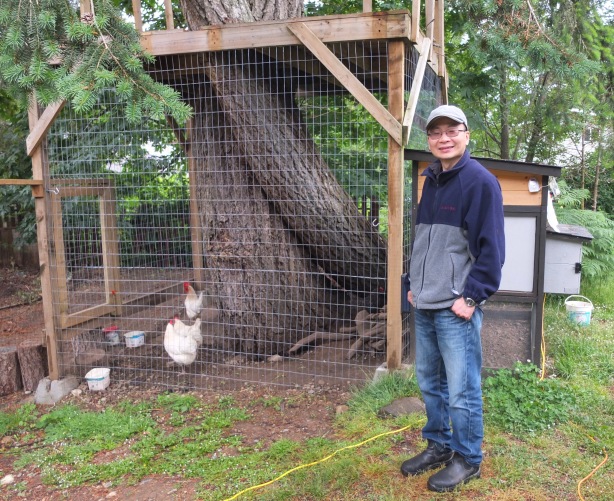 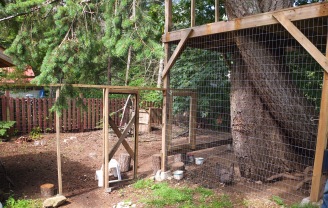 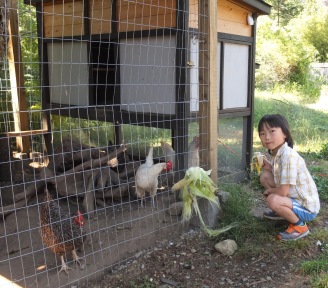 They’ve got two Barred Rock and three mixed breed hens which are allowed into a larger fenced run under supervision. He pointed to “the queen of the flock”, a hen he says “has power without having to exert it”. 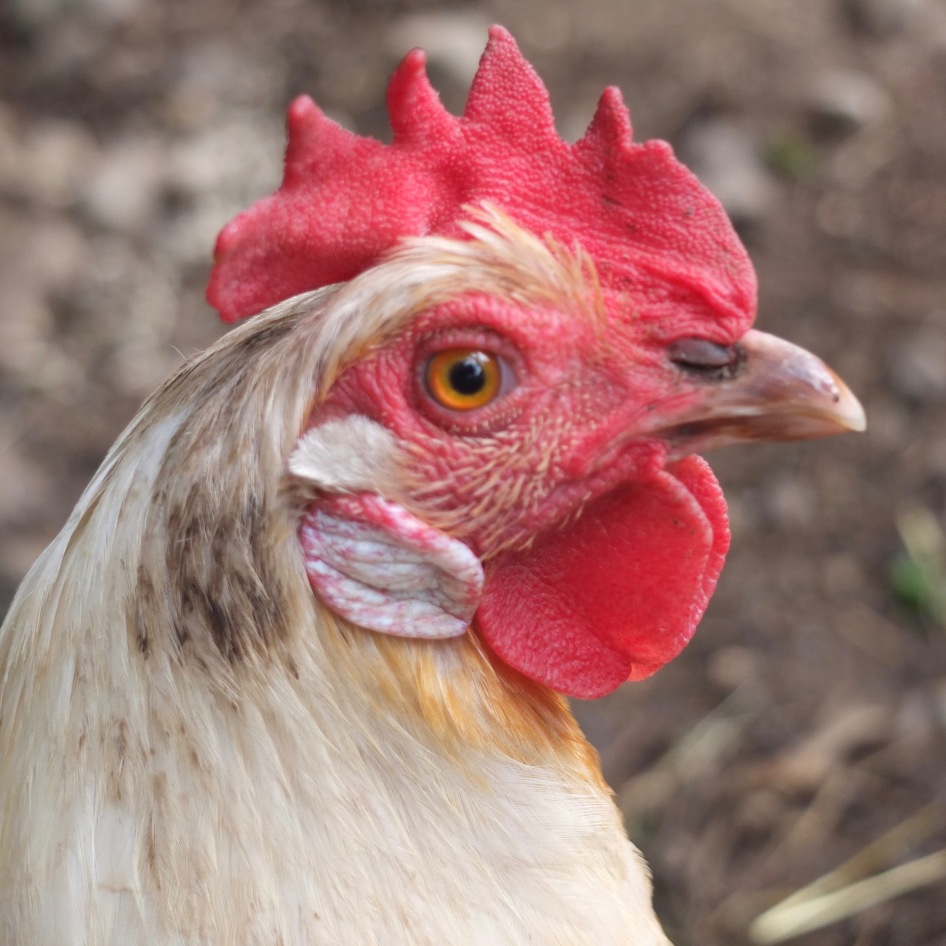 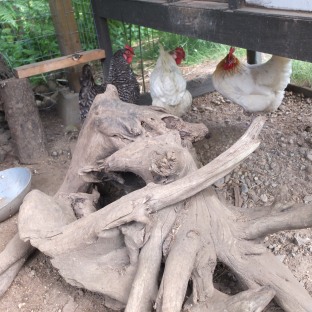 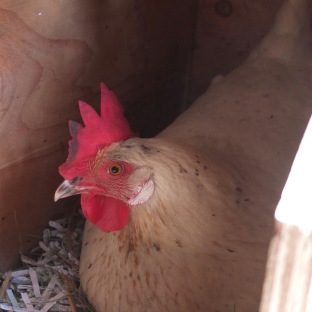 George’s Hen In The Nestbox 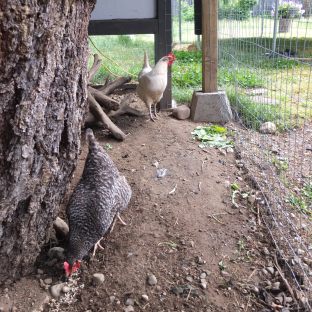 Having chickens has been a bit of a learning curve: they can fly over the fence to the neighbours’ yard and make divots in their lawn with their scratching and dust bathing. George and Jia assumed they would nibble grass neatly like sheep. Anyone who’s had chickens will tell you that your jungle will be a dustbowl in no time.

They’ve repurposed a trampoline that was also left on the property: George has wired the bottom and made a portable chicken tractor. That’s where my five chicks were when I dropped by. They are allowed out during the day and George carries them back to a shed for the night until they get bigger and are more easily integrated in with the adults.

They’ve had some issues with raccoons wandering through so he’s rigged up a baby monitor at the coop so they can listen for the warning signs of squawking and he’s got a solar powered light for when he’s checking the coop at dusk. 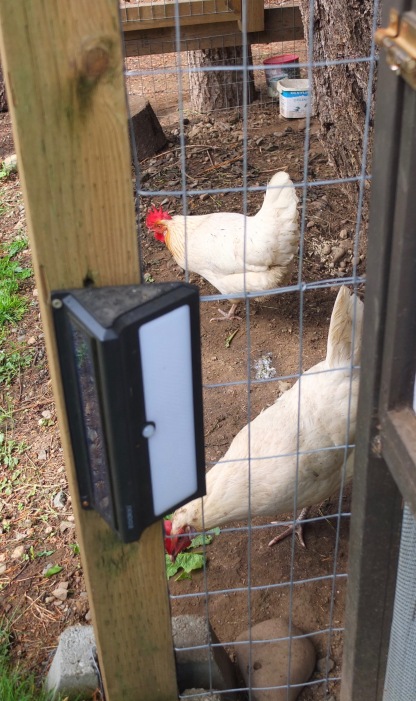 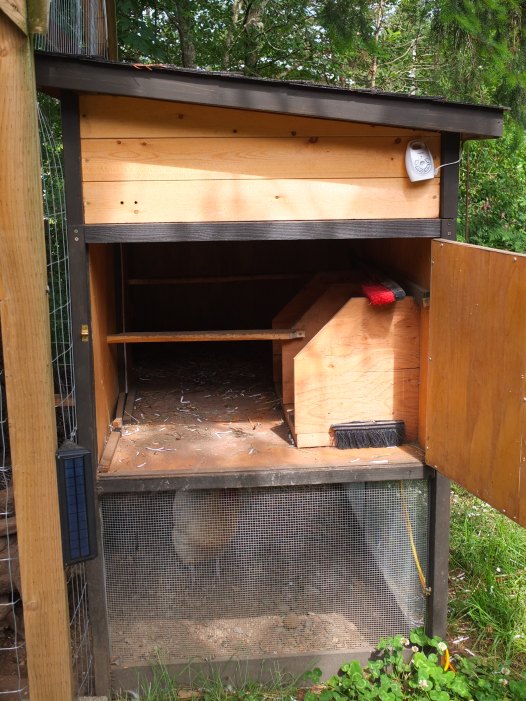 When I started this blog almost nine months ago I didn’t even know what a hyperlink was. I’ve fumbled around and discover new features and functions all the time. One of my goals is to be on Instagram, a platform developed for folks wanting to upload photos using their cell phones. The only glitch is I don’t use a cell phone. I’ve done some cursory online research and know there is a way to upload using a desktop, but haven’t figured out how to get there.

When George walked me to my car I asked him if he knew anything about Instagram. He didn’t, but I challenged him to solve my dilemma. If what I suspect is true about his nature – that he loves to understand how things work and to learn new things – then I think it won’t be long till you can find me on Instagram too.

0 comments on “George: A Man Of Many Talents”