For the past four years I have had arrangements with various elementary school in which I donate hatching eggs and get back whatever chicks they hatch. Until this year the hatches were relatively uneventful – a few eggs that didn’t hatch or chicks that died at hatch – but nothing noteworthy. A couple of weeks later, I got a boxful of healthy, robust chicks.

This year I donated eggs to two elementary schools and both of them had issues. One teacher had hatched before; the other was totally inexperienced. I don’t know what kind of incubators they were using or if they were able to maintain consistent temperature and humidity levels. That’s important because fluctuations within the incubator can mean chicks hatch late, may need assistance to hatch or have issues like curled toes or splayed leg.

The two schools hatched twenty-two chicks between them. Hatching generally takes place after twenty-one days of incubation. Only three hatched on target, and most were on days 22-24. Two latecomers had to be assisted out of their eggs on day 26! One was fine, and the other struggled from the outset and died at 11 days old. Four others died, including one who developed a slipped Achilles tendon, before I picked them up.

The ones I did get back seemed healthy. Either I didn’t notice at the time, or it happened in my care, but another chick also developed a slipped tendon. I’ve been very lucky, in having hen-raised chicks never to have had foot and leg issues related with incubator hatches. Slipped tendon can sometimes be mistaken for a dislocated femur so I did a Google search and got some advice from the FB group Crossbeaks, Special Poultry & Friends.

Slipped tendon can be caused by vitamin deficiencies, but is mostly attributed to slippery surfaces in the incubator or brooder. The tendon in the lower leg slips out of the groove on the back of their leg. If you have a chick with this condition you can use your thumb to feel the tendon rolling.

Symptoms of Slipped Tendon in Chicks

Once I determined it was a slipped tendon I set to work trying to see if it was still possible to fix. I didn’t know how long the chick had suffered with her leg like this, what damage had been done and if, at this point I was looking at a cure or just trying to mitigate any further damage.

If caught in time (i.e. first 24 hrs) the remedy is to extend the leg backwards, hold the knee joint between your thumb & finger and roll it back and forth. If the tendon has slipped, you will feel it snap back into place (and possibly back out again, if the bone is not sufficiently developed). If you don’t feel the tendon pop in, your bird may instead have a rotated femur, which requires surgery. Once back in place you should use vetrap to hold it so the tendon stays in proper position. From my research sometimes this works and is a cure, and sometimes the tendon repeatedly slips and can’t be fixed. The key is to catch it early, something I wasn’t able to do.

My chick had possibly been holding her leg in a bent position for days which meant there was no way I could straighten her leg to get the tendon into place without doing further damage. I set about doing physiotherapy with her to stretch the tendon and strengthen the muscles in her upper leg. For several days I brought her into the house, and while I watched TV I massaged, stretched and bent her leg over and over. She was a most accommodating patient and slept through most of it – I’m not sure if she was relaxed or just dulled by pain.

Slipped Tendon – Swelling At The Hock 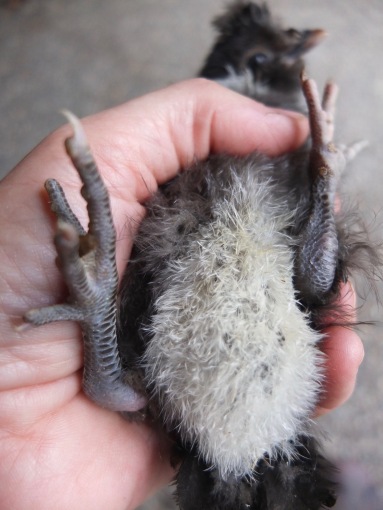 Slipped Tendon – Swelling At The Hock

I could see what her leg should look like (check the normal leg for comparison) but was doubtful I could achieve it. I could feel the tendon and could roll it under my thumb but the thought of pushing it back into place filled me with dread because I knew it would take considerable force and I might do more damage. Several times I pushed hard on her knee and that was the only time she cried, and still no success.

I was advised to splint her leg to minimize its rotation as she grew older. I did so and by the next day her foot was swollen and her leg hot and red so I gave up on that. I was told that it was too late to get the tendon into place, which meant that she would never have use of that leg and a normal life.

I visualized her growing up and being adopted by someone who had the time and inclination to have her as a house chicken. Or someone with a very small flock of laid back and well protected hens because she’d be a target for bullies and predators, and certainly no rooster. I knew I wouldn’t be able to keep her but I tried to remain hopeful for her future.

I did days, or rather evenings, of physiotherapy. It would have been better had I been home and able to do shorter, but more frequent sessions, but working during the day meant long sessions only once a day. After a few days I could see that while the other chicks were growing and getting stronger she wasn’t. Soon they’d be out in the pen and she wouldn’t be able to keep up. Her leg was hot and swollen, the side of foot had already developed a callous where it turned out and got rubbed when she hopped. Those things would only get worse before they got better, if they were going to get better.

There comes a point for all animal stewards in which we are confronted with making decisions for another being. What were her prospects as a disabled chicken? Was she even going to make it to adulthood? What would the quality of her life be? I am a firm believer that life, in and of itself, is not enough. There has to be a quality of life.

I made the difficult decision to euthanize her believing that the quality of her life would be severely compromised.

My friend, Tracy, had a chick with a slipped tendon. She tried to describe what was going on, and without seeing it, I misdiagnosed it as spraddle leg. She made him a hobble, which might have been more effective if that was the correct diagnosis; it probably did some good by restricting further rotation of his leg. 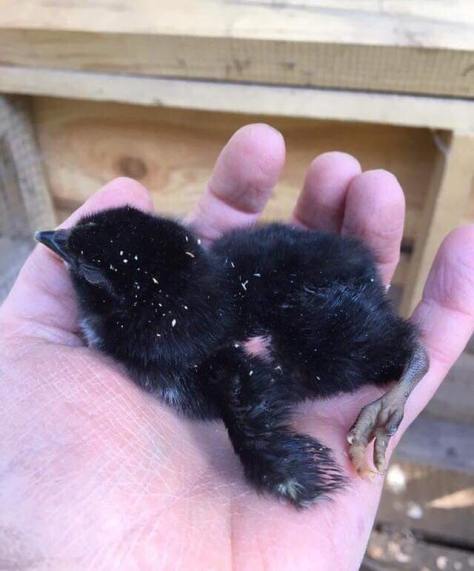 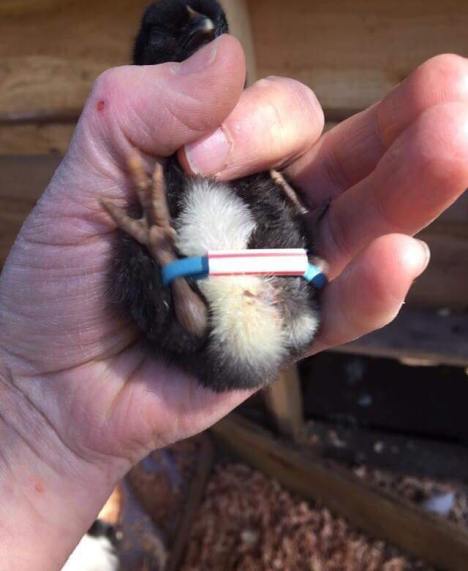 The chick, McNugget, did remarkably well hopping on one foot, getting around the yard, up the ramp to the coop and even flying up to the roost bar. Tracy was fine to keep a special needs chick; unfortunately what she thought was a pullet, ended up being a cockerel. She and Keith have a rooster and didn’t have room for another. We posted ads but there is stiff competition between cockerels and it proved impossible to find him new digs. She had our friend Thomas butcher him.

Looking at McNugget’s leg post-mortem, Thomas said there was a lot of calcification at his knee joint. I would imagine this extra bone growth in such a young bird would only get worse over time and be a source of some pain.

I think Tracy only took flattering photos of McNugget – always trying to get his good side. That’s too bad because his leg was bent at a 90-degree angle at the knee, which made for a pretty dramatic sight.