Understanding your chickens’ digestive system will help you navigate any problems that might affect it. Avian digestive systems are different from ours: their food travels from their beak through the esophagus to the crop: the holding area where food is moistened, stored and sorted, then sent on to the equivalent of our stomach. In chickens, that consists of two parts: the proventriculus, where easily digested food is processed by acids and enzymes; and the gizzard, which deals with food that requires breaking down with muscular contractions and grinding grit. Processed food then moves into the small intestine and the remaining digestive tract. 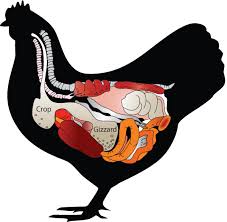 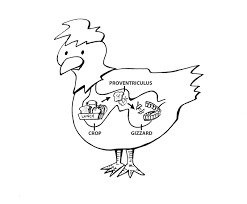 The crop is located in the middle of the upper chest. If it is firm it is full.  A healthy full crop should be about the size of a plum, full at bedtime and empty in the morning. The first time new chicken keepers see a full crop they often go into panic mode because it looks like a large lump on one side of a chicken’s breast. A full crop at night is a good thing; if it’s still full in the morning that’s cause for concern.

Various crop issues can affect digestion, which can be serious, or even life threatening. Typical symptoms include: weight loss, lethargy, turning their head from side to side, pasted vent, increased thirst, decreased appetite and isolation.

Sour crop: Occurs when the crop empties slowly, allowing food to sit, ferment and develop a yeast infection (candida albicans). The crop feels large and squishy, not firm. You may hear gases or gurgling if you touch it. I don’t have a great sense of smell, but if you do, your bird’s breath might smell bad. 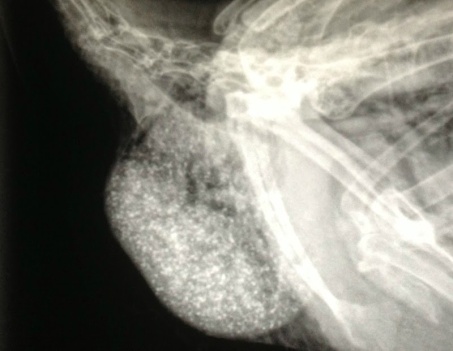 Impacted Crop: An impacted crop will be firm and large like a tennis ball, may be tender to touch and does not empty overnight.

In either case, your chicken may look ‘off’ and lose weight. An impaction may also affect the gizzard, where you can’t see the blockage.

Possible causes of sour crop and crop impaction include:

I’ve only dealt with crop issues once. I noticed my hen, Bif Naked, had difficulty flying up to the roost bars one night. I did a quick physical exam and didn’t find anything worrisome. In the morning, when her crop should have been empty, it was still full and felt squishy.

I separated her so I could monitor her input and output. I gave her water, grit, yoghurt and added apple cider vinegar (ACV) to her water (you can also put Epsom salts in their water).

I tried tipping Bif forward and massaging her crop upward in an attempt to get her to vomit whatever was there, with no success. You need to do this carefully so your bird doesn’t suffocate, or aspirate the contents of their crop into the lungs.

After a couple of days of that regime things didn’t get better, but worse. Her crop was now feeling hard. The most common treatment is to gently massage the crop to assist  emptying it. Sometimes that works immediately; in my case it didn’t.

I repeated the massage morning and evening. I carefully syringed a small amount of olive oil into her mouth and also gave her small pieces of soft bread soaked in olive oil, in the hope they would act as a lubricant. Still no joy.

At some point you have to make a decision about your bird’s future prospects if there is no progress. Bif was affected for about ten days: during that time I had tried all the recommended remedies. I was about to throw in the towel when, during one of my massages, I felt a popping under my fingers. Somehow I managed to break the encapsulated impaction and by the next day she had turned the corner.

I later learned that I could have given her Monistat, an over-the-counter product, which is used for vaginal yeast infections. Cut one suppository into 1/3 and give orally once a day for a week. You can also give .25 cc Monistat cream orally twice a day for a week.

If the crop is severely impacted the only option is surgery. Some folks are willing to go that route and if you are, I strongly advise you to take your chicken to a trained vet who is experienced and will provide anesthetic. I don’t recommend at-home surgery for dealing with impacted crop.

Damage to the muscles can occur from a previously impacted crop. Pendulous crops are initially treated by giving water only for 24-48 hours to allow the crop rest. It’s recommended to reintroduce regular food with plenty of grit afterwards. Treats, seeds, scratch, fruits and vegetable consumption should be avoided until the crop has returned to normal functioning.

I’ve only twice seen a pendulous crop: it appears enlarged and flops from side to side when the chicken is moving. In both cases, these hens were living with long-term pendulous crop – one of them for three years. Both seemed to be functioning normally and had no further issues related to their condition. You can buy or make a special bra to support a pendulous crop.