I have a few pet peeves; the more you get to know me the more you’ll hear about them. This week’s grumble is about antibiotics.

You’ve probably been hearing about the global crisis around antibiotic resistance. For most of us it’s a hidden epidemic that we may not have to deal with until it affects us personally. So how did this crisis happen? In short, two reasons: our over-reliance on antibiotics in the food-chain and as drugs to treat bacterial infections in people.

Antibiotics are a class of prescription drugs that were first developed in 1927 to fight illnesses caused by bacteria. The problem is that they’ve become the go-to for too many people: they’ve been over-prescribed, misprescribed (i.e. used for viral infections) and not taken for the recommended duration.

Bacteria are living organisms and they’ve learned to circumvent our attempts to thwart them. Antibiotic resistance occurs when bacteria change in some way that reduces or eliminates the effectiveness of those drugs to prevent or cure infections. Resistance results in subtle genetic changes that allow organisms to counter antibiotics’ attacks on them, altering their cell walls to keep drug molecules from attaching or penetrating, or forming tiny pumps that eject the drugs after they have entered the cell. The bacteria that do survive continue to multiply – producing drug resistant offspring – causing more harm.

What slows the emergence of resistance is using an antibiotic conservatively: at the right dose, for the right length of time, for an organism that will be vulnerable to the drug, and not for any other reason. Most antibiotic use violates those rules.

“Drug-resistant superbugs are as big a threat to the world as climate change or wars, Britain’s Health Secretary Matt Hancock warned. ‘I could not look my children in the eyes unless I knew I was doing all in my power to solve this great threat,’ Matt Hancock said during a speech at the World Economic Forum in Switzerland. Drug resistant bacteria is projected to kill 50 million people annually by 2050.” (CNN January 24, 2019)

I’m sure you’ve seen the advertising campaign aimed at elementary school kids: Not All Bugs Need Drugs. Did you know that antibiotics are ineffective in the treatment of viral infections? So why do we keep using them when we’re not sure if what we are treating is a bacterial or viral infection? One-third of antibiotic prescriptions in North America are deemed unnecessary – including when used for some bacterial infections.

As a Health Promotion Educator I cringe over the use of anti-bacterial soaps and hand sanitizers. They proudly announce they can kill 99.9% of bacteria. So what? It’s not only unnecessary, it’s harmful. 80% of bacteria are actually benign or more importantly, helpful. Antibacterial products don’t just target the ‘bad’ bacteria, but the others as well. We’re essentially throwing out the baby with the bath water. What happened to thinking that exposure to a few germs actually boosted your immune system?

Of greater concern is that 80% of the antibiotics we are exposed to is through meat products, most commonly beef, turkey and chicken. Farmers began using drugs – in large amounts on a daily basis – that allowed animals to convert feed to muscle more efficiently, which resulted in the ability to pack more livestock into barns.  Antibiotics were then administered to protect animals against the likelihood of disease. Those discoveries, which began with chickens, created “industrialized agriculture”.

There’s been a move away from big-agribusinesses routinely using antibiotics on farm animals, but what does that actually mean for us as consumers? 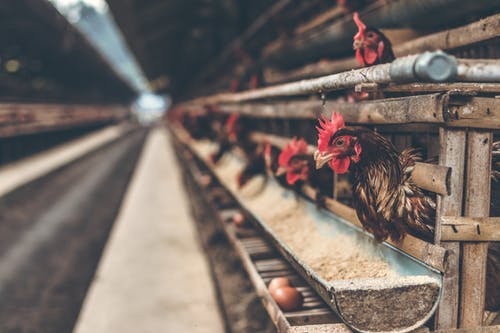 In Canada, antibiotics are approved for use in beef, dairy cattle, chicken, laying hens, turkey, pork and fish. They may also be sprayed on fruit and given to honey bees.

For my American readers: the USA uses five times more antibiotics in livestock than the UK.

Organic: Antibiotics have not been given to animals raised for meat, poultry, dairy, and eggs.

The exception is chickens and turkeys can be given antibiotics in the hatchery while the chick is still in the egg and on its first day of life.

Raised without antibiotics, no antibiotics ever and never given antibiotics: on  chicken or turkey products means antibiotics were not used at any point, even in the hatcheries. Sick animals that required antibiotics would be removed from the ‘no antibiotics’ line and sent for processing with animals raised under lower standards.

No Medically Important Antibiotics: as of 2017, antibiotics used to treat people—such as amoxicillin, erythromycin, and tetracycline—have never been given to the animals.

No Critically Important Antibiotics: the company has stopped using only antibiotics that are medically important to people. Most drugs in this category aren’t typically used in chicken production so this term doesn’t represent a real change in industry practice.

Those labels feel a bit deceptive to me and one more reason to buy local. If you eat meat get to know and support your local farmers and stores that carry their products.

And lastly, as chicken keepers I think far too many of us feel like we need to give antibiotics to our birds. I’m a member of several Facebook farm and chicken groups and more  often than I can count I see folks giving out armchair medical advice. Most of us are not vets and have no medical training, but are just trying to be helpful in sharing our own experiences.

The problem with that is along with giving out factual information, making correct diagnoses and steering people in the right direction we also, too often, do the polar opposite. How often have I read: “I don’t know anything about this , but …” or “I’ve never seen this, but …” and then offering a diagnosis and treatment regime, which often includes the use of antibiotics. When in doubt, express your empathy or concern in a gesture of support, but don’t counsel others to routinely use drugs which may be unwarranted.

Chickens are not no maintenance animals. Far too many backyard keepers have no idea what they are getting into and are totally unprepared to deal with an emergency. My advice:

Chickens get external and internal parasites, viral and bacterial infections, injuries, are attacked by predators, have issues with their respiratory and reproductive systems and a whole host of things you never imagined before embarking on keeping them. Most of these conditions do not require the use of antibiotics, but that is what is often recommended in online groups. Your chicken has a sniffle? Antibiotics. Looks under the weather? Antibiotics. Isn’t eating and drinking normally? Antibiotics.

Some of you may have discovered that you can’t buy some of the chicken meds that used to be available over-the-counter at feed stores. In Canada, as of December 1, 2018, all medically important antimicrobials for veterinary use can only be sold by prescription.

Best practices for the use of antibiotics for your flock:

We’ve overused them on ourselves, on the animals we eat and the animals we raise. We’re now in a situation where there have been very few new antibiotics developed in the last 50 years and many of the ones we have relied on are failing us. Sometimes being sick is just a normal part of life, we feel crappy and we get better. We need to exercise some preventative measures, for both ourselves and our birds, to keep healthy and use antibiotics if, and only if, that is what’s called for.

2 comments on “Antibiotics: If Your Only Tool Is A Hammer …”