Ascites is not an illness or disease; rather it’s a symptom of one. Also known as Pulmonary Hypertension Syndrome or Water Belly, Ascites can occur as a result of dietary, environmental or genetic factors, which create physiological and metabolic changes, leading to abnormally high blood pressure causing heart failure and excessive build-up of fluid in the liver, which then leaks into the abdomen.

Several diseases can cause ascites, including conditions that impair liver function due to the inability to produce enough protein to maintain pressure to keep fluid in the circulatory system, resulting in fluid retention.

Damage to the liver can be caused by:

Amyloidosis: the accumulation of abnormal proteins (amyloids) in one or more organ systems; common in older birds.

Egg Yolk Peritonitis: (EYP) inflammatory response caused by the presence of yolk material in the peritoneum (the thin layer of tissue covering the inside of the hen’s abdomen and most of the organs) from a ruptured egg or a retained egg in the oviduct. The yolk material itself may only cause a mild inflammatory response, and be reabsorbed by the peritoneum.

Heart Failure: the heart is unable to adequately pump the fluid within the blood vessels causing a variety of problems. Fluids back up into the lungs and other organs causing them to fail. This water overload can cause leakage into the peritoneal cavity and the formation of ascites.

Ovarian cancer: common in commercial laying hens who have been intensely bred for high egg productivity and reduced broodiness instinct. The hard surface of the ovarian tumor may cause irritation of the peritoneum causing it to leak fluid.

I had a two-year old Gold Laced Wyandotte hen who looked healthy in most regards, but never laid. Just when it looked she might produce her first egg she developed the symptoms of being egg bound or a similar reproductive system issue. My friend, Thomas euthanized her and took these photos. Upon necropsy it was apparent that she had suffered from ascites that was associated with Ovarian Adenocarcinoma.

Whether a bird can recover from ascites will depends on the underlying issue. Sometimes just dealing with the water retention is enough, while other times it’s a stop-gap measure. Only a qualified veterinarian can provide the testing to determine what  might be the cause of ascites in your bird.

If you don’t know what caused their ascites you can try to drain the fluid and monitor their progress. Some birds recover fully, some need to be drained intermittently, while others will die or require euthanization.

There are many good online step-by-step guides and videos available that explain the process in detail. In a nutshell, you (or your veterinarian) will need to use a large intramuscular syringe to drain off a small amount of yellow, watery fluid (1/2 cup or 4 fluid ounces) from the abdomen. Be careful not to hit a vein (if there is any blood, choose another location) or to drain too much, which can cause the bird to go into shock from fluid loss. 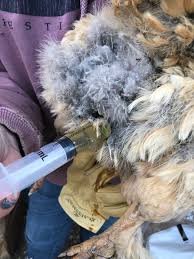 Post procedure: return your bird to a quiet area for a few minutes of observation before returning to the flock. The procedure can be repeated in a day or two. Ascites is not contagious and no isolation is necessary.

Note: I have had two hens presenting with ascites; in both cases, the post-mortem exam indicated they had ovarian cancer. Water retention can often deceptively make a hen appear robust and healthy. It’s important to do a physical exam feeling the keel (breastbone), which should be well padded and not sharp. It you can feel a prominent keel then significant weight loss has occurred, countered by the weight gain from fluid retention. In those cases, I would advise euthanasia.