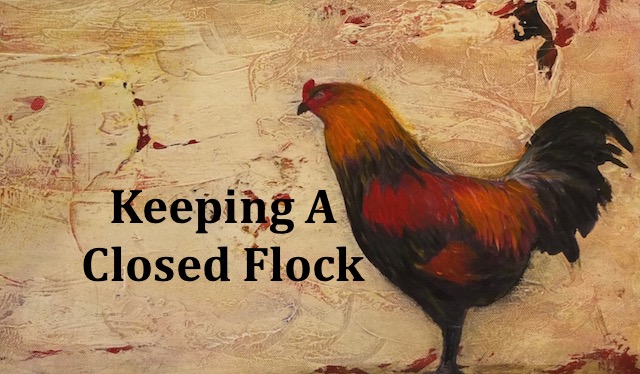 The concept of keeping a closed flock can mean different things to different people. In this post I’ll explore two different versions and how they can play out on the ground. One is a proactive measure to prevent pathogens from entering your flock and the other is reactive to keep them from leaving.

I got my first chickens in 2005: eight pullets, which I got from a local heritage livestock breeder.

Two years later, my neighbour complained that my free-ranging flock had suddenly discovered their garden. Faced with penning them and still having to contend with potential conflict I opted to find them a nice home on acreage. I got those birds all at once and all from the same source and re-homed them all at the same time to the same farm. That simple, yet uncommon, practice among small flock chicken keepers is called ‘all in, all out’ and is an important cornerstone in maintaining flock health.

Even though I didn’t understand it at the time, probably the main reason that my flock was so healthy was that I had unintentionally kept a closed flock.

I took a four year hiatus and got birds again in 2011. Let the adventures begin.

I started with four pullets and when one went broody I kept some of her chicks. Over the following years I hatched chicks, bought birds from local breeders, took in rescues and even found abandoned birds at the side of the road. I didn’t have the space and know-how to adhere to a sufficient quarantine period. Even if I had, quarantine has it’s limitations (i.e. it can’t tell you of underlying pathogens carried by asymptomatic birds).

I also did what many chicken keepers do: I visited friends that had chickens with no regard for what I might be tracking on my shoes or clothes into their flock. I borrowed crates or equipment without thinking of what hidden pathogens might be stowed away and carried in to my flock. In short, I threw biosecurity protocols out the window.

Last year I had a number of issues, many of them firsts for me, that made me take stock of how I could better manage my flock. It’s easy to get sucked into the lure of getting just one more bird, but they have a insidious way of accumulating and, I think, to the detriment of the health of one’s flock.

I made a conscious decision to practice reverse ‘Chicken Math’ and re-homed about half my flock in order to really concentrate on the ones that remained.

The intention of that form of closed flock is to prevent disease transmission. The other is when you discover (often via necropsy) an infectious pathogen in your birds, which will render them carriers for life. There are a number of diseases in chickens that can be treated or managed, but not cured. Birds infected with the following will act as life-long hosts and potential vectors for transmission:

Between A Rock & A Hard Place

It turns out that my return to that tried and true practice of keeping a closed flock came a little too late: by then I had symptomatic Marek’s Disease in my flock for the first time. After that the idea of a closed flock took on a whole new meaning.

Marek’s is one of those things that fills chicken keepers with dread. After a necropsy confirmed the diagnosis I couldn’t even talk about it for a few months. I think I went through all the stages of grief: denial, bargaining and probably a couple that weren’t even on the list.

After the last loss, I contacted the Avian Veterinarian who performed the necropsy and we spoke for almost an hour. I felt reassured after our conversation that her diagnosis wasn’t necessarily the end of my flock as I knew it. She told me that MD was ubiquitous and to assume all small flocks carry it, whether birds are ever symptomatic or not. There are many strains of Marek’s, some more virulent than others and it’s still a mystery why some birds get sick and others don’t. My best strategy to keep my birds healthy as they are less likely to get sick.

We talked about the option of culling a whole flock in order to start afresh. She said that too many people jump the gun and euthanize all their birds thinking that it’s their only option when many of those birds might not be carrying the pathogen or ever get sick even if they were.

I would strongly recommend that if you have unexplained or multiple deaths that you invest in a necropsy to find out both the cause of death and anything else that might be affecting your flock.

So what do you do if you’ve had a diagnosis of a pathogen that has the potential to affect your flock for the foreseeable future?

Assume that all your birds may be potential carriers and can be for life, regardless of whether they show any symptoms or not.

As mentioned above, some folks feel their only choice is to ‘depopulate’ – the rather euphemistic term meaning to kill your entire flock, disinfect your coop and all your equipment and start from scratch.

Some pathogens, like Marek’s Disease, can live in the environment for up to 65 weeks so, practically, you will need to take a hiatus from getting new stock for more than a year. And because MD is carried by wild birds, rodents and even the wind you might end up right back where you started.

Many folks, understandably, can’t stomach the thought of culling healthy birds that may never get sick. In that case you can adhere to the second option by keeping a closed flock, which includes the following limitations:

There’s an old farmers’ adage that says all health problems are bought and sold — meaning that you acquire health issues with the back and forth trading of new stock.

If you are committing to this type of closed flock you can keep relatively healthy chickens, with occasional losses. As your birds get older your hens will lay less often, or maybe not at all. You should only add vaccinated birds until your original stock is gone and the pathogen has been entirely eradicated from your coop and surrounding property.

It is really critical that if you have an infectious pathogen in your flock that you choose one option or the other and not re-home any of your birds where they can potentially infect someone else’s flock. Keeping a closed flock also means being vigilant, attentive and honest.

4 comments on “Keeping A Closed Flock”