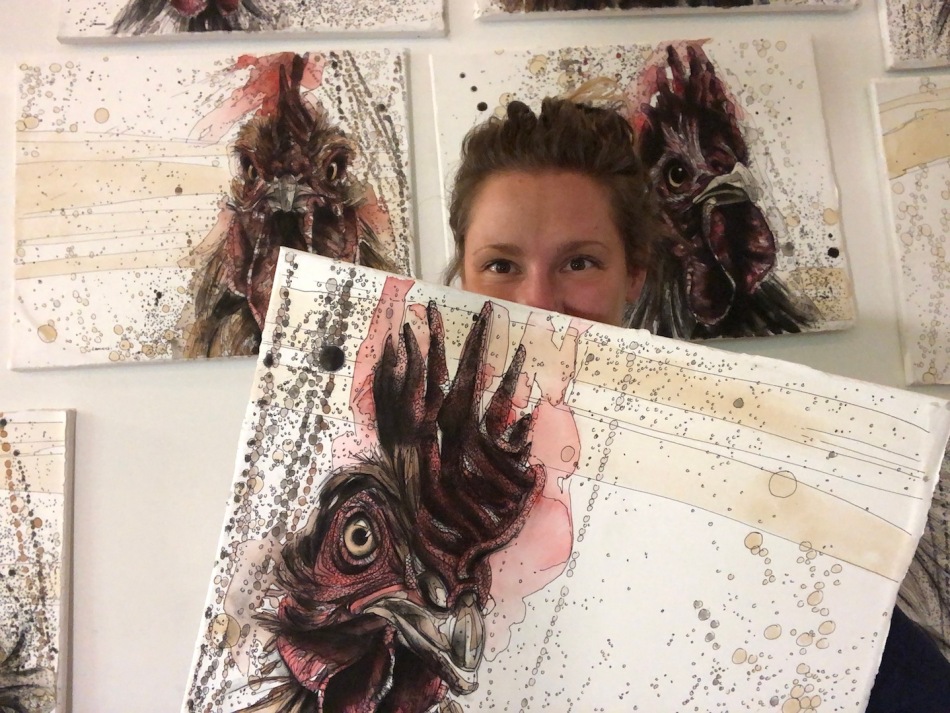 Jade and her family moved to Gabriola Island not quite 18 months ago. I remember reading one of her posts on our local Facebook community bulletin board looking for housing materials for their geese that they’d brought with them. She contacted me subsequent to that looking for chickens, but I had none available.

I met her for the first time a couple of weeks ago during the 24th annual Studio Tour. It was to have been a self-guided tour of 95 local artists’ work over the Thanksgiving long weekend. Most galleries decided to close due to Covid 19, but Jade was one of the few that opted to stay open.

She advertised her studio with a piece of chicken art so I was expecting to see birds, but I was surprised at how many chicken images there were: in paintings, on cushions, cards and even a calendar. It was one of the few times I wasn’t carrying my camera, so I made a time to meet up later in the week to take some photos and find out more about her.

This is the 36th profile in my series ‘Having Chickens Is A Great Way To Meet Your Neigbhours’, so I’m well practiced at interviewing chicken keepers. Some have been reticient to talk about themselves or reluctant to have their photos taken. I knew after meeting Jade that wouldn’t be the case: she’s chatty, full of stories, photogenic and loves to talk chicken. She’s a bit of a dream subject. Usually I let folks tell their stories and guide them a bit. I knew I’d have to have more structure with Jade just so I could keep track of all her adventures.

Both Jade and her husband Taylor are from British Columbia. They met thirteen years ago in Victoria when he was going to university for a B.Sc. in Physical Geography. Jade had taken courses in Fashion Design and trained in silk screening, selling her work at local markets.

Five years later, they had the opportunity to relocate to Calgary for Taylor’s job as a Hydrometric Technologist. While there, Jade became a dog groomer.

She had taken art classes in high school: oil painting, live and figure drawing, but is largely self-taught. She hung one of her large pieces featuring her dog in the grooming salon, which sparked a lot of interest. It wasn’t long before she was taking commissions and the art eclipsed the dog-grooming job and she was able to make the transition to full-time professional artist.

Taylor was working for Environment Canada doing fresh water resource management when, in 2013, an opportunity came up for them to relocate to Newfoundland. Being ocean lovers they seized the chance and ended up in a rural area thirty minutes outside of St Johns. Real estate is much more affordable on the east coast so they were able to buy an oceanfront house on 1½ acres. A year later they had their first child, daughter Fife.

While Taylor was working measuring water flow, Jade was a stay-at-home mum, engaged in her art and building a homestead. Two years later, when son Oscar was a newborn, Jade was driving around the back roads during one of the local spring and fall clean up days where folks put out their unwanted, but salvageable, household goods. While the baby slept in the vehicle Jade managed to score five loads of building materials, doors and windows, which took her the better part of the day. She passed it all on to Taylor, requesting that he build a chicken coop. They got their first twelve birds from their neighbour, naming all of them after various kinds of wine or cheese. Ducks and geese followed.

Seven years and two kids later, they loved being on the East Coast but also missed family and wanted Fife and Oscar to be raised near them. Another transfer, brought the family back out to the west coast. Jade flew with the kids and two geese while Taylor and his dad drove across the country hauling a trailer with the bare essentials, accompanied by their Golden Retriever x Great Pyrenees, Moose. Sadly, their Landseer, Bison, died shortly before they left.

They had to rehome most of their livestock: the 50 chickens went to one home and the three ducks to another. The two geese were pets and bonded with the kids so they moved with them. For two weeks the family stayed with Jade’s mother in Vernon waiting for Taylor to arrive. The geese camped out in a temporary shelter in the backyard.

Six months after they arrived Moose died of cancer. Jade’s favourite goose, Henryetti, had to be euthanized just last week due to on-going complications from a chronic infection. They’ve adopted two cats and a rescue Husky. If you know anything about dogs and chickens, huskies are reputed to have a strong prey drive and are considered chicken killers. At nine months old, Oxen, had proven to be trustworthy with the birds and a good guardian against predators. They’ve already had to deal with more than their fair share of raccoons.

The local real estate market is tight, but they were fortunate to buy when they did. They’d love to have more land to expand their homestead but what they found was a half-acre with a house, a large garage and studio above for Jade’s business. Moving cross country has meant they’ve had to start from scratch, but they feel like it’s been worth it.

“I love the plot we have, making use of the pond by filling it with water birds and feel very lucky to have the studio space. We’re literally working from the ground up, adjusting to our new surroundings and still be us.” – Jade

The back part of their lot has run-off to a natural pond, which is great for their four Chinese White x Toulouse geese and many ducks. Muscovies are being raised for eggs and meat. They’ve built the kids swings and balance beams back there so when Jade’s farming, they’re able to be with her. The kids are integrated into the homestead and love their animals.

True to form, Jade scrounged recycled materials and Taylor built separate accommodation for the birds. The geese and ducks have adjoining houses with lots of light coming through salvaged louvered windows. On the other property line the chickens have their own coop, again made with reclaimed windows and doors. The pen gate was once Taylor’s parents’ old garden gate. Luckily their neighbours on both sides enjoy the birds and they’ve had no complaints.

Like many people, getting chickens and establishing a homestead was their Covid project when they were forced to spend so much time at home. The flock consists of a Black Copper Marans rooster, and 12 hens: Blue Copper Marans, a cross beaked Salmon Faverolle, Rhode Island Red, Plymouth Rock, Easter Eggers and four White Leghorns, all named Feta by seven year old Fife. Her rationale for giving them all the same name is they’ll always have a Feta if one gets eaten.

One of Fife’s show-and-tell projects when she was in kindergarten was to talk about chickens to her class. She had a plastic model of chicken anatomy and brought some real duck and chickens eggs. Her classmates were horrified when she explained that they eat the eggs that don’t hatch and when their chicks get older they eat some of them too. After Fife gave them a lesson in where chicken comes from (and not just the grocery store) they conceded that they liked to eat chicken too.

Jade’s specialty is depicting animals of every description: her own chickens and dogs, wild birds, whales, hares and owls. She uses a variety of techniques: tea staining, watercolours, pen and ink and charcoal – all in one piece. The work is done on paper and then mounted on canvas to give it structure.

She’s passionate about using her art to raise awareness in support of animal adoption. Jade works closely with several animal rescue organizations across Canada. The relationships that she’s developed with them have turned out to be mutually beneficial. Donated artwork for silent auctions and fundraisers and the sale of her ‘Smile Dog’ calendars have supported the work of the Alberta Spay and Neuter Task Force. In turn, the exposure of her work has increased custom orders to the point where it’s now her primary income.

Moving from one coast to another has meant not only packing up the family, but also her business. Like many artists, Jade has been impacted by Covid 19. Her participation in several pet expos and craft fairs has been cancelled. Fortunately the bulk of her work is commissions from people wanting portraits of their pets and the finished pieces can be shipped.

Her work is incredibly versatile and she’s got a knack for marketing. There are large-scale animal portraits, cards, coasters, calendars and silk-screened cushions. Recently Jade has developed a technique of printing transfers of her art and applying them to teacups filled with custom made scented candles. Her art also features on charcuterie boards made by Taylor from live-edge salvaged wood with cast iron handles.

I have a feeling that over the next few years both her art practice and backyard homestead will continue to grow. When Jade said she would love to have goats it wouldn’t surprise me if the family ended up on acreage in a few years time. I’ll have to keep in touch with them to see if my prediction comes to fruition.

3 comments on “Jade: Artist For Animals”