You know the old adage: An ounce of prevention is worth a pound of cure. It’s better to understand what potential predators are in your area, how they behave and figure out ways to thwart them before  they cause any harm. If you’ve already experienced a loss take a look at my Predator Detective article which might help you identity what species you’re dealing with.

Unless you are prepared to fortify your coop and run like Fort Knox you may not be able to predator proof your birds entirely. Whether you plan to free range or pen your birds your aim will be how to minimize your losses.

If you want to free-range: consider restricting the times they’re out to when you are home/can intervene in case of an attack; when predators are least likely to be around; provide plenty of places they can hide and get a rooster. Not all roosters are going to lay their lives on the line for their girls, but they should be good at sounding the alarm.

For years I had a Japanese Bantam rooster in a flock of mostly standard sized hens. Isaac, was great at alerting the flock to hawks, but he was also the first one back in the coop. He knew he was a pint-sized target, but at least he got my attention, as well as his girls’.

The first two years I had chickens my coop was predator-proof and they were totally free ranging. I lost two to hawks and two others had encounters with dogs, but survived. I loved seeing my birds in the forest and running to greet me as my car pulled up in the driveway. They ‘helped’ in the garden and didn’t have issues with parasites because they weren’t housed on the same soil that might have harboured worm eggs.

The downside of free ranging for me had little to do with predators: they laid their eggs in the woods (I once came upon two nests of over 20 eggs/each), in our carpenter’s tool belt and on the welcome mat; they hung out at the back door when it rained and pooped on our porch (I live in a temperate rain forest so that was most of the year); they flew over the gate and got into the garden. The end of their freedom came after they wandered over the property line and into the neighbours’ garden.

I took a hiatus from keeping chickens for a couple of years and decided the next flock would be penned. I live on 4 ½ acres and the most obvious spot due to ease, not location, was across the driveway directly in front of the house. There was an untreed area suitable for a coop and pen. I purchased a used 4’x4’ raised coop from an online classified ad that came with an attached 4’x8’ run. I bought 4 pullets and thought 48 sq.ft. of run would be fine. What I didn’t factor in was that even though I could walk in the small pen, essentially my birds were in a cage and I sat outside to watch them. I wanted more interaction. Plan B: make as big a pen as space and finances would allow. We had some WWOOFers who dug all the fence post holes for a 30’x40’ run and I hired someone to build the pen with a three-sided tool/supply shed in one corner. When finished, the coop and run sat inside the fenced pen. It just so happened that I had already planted four apple and pear trees and didn’t want to move them, so there was already some cover for them.

I’m lucky that the list of my potential predators is short: raccoons, dogs, mink and hawks. Cost was a factor so I used 6’ high deer/rabbit fencing (larger squares at the top, decreasing in size to very small at the bottom). I wasn’t planning on enclosing the top (the fruit trees made it difficult), so it didn’t make sense to go overboard using smaller, and more expensive, mesh since raccoons or mink would be able to get in through the top. For the most part it’s worked. In almost eight years I’ve had four losses: all from hawks. I had one daylight encounter with a raccoon who climbed through the fence and injured a hen. She recovered and I never saw the raccoon again.

One of those four pullets went broody the following year and I kept 4 of her daughters. A couple of years later, I had adopted more birds and wanted more space. Now I have the Taj Mahal of coops. It’s only 13’ x 8’ – any bigger and a building permit would have been required. I love it, but it wasn’t cheap. I wanted to use recycled materials and build on a budget, but I hired builders who had great ideas. Their philosophy must be ‘go big or go home’ because I ended up with something that’s significantly nicer than my original plans. We did however use salvaged windows, trusses, door, hardware and insulation.

Here are some of the highlights from my set up:

Concrete floor and foundation: I never have to worry about critters digging or chewing to get in. It’s also really easy to clean and doesn’t harbour parasites. If you can afford it I’d highly recommend it. 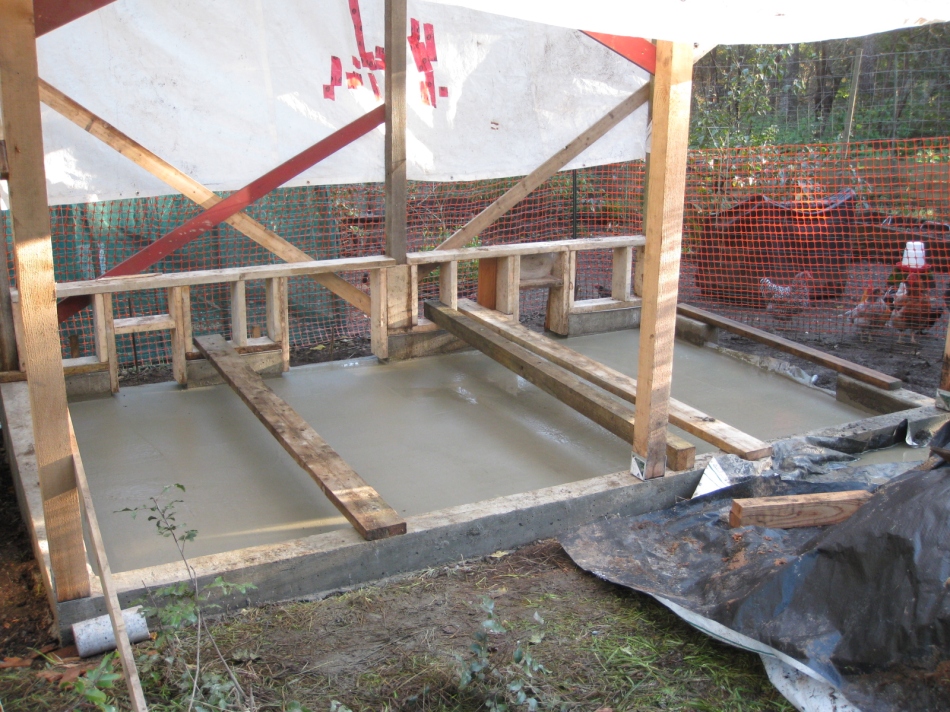 If you don’t have a concrete foundation a raised coop with a solid plywood floor, covered in linoleum is sufficient. Some people dig a 12” perimeter trench around the run and bury hardware cloth to deter digging predators. Be careful about installing wire on the floor of your run, even if you think it is well buried, because chickens love to dig and it can lead to bumblefoot . 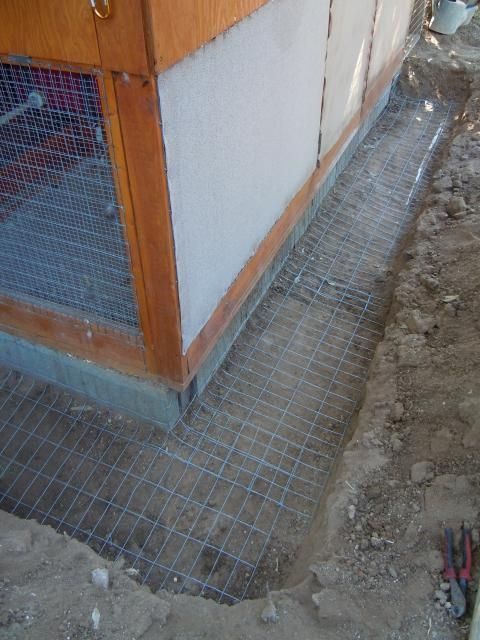 I salvaged some 1940’s windows from my house renovation, as well as others from the local recycling centre. All the windows are opening with predator wire attached on the inside. Window screens can be torn or pushed in. I have a sliding glass barn-style sliding door that no animal can open. All gates have 2-step locking latches. 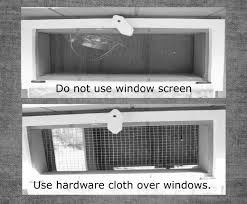 No holes: The exterior is cedar and the interior is plywood. The vents and opening porthole are all wired. Chicken wire is meant to keep chickens in – it will not stand up to many predators.

To mitigate the hawk damage I started to put structures in the pen to give my birds places to hide. The fruit trees are now about 10 years old, which also provide both shade and shelter. This area is tarped and stays dry year round which is an ideal place for them to dustbath.

I’ve experimented with overhead netting and have now netted the whole top. Smaller mesh is hard to manage and pulls down easily when it snows (good thing we rarely get much snow). I’ve switched to using heavy-duty plastic deer netting with 2”x 2” squares which is able to withstand the snow and keeps out aerial predators. I found a 10’x 20’ car canopy structure in the free pile at a garage sale. I’ve tarped part of it and strung the netting from one side of the pen to the other going over the canopy so I don’t have to duck to walk around. 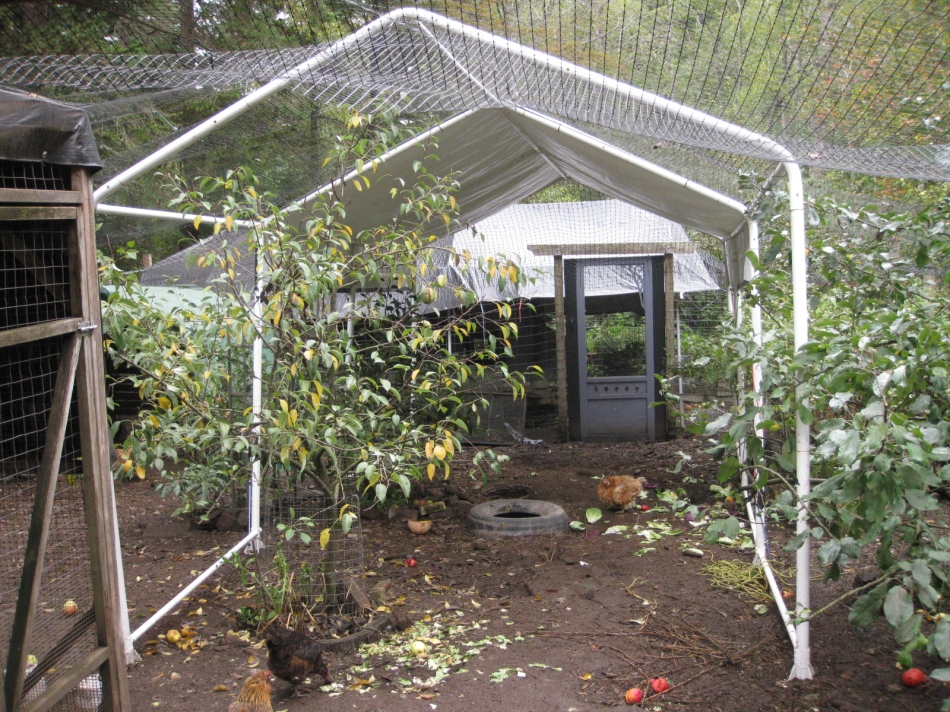 My flock is pretty consistent about getting back to the coop before dusk. Sometimes new birds or teenagers dawdle. For peace of mind, install an automatic door. Mine is battery operated with a solar sensor and I’ve never had an issue with it. In the winter I leave for, and get home from, work when it’s still dark and the chickens are in bed. At that time of year the door opens and closes when I’m not there. I still go out every night to ensure everyone made it in safely. 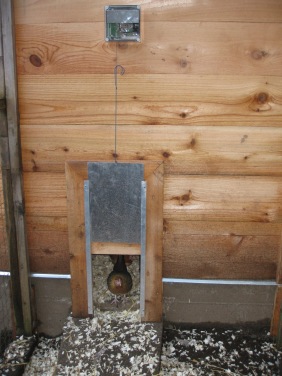 Some people don’t seem to mind if their birds sleep out in the trees or in the run. I think it’s asking for trouble. There are many nocturnal predators who’d love a chicken meal when your bird is not on high alert. Train your birds to get back to the coop by dusk. If necessary, physically carry them back until they consistently do it on their own.

It’s not possible when I’m working, but when I’m not I collect eggs often. This discourages potential egg thieves, but also decreases the chance that eggs get broken inadvertently by hens scrapping for space in the nest box. You’ll also want to minimize opportunities for egg eating by your own birds.

I keep feed secure in locking containers. These plastic green bins are provided for free by the municipality for compost collection and make ideal feed containers: they lock, have a handle, are on casters and each one can hold just over one bag of layer pellets. My main compost bin is away from the chickens so as not to attract animals.

Some people have Livestock Guardian Dogs, I have a Standard Poodle. She’s got ¼ acre fenced area at the side and back of the house. Lola’s not outside after dark and doesn’t interact with the chickens, but just being there deters some predators. I took her out to pee after dark last week and we treed a raccoon. I see them so rarely that I’m surprised when I do. Most of my neighbours have one, if not two, dogs so their collective presence is likely to make predators wary. Alpacas, llamas, donkeys, geese and guinea fowl are also recommended to protect livestock.

Just to note, a well-trained dog is a great protector, but one who isn’t can wreak havoc on your flock. Make sure dogs – your own, or neighbours – are chicken savvy and totally trustworthy before allowing them near your birds. Dogs rank high on the predator list.

Here’s some other ideas I haven’t tried:

Install a motion-sensor-activated flood light, which will keep most nocturnal predators away from the coop. If you don’t have electricity at your coop you can get solar-powered lights.

Install a game camera to monitor what goes on inside, and outside, your coop when you’re not there. 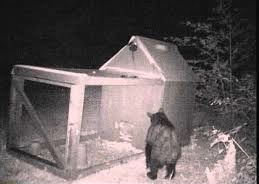 Some people swear that playing a radio on in their coop keeps some predators away.

Other people tie crisscrossing string across the top of their pen and attach CDs, which when moving about are supposed to deter birds, like ravens.

I don’t have large predators in my area, but for those that do installing electric fencing should keep most predators – okay maybe not the big (and determined) ones like bear or lynx.

Put saddles on your hens with ‘eyes’ that may scare off aerial predators.

Doing everything we can to co-exist with wildlife should be our first option. Killing or trapping wildlife, our last. Okay, this opossum snacking alongside these birds might be a bit too close for comfort, but clearly it’s actions didn’t alarm the chickens. Their owner intended to trap the intruder and gently move it along to new territory. Before killing, trapping or relocating wildlife check what the regulations in your area allow.

With some commitment and ingenuity we can keep our chickens safer and still live with wildlife.