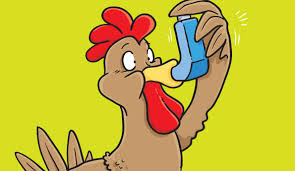 What do you know about your chicken’s respiratory system? If you’re like me, probably not much. I know a bit more after doing research for this piece and I hope you’ll learn something by reading it.

Respiratory diseases are the most common cause of death in small poultry flocks. I belong to a number of Facebook farm groups and regularly see posts asking for help with sick chickens, their owners not knowing how to diagnose or treat them. Understanding your birds’ anatomy and physiology is essential for developing a health monitoring plan, recognizing symptoms and knowing how to treat them.

Your chickens’ respiratory systems are involved in:

Understanding chicken anatomy will help you figure out how their bodies function and what might go wrong.

Parts of the Chicken Respiratory System

Like humans, birds have nasal openings, mouth, windpipe and two lungs, but from there birds and mammals are different.

Bird lungs contain parabronchi: tubes that allow air to pass through two small, non-expanding lungs and then into nine air sacs.  Bird lungs are different from mammals that contain many bronchi that lead to small sacs (alveoli) which have only one opening, so that air flows into and out of them, but not through it to the outside of the lung. In comparison, air passes through a bird’s lungs only in one direction.

The parabronchi, laced with blood capillaries, are where gas exchange occurs.

The air sacs, which fill a large proportion of the chest and abdominal cavity of a bird, are balloon-like structures at the ends of the airway system. This part of their anatomy is unique to birds and some species of reptiles.

The key to the avian respiratory system is that air moves in and out through expansion and contraction of the air sacs, not the lungs. They act as bellows to suck air in, blow it out and, even, to hold some of it. Air is constantly flowing into, and out of, the lungs, with some remaining in the air sacs.

The air sacs, arranged around the inside of the chest and abdomen, are connected with some of the bones of the skeleton. Birds have hollow bones which are connected to air sacs in its lungs, allowing them to function as part of the respiratory system. These pneumatic bones include the skull, humerus, clavicle, keel, pelvis, and lumbar and sacral vertebrae. If one of these breaks it can impair breathing.

Humans breathe with the help of the diaphragm muscle, which divides the chest and abdominal cavities. Birds don’t have a working diaphragm; instead, they move their rib cage and breastbone to draw air into the lungs and force it back out.

The voice box in chickens is called the syrinx, located down in the chest cavity where the windpipe splits to enter each lung. Both male and female chickens have them, so hens can, and sometimes do, crow. Don’t think about removing your rooster’s syrinx to stop him from crowing – it’s an essential piece of their anatomy and they can’t live without it.

Chicken and human hearts are similar in that they have four chambers and pump blood through two loops: one through the lungs and the other through the rest of the body. A bird’s heart is relatively large for its body size, compared to mammal hearts.

Threats to the Chicken Respiratory System

Those three components work together: cilia, tiny hairlike structures in the trachea, propel trapped particles for disposal; mucus, produced in the trachea, help cilia function. If the mucus is too thick the cilia can’t do their job. Scavenging cells in the lungs actively search for inhaled particles and bacteria that enter the lower respiratory tract and kill them, preventing their further spread.

The integration of cilia, mucus, and scavenging cells keeps chicken airways free of pathogens. If even one of these components is impaired pathogens can accumulate in the respiratory tract and may result in disease.

These defense mechanisms are important because with each breath, a chicken’s respiratory tract is exposed to the inside environment of a poultry house. Poor hygiene may not directly cause disease, but it does reduce their defenses, making them more susceptible to infection from existing viruses and pathogens. The air inside your coop or barn contains aerosol particles—dust from the floor litter, feed, dried manure, and skin and feathers from the chickens. Dust irritates the respiratory system, causing birds to cough trying to remove it. Excessive coughing lowers a chicken’s resistance to disease and can create blockages in the trachea, affecting their health.

In addition to the aerosol particles in your coop, gases like ammonia are generated by decomposing poop. Even small amounts of ammonia can contribute to increased mucus and damage to the cilia – impairing their ability to clear things like E.coli from their air sacs, lungs, and trachea. If you think your coop smells imagine what it’s like for your birds to live in there.

Set up a regular cleaning schedule and maintain good hygiene practices. We all love our birds, but sometimes end up with more than we can comfortably manage. If that’s the case for you, consider downsizing some of them in order to increase the health of your flock.

Another danger to the chicken respiratory system is unrelated to disease. Because birds don’t have a diaphragm, they depend on movement of the sternum and rib cage to breathe. Holding a bird too tightly restricts that movement of the rib cage and can suffocate it. Always monitor young children who may be too enthusiastic when handling chicks.