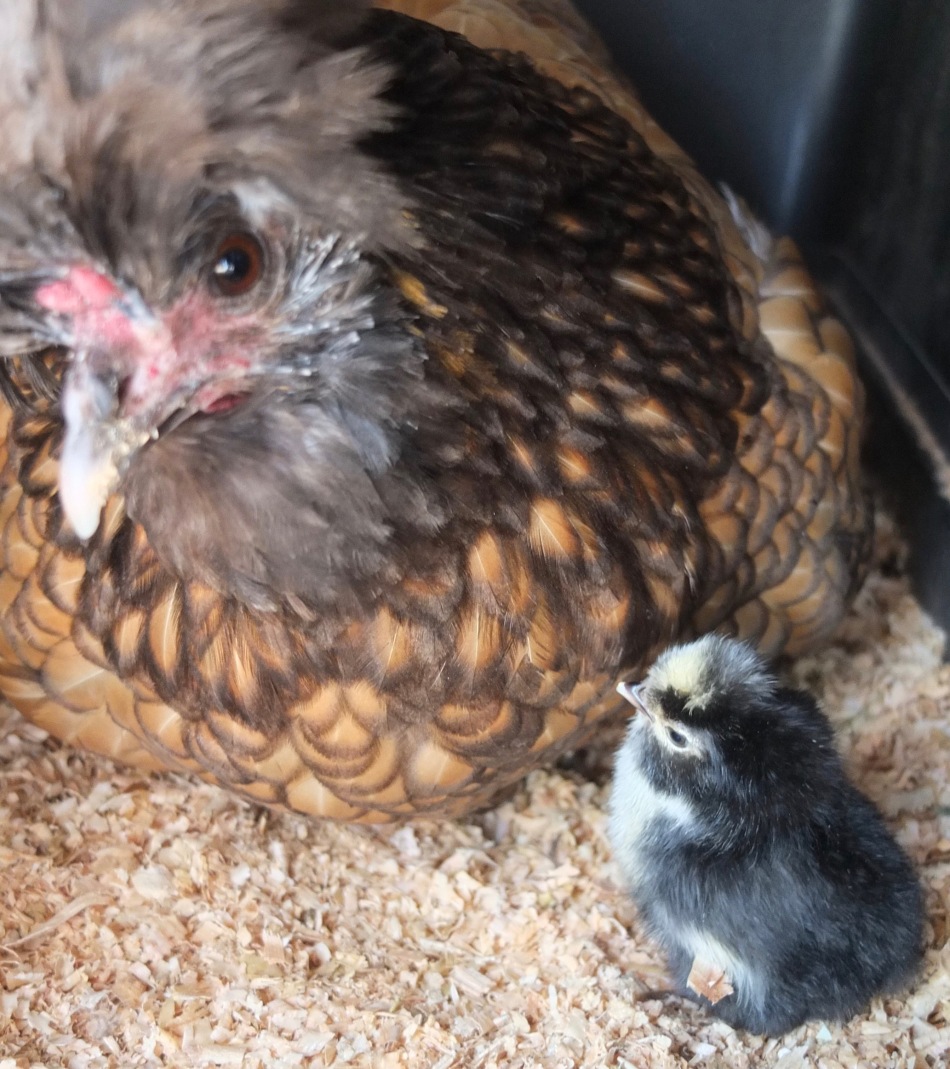 The highlight of my year is having chicks: the anticipation of the hatch, getting to know them and seeing how they develop. That being said, they are a lot of work, even if they are hatched and reared by a hen.

My first year of hatching was in 2012: one hen and eleven chicks. The next year, the same hen went broody and hatched eight more chicks. Somewhere along the way, and as my flock grew, a very strong gene for broodiness was introduced. In the last four years, I have had more than forty broody hens – some that have gone broody twice, or even three times, in a season. 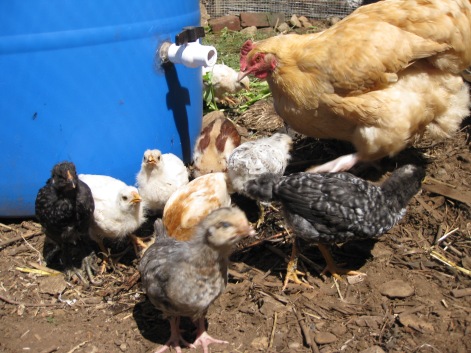 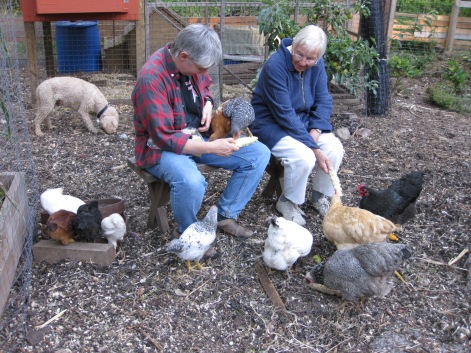 This year, my rooster, Simon, seems to be having some fertility issues. It’s not just that he’s with a lot of hens – typically 25-30 – that’s normal, but the number of unfertilized eggs has increased. So instead of having high hatch rates of ten or twelve chicks, many of my hatches have produced only three or four. I’m not complaining; I don’t need more birds. I let hens hatch to fulfill their innate desire to produce the next generation. The side benefit for me is the fun of having chicks. The thrill never gets old.

After my first hen went broody and I tried to ‘break’ her by dunking her in cool water and putting an ice pack in the nest box – all to no avail –I gave up thinking I will outlast them. Their will for motherhood is stronger than my resolve to deter them. I don’t have production layers and am glad that not every instinct has been bred out of them to satisfy our needs. I hate the term ‘break’. When you see a hen with her chicks you understand how strong that maternal desire is.

This season has been noteworthy in other ways as well. I’ve hatched lots of chicks, but for some reason, I have recently experienced a number of firsts and odd events.

I have assisted several chicks to hatch before: including two cockerels – a bantam and a frizzle – who, when still in the egg, were abandoned by their mothers just before they hatched. This year I’ve assisted a chick to hatch, then reunited him with his mother as well as had Aurora hatch a Naked Neck x chick for Shona who’d gotten up off the nest. 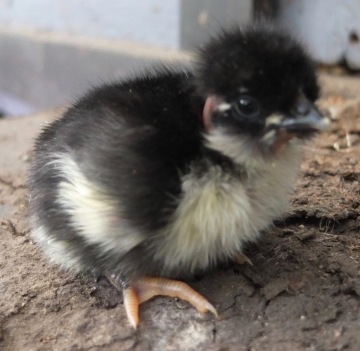 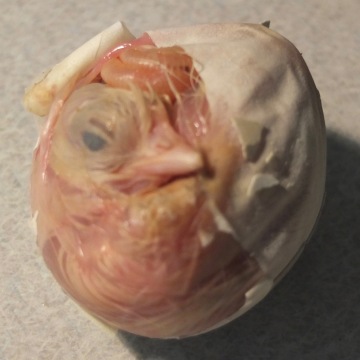 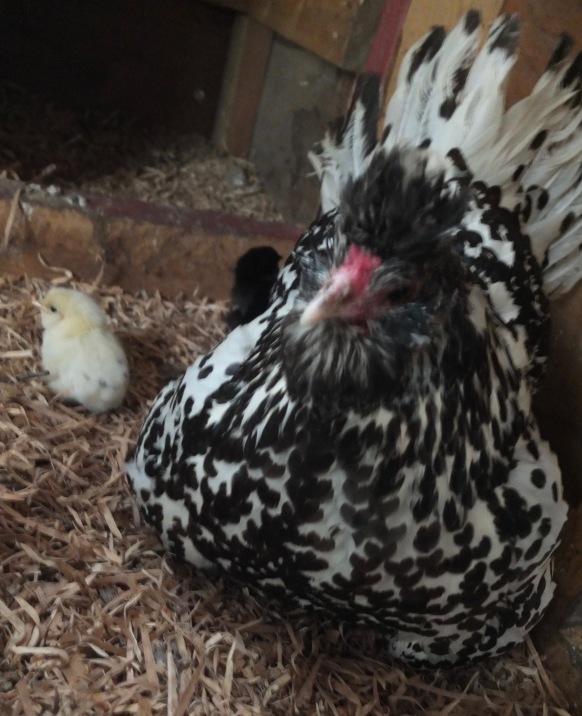 I rarely go out of town: once a year I am away for one, or two, nights for work. This year I was gone for just over a day – right when I was expecting two hatches. When I got back Ginger had hatched three chicks and left the remaining eggs: one chick had externally pipped, but died before making it out of the egg. If I had been home I would have been able to help, and maybe, have saved, it. (All that was showing was its beak. I peeled back some of the shell to see what position the chick was in.) 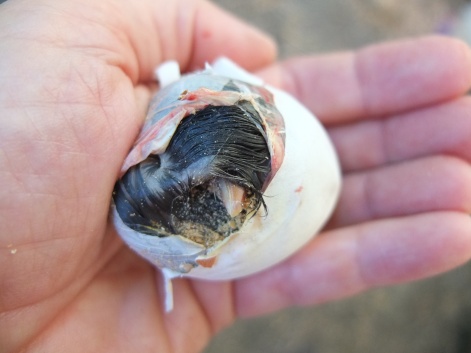 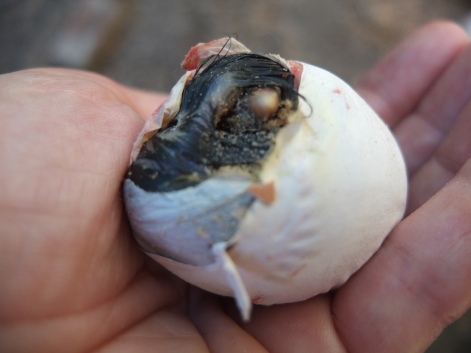 I’ve had hens be half-assed broody and get up off their nests before hatch and had to move another hen in to save them. I even went so far as borrowing a broody hen from my friends Thomas and Elizabeth to save a hatch. It’s starting to feel like it’s been a little like musical chairs at Bitchin’ Chickens trying to accommodate a flock of demanding and fickle hens. 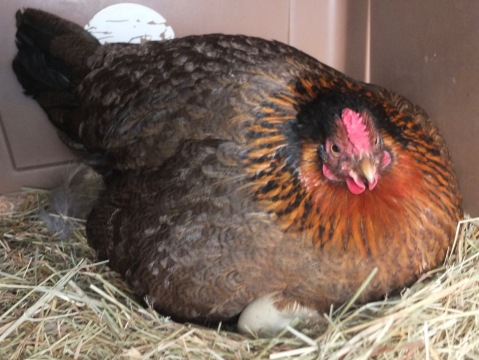 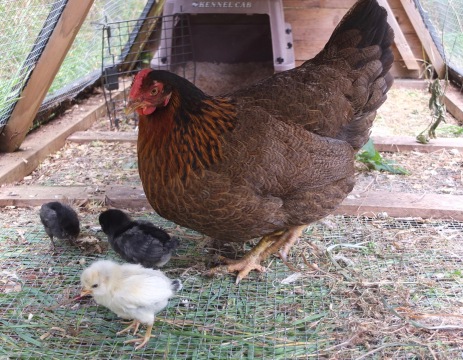 Just as I was moving partially incubated eggs from one broody hen to another (to reduce the time the second hen would have to sit, but still allow her to hatch chicks) Christy called saying her Icelandic hen had gotten up off her nest the day before the eggs were set to hatch. She transferred them to my hen, who hatched all five the next day. One died mysteriously at twelve days old: there was no sign of illness or injury and all its hatch mates were healthy. Sometimes things happen and, frustratingly, we never know why. 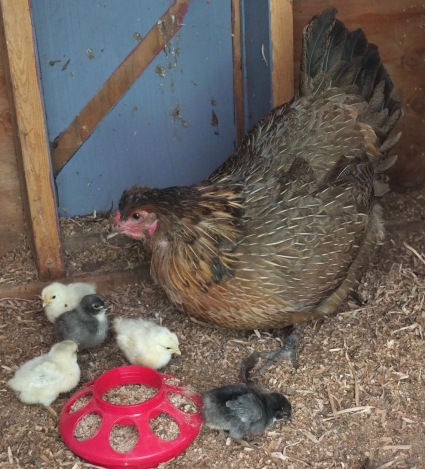 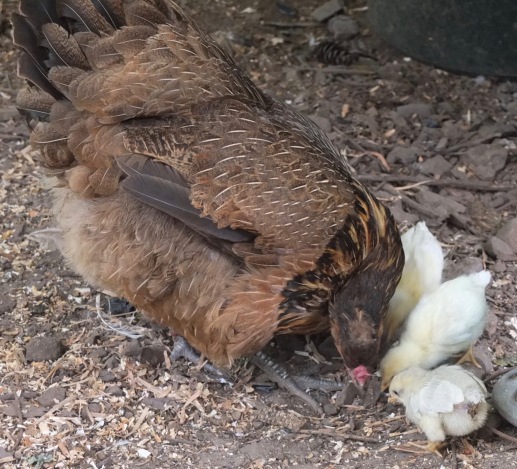 I’ve housed hens with their chicks in shared pens with no issues before. It’s always a gamble whether that goes well or not. I don’t always know which hens might get along or be bossy or overprotective. Aurora and Shona were sharing a 150 square feet pen. They weren’t pals by any means, but everything seemed okay between them. Aurora was clearly dominant and hogged the best areas for her brood, but I have multiple food and water stations to reduce competition. Just as few days before I was going to put them in separate pens I came home to find one of Shona’s five week old sons pecked to death. After eliminating various possibilities I think Aurora, perhaps initially injuring him accidentally if he got between the scrapping hens, had then killed him. I’ve heard of hens killing chicks – usually very young ones – but that was a first for me. 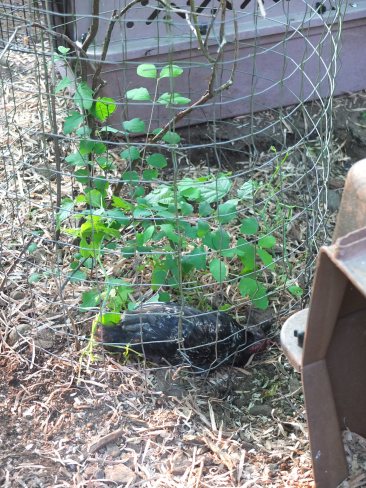 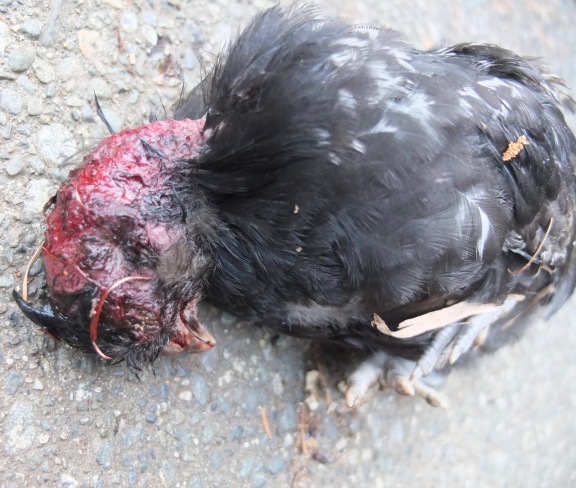 I had two hens in adjacent pens. When their chicks were four weeks old one of the hens, Lucy, started flying over the six foot high fence at night to roost with the second hen, Ginger, and her chicks. For several nights I returned Lucy to her own crate and chicks. Then one night I decided to put them all together. Big mistake. The hens started to squabble, the chicks scattered. I returned the interloping hen and her chicks back to their pen. In checking on Ginger I saw that one of her chicks had been hurt: its eyes were closed, neck flopped. I thought its neck was broken – it was totally limp and unresponsive. Thinking it was dead, I took it to the burial ground in the woods.

I did some chores, came back ten minutes later, ready to deal with the chick. It was just where I left it, lifeless; then, just as I approached, it jumped straight up and bolted into the underbrush. I was totally surprised and had to run get my partner and some nets to rustle it up. It was small, but could really run. I had visions of it, raised from the dead only to be eaten by a predator. We put the mother in a dog crate and set her in an opening in the woods. They talked back and forth and we were finally able to reunite them. Lesson learned: recognize the signs of shock and don’t give up on a bird until they are well and truly dead.

I have had hens inadvertently kill their just hatched chicks by burying them in the nest box shavings, then sitting on them, suffocating them to death. Nefertiti hatched four chicks, but pecked one to death. Upon closer inspection I could see that the chick didn’t look normal. She must have sensed a deformity or disability and dispatched it just after hatch. It’s always sad to see them make it to hatch, only to die. 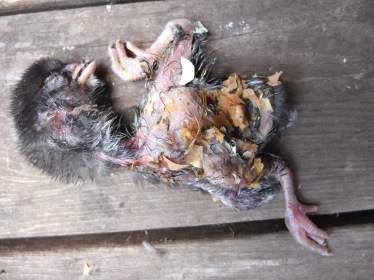 This spring, I donated hatching eggs to two elementary schools. Incubators are often temperamental and difficult to maintain consistent temperature and humidity levels. Those fluctuations can cause birth defects like cross beak, spraddle leg and curled toes. Slippery surfaces in the incubator or brooder can lead to slipped tendon. One of the chicks in the bunch I got back from the school hatch had a slipped Achilles’ tendon. Sadly, I wasn’t able to fix it and had to euthanize the pullet. 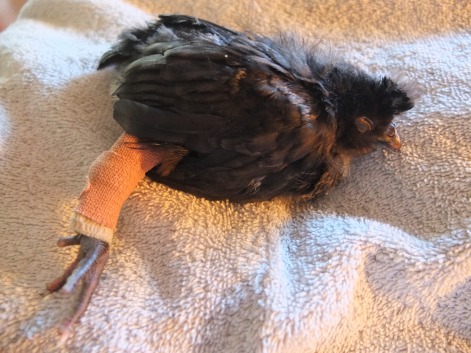 Thomas and Elizabeth had a chick with curled toes. They refer to me as their traveling vet as I made house-calls a couple of times a week helping them with ways to fix her severely curled toes. 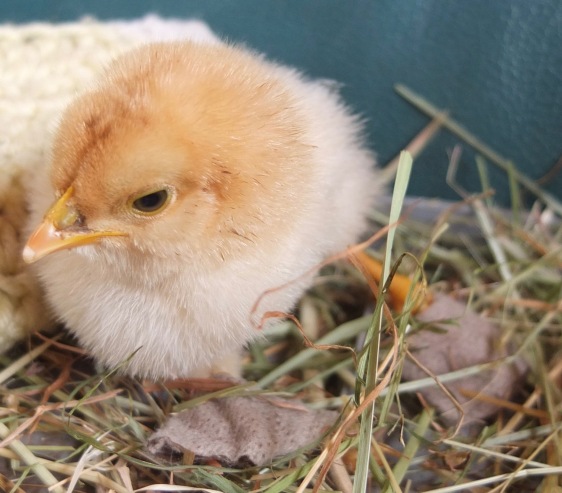 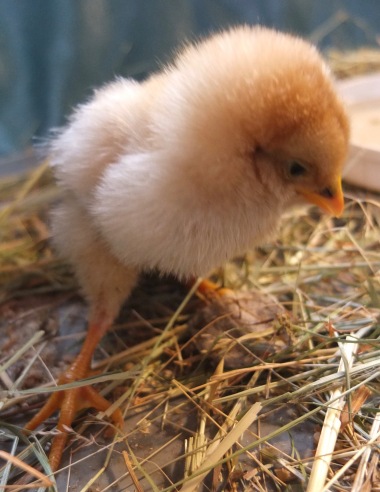 Unfortunately both of our flocks were hit with coccidiosis for the first time this year. I don’t think there was cross contamination, as I’m pretty careful to observe bio-security precautions, like having dedicated coop shoes and washing my hands between handling birds. Sadly, my curled toe patient and one of my school incubator hatched chicks died before we realized they were infected and started them on a course of Amprolium to kill the coccidia. 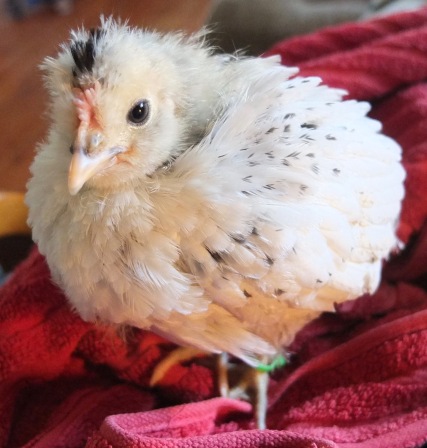 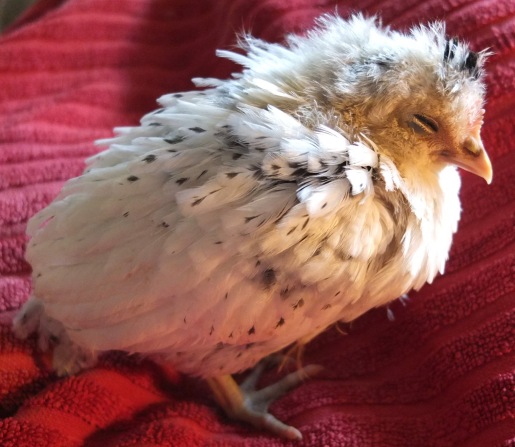 I’m always careful with food and water containers. Small chicks can drown in a shallow bowl or get trapped under food dishes. I’ve heard of full-grown birds getting stuck under inverted buckets and dying. I use waterers and feeders designed for chicks. I had a chick go missing once and looked everywhere to no avail. When cleaning up I lifted an overturned stainless steel bowl and there was the chick, still alive.

I have a couple of heavy ceramic bowls for the bigger chicks. I was out with my birds at noon and all was well. Later, when locking them up I picked up an upside-down pottery bowl, and there, to my surprise, was a big six-week old cockerel curled in a ball, who had been trapped underneath and suffocated. I felt terrible because I thought they were safe. The bowl was on a slight incline and the chicks must have stood on the lip, turning it over and trapping one underneath. It was a freak accident and probably won’t (I hope) happen again.

I have two frizzled hens, but haven’t been able to hatch any frizzled chicks this year. My friend Tracy gave me ten eggs – mostly from frizzles, originally from my stock. They are being incubated by one of my hens: hatch day is in one week. I’ve also got one more broody hen, Mercedes, that is hoping I’ll let her have chicks. I plan to give her some of the partially incubated frizzles as I definitely don’t need any more chicks.

This hatching season is drawing to a close. I sold 26 straight-run chicks early in the season. As they get older, and their sex is easier to determine, it becomes more difficult to find folks interested in cockerels. I currently have 37 chicks, ranging in age from one week to almost four months old.

Statistically, over time, hatches are usually comprised of equal numbers of cockerels and pullets. For two successive years, I had more pullets than cockerels. Yahoo – everyone, including me, is looking for hens. I’m calling this season, the year of the rooster: I think that at least two-thirds of my current chicks are cockerels. Boo, no one is clambering for boys.

In previous years, I’ve drafted some snappy ads, taken some photos of the beautiful cockerels and Bob’s your uncle, found them forever homes with flocks of their own. No matter what I’ve tried I haven’t found folks interested in these guys. No disputing they are beautiful, but no one is volunteering to take them. I don’t eat my own birds so it looks like  they’ll be headed to Thomas and Elizabeth’s, who will humanely butcher, and happily, eat them. Having too many cockerels is one of the downsides of hatching. 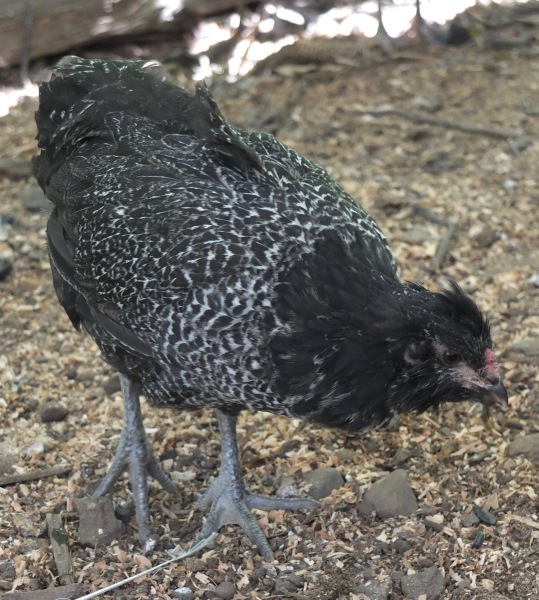 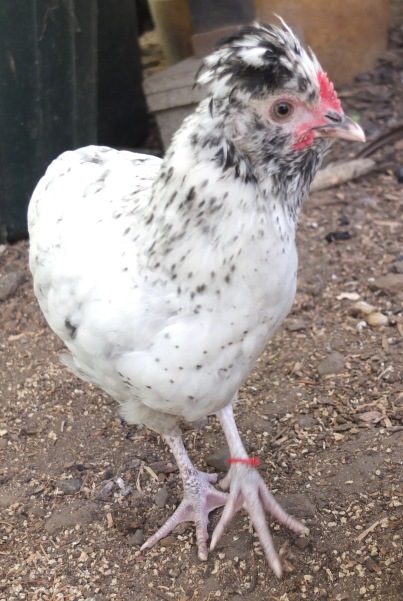 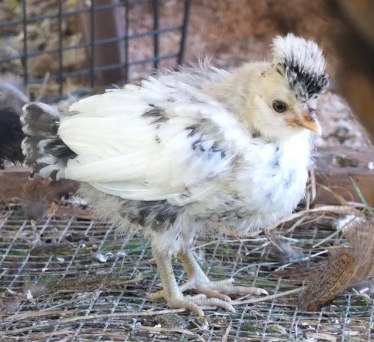 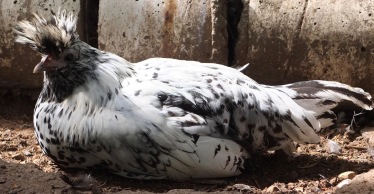 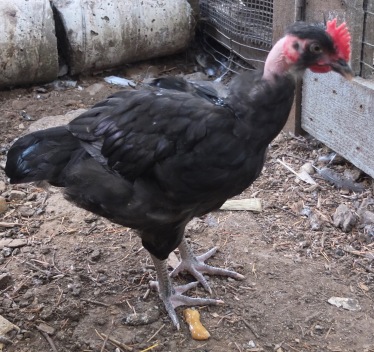 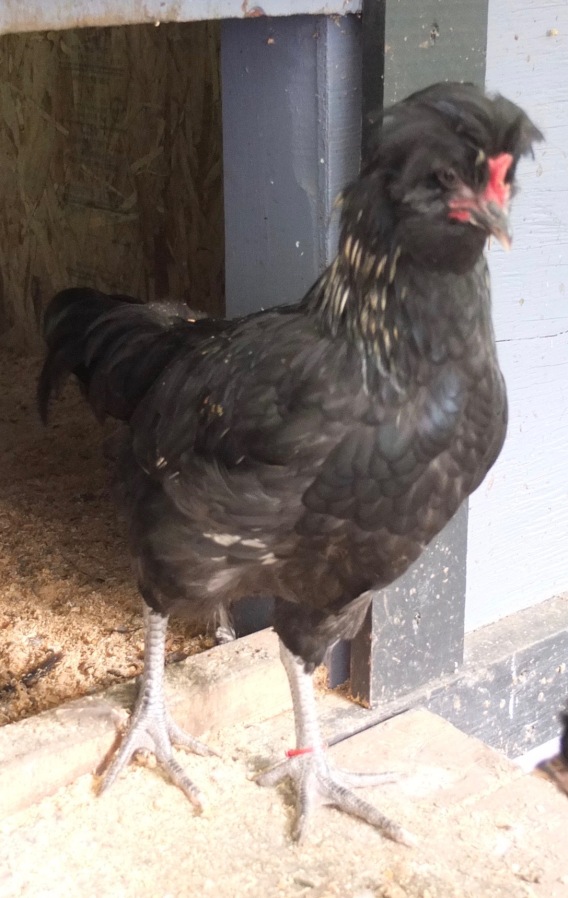 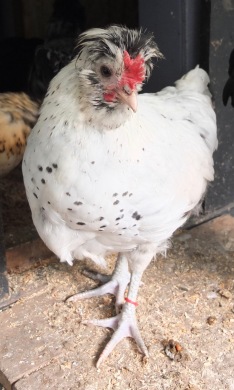 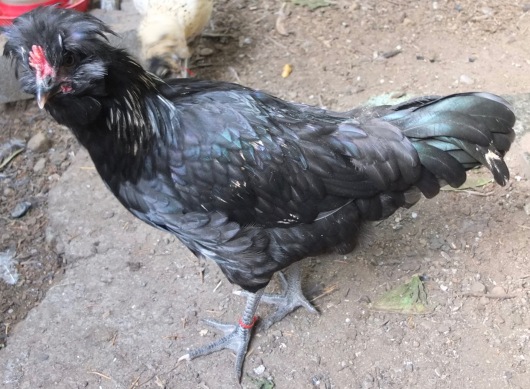 The end of the season is bittersweet: the fluffy littles are growing up and going through their teenage stage: some of them will go off to new homes, some I’ll keep. I’ll miss them, but I won’t miss the commitment of time and energy it takes to manage multiple broody hens: monitoring hatches (and stepping in to help, if needed), cleaning, feeding, dealing with predators, juggling accommodation. I won’t miss the emergencies, illness and unfortunate losses. And I won’t miss the frustration and sadness I feel at not finding homes for my boys.

0 comments on “The Trials & Tribulations of Raising Chicks”