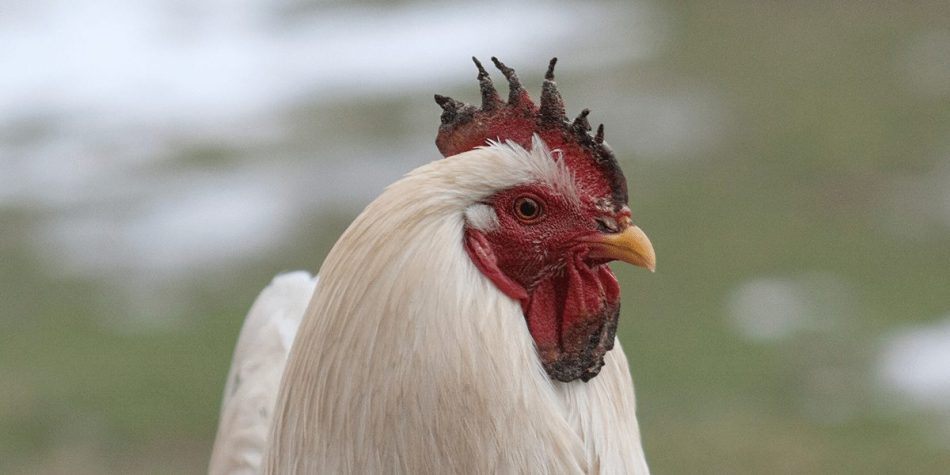 Frostbite is an injury to skin and underlying tissues caused by freezing, often in windy and damp conditions. The skin becomes very cold and red, then numb, hard and pale. In people, it most commonly affects our extremities: fingers, toes, nose, ears, cheeks and chin. Unlike people, chickens can’t wear winter apparel like hats and boots so their exposed combs, wattles, fleshy parts of the face, legs and feet are vulnerable.

In conditions of prolonged cold exposure, the body signals blood vessels in the extremities (the areas farthest from the heart) to narrow. Slowing blood flow to the skin means more blood is sent to the vital organs, supplying them with critical nutrients and oxygen. It also prevents a further decrease in internal body temperature by exposing less blood to the outside cold.

As the extremities become colder, blood vessels are dilated (widened), then constricted again. This process of rotating constriction and dilation allows the extremities to function for as long as possible. When the body is threatened by hypothermia (in chickens: when their temperature drops significantly below 41c/105f), the blood vessels permanently constrict in order to prevent them from returning cold blood to the internal organs. That signals the beginning of frostbite.

In the first stage, ice crystals form around the outside of cell walls. Water is lost from the cell’s interior and dehydration causes cell death.

Upon rewarming, the blood flows through veins also injured by the cold. Holes appear in vessel walls and blood leaks out into the tissues. Blood flow is impeded and small clots form in the tiny vessels of the extremities. Complications due to issues with blood flow create inflammation and further tissue damage.

Cell death happens both at the time of exposure and later due to a lack of oxygen.

I’m not sure why some folks think that chickens ‘don’t feel pain’ like mammals. Of course they do, but as prey animals they have evolved the ability to hide it and appear stoical. These are the symptoms of frostbite in people, and I have no doubt that it affects birds similarly: prickling, numbness, blisters, joint and muscle stiffness.

0 comments on “Dealing With Frostbite In Chickens”