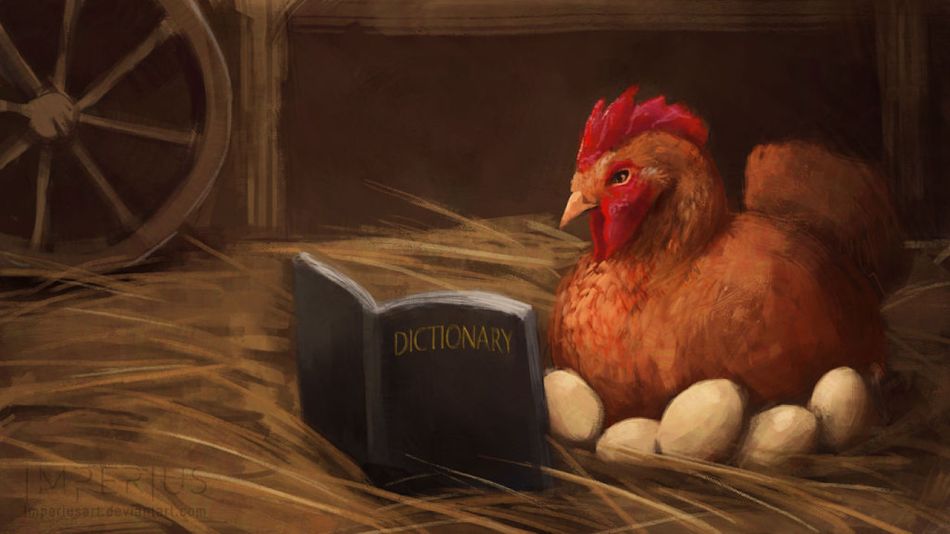 I’ve spent many hours scrolling through online chicken sites and am sometimes confused by what the poster is trying to convey. Reading text typed on a cell phone or mangled by autocorrect is a bit of a challenge, and then there are issues arising from genuine lack of understanding of those terms.

I see a thread running through those groups involving a handful of words. I love language and the origins of words, so this is an exercise in sharing that interest and not a chastisement over correct grammar.

Americana: There’s no recognized breed with this name; it’s a sly hatchery term to market Easter Eggers, which may, or may not, lay coloured eggs. If you’re looking for blue egg layers, then find Ameracaunas (no ‘i’) from a reputable breeder that understands egg shell colour genetics and is not trying to pass off their birds as something else.

Chicken vs rooster: I’ve seen many posts refer to female birds as chickens and males as roosters. All of them are chickens, regardless of sex. The terms for sex include pullet (pre-laying female), hen, cockerel (immature male), rooster or cock.

Cloaca: This is the opening at the end of the digestive and reproductive tracts that is commonly referred to as a vent. It’s the place from which poop is excreted, eggs are laid and mating takes place. (Pronounced: klo-AYE-kah).

Coccidia vs coccidiosis: Coccidiosis is an intestinal disease caused by a microscopic parasitic protozoa, coccidia, which attaches itself to the intestinal lining of a chicken. There are six different species, some harmless and others life threatening, each living in a specific area of the gut. They damage the tissue causing bleeding (hence the bloody poop) and prevent birds from absorbing nutrients. Chickens of all ages can become infected but most vulnerable are chicks under six months because they haven’t built immunity against it. A bird can be a host for coccidia without having coccidiosis (i.e. the parasite load is such that it isn’t causing damage to the chicken). FYI: words ending with ‘osis’ refer to a pathological state.

Comb: The fleshy bits extending from the top of the beak towards the top of the head are referred to as a comb, in both hens and roosters. Some folks refer to it as ‘cone’ or ‘crown’, but the correct term is comb. There are nine recognized types of combs as well as hybrid or duplex combs.

Crest: We’re all familiar with birds that have upright feathers on the top of their head. Although one might be tempted to call it a crown or a topknot or a pouff, the correct term is crest.

Epsom: Lots of us who have dealt with bumblefoot or an egg bound hen have soaked our birds in a warm bath with Epsom salts. Although referred to as a salt, it contains magnesium rather than sodium like table salt and is used to decrease inflammation and to draw out infection. Epsom, with an ‘m’ not an ‘n’ (i.e. epson) is always capitalized as it is named after Epsom, England where it was discovered.

Hair: Some folks use this term to describe their birds’ feathers. Both hair and feathers are made of keratin, a type of protein, but only mammals have hair and only birds have feathers.

ISA Brown: These are a sex-linked hybrid developed as a high production layer by the ‘Institut de Selection Animale’, in 1978. Because ISA is an acronym it is always capitalized.

Marans: If you’re looking for a dark brown egg layer then find yourself a Marans, who produce some of the darkest shades of brown. I’ve been lucky to have had both purebred Wheaten and Blue Copper, as well as a Black Copper Marans cross. This one is a bit confusing because folks are tempted to only use the ‘s’ when referring to a number of birds, but the ‘s’ doesn’t denote a plural. The breed is named after Marans, France so the name is always capitalized and contains the ‘s’ and because it’s French the ‘s’ is silent (i.e. pronounced ma-rahn)

Nare: If you’ve never heard someone say a word you have to imagine how it is supposed to be pronounced. Until recently I assumed nare, which refers to a bird’s nostrils, was pronounced as though it rhymed with ‘hair’ and that the plural form – nares – must obviously rhyme with ‘hairs’. Turns out I was half right. When referring to a single nostril the term nare is pronounced nair. But the plural is a bit trickier. I spent some time with Avian Vet/Pathologist Vicki Bowes recently and when I heard her say nair-eez (i.e nostrils) I asked her to repeat it so I could get the pronunciation down pat.

Nose: I often see folks refer to their chicken’s nose. Birds don’t have a nose; they’ve got a beak.

Orpington: Here’s another confusing place name. I often see it spelled Orphington and wonder if folks pronounce the ‘h’ or not. There is no ‘h’, silent or not, and the breed is pronounced Orp-ING-ton.

Uropygial Gland: If you’re unsure how to pronounce a word you can search google for sites that provide the audio pronunciation. I did that for the word ‘uropygial’ and checked on three different sites. Guess what? I found three different ways to say it and I’m still not sure which is the correct version, but I’m going with this one: euro-pidge-ee-al. Better yet, when in doubt just say preening gland to be on the safe side.

Wattle: This refers to the fleshy bits hanging under a chicken’s chin. It is often erroneously called a ‘waddle’, which is a term used to refer to the way ducks walk or sometimes a sick chicken (i.e. slow gait, swaying side to side).

If you’ve got some tricky terms that you think should be added to the list, leave them in the comments section below and I’d be happy to do so.