They say it takes a village to raise a child, but how many hens does it take to hatch just one clutch of eggs? In this case, apparently it’s a communal effort shared by three broody hens. Not concurrently, because that would be too easy. My birds like to make me work.

If it wasn’t enough that I had played musical chairs with five broody hens in May and June, I had a couple more go broody a few weeks later – or so, I thought. They were what I affectionately call ‘half-ass broody’ – not really sure what they want to do. Most of the time, once given eggs, they settle and sit without issue.

It started with Spot, an Appenzeller Spitzhauben x Easter Egger, born last summer. She thought she’d dip her toe in the broody waters so prevalent at Bitchin’ Chickens. After sitting in the nest box for a couple of days I moved her to a dog crate with eleven eggs. She was fine sitting when the crate door was closed, but when open she seemed to get on and off the eggs several times every day and agitated to go out. On day 8 I let her out in the yard to dust bath. She was happy as a clam and seemed quite content to stay out there. I put her back on the eggs under duress, but once in the crate she sat.

I applied topical Ivermectin, which I should have done at the outset of her sitting. Hens on eggs often don’t dust bath enough and can get infested with mites and lice, causing them to get off their eggs prematurely, or worse, a bad infestation can kill them. I wasn’t confident that she would stay the duration – 21 days. There was no other broody hen as back up and I didn’t feel up to borrowing an incubator to hatch the abandoned eggs and then to care for them sans mother hen.

Just in time, Aurora started to go broody. She’s an experienced hatcher and raised nine chicks in May. On day 10 I let Spot into the yard, who didn’t even give a backward glance to her eggs – turns out she didn’t really want to go for a swim, so to speak.

Then I moved Aurora into place. She’d only been broody for a day, but that’s usually enough for them to be committed. Not so! She, just like Spot, seemed to be restless and even pooped on the eggs! Two days of that meant I had to come up with Plan C or the eggs would be goners.

I stopped by Thomas and Elizabeth’s to check on my patient, a chick with curled toes and was bemoaning my current situation with fickle hens. They had three hens already sitting on eggs so moving my eggs there wouldn’t work for lack of space under them and their chicks would hatch before mine. They had a forth hen though, a wanna-be mama, Nefertiti, who was crossing her toes they would give her eggs.

We discussed different scenarios for potential solutions: I’d bring a dog crate to their place and Nefertiti would hatch my eggs there. Or I’d take Nefertiti home and return her once the chicks were grown. We settled on the latter: they had no room in their coop and were going away for two weeks so didn’t want to complicate things for their chicken sitter.

I brought a crate over in the morning and Nefertiti was sitting contentedly when I came back in the afternoon. We put a towel over the crate openings so it was dark and I drove her home without as much as a cluck coming from the back seat.(By the way, Nefertiti means ‘the beautiful one has come’ which I think is fitting in this instance). Once there I could see Aurora was champing at the bit, waiting to get out of the crate. So off she went to rejoin the flock and I slid ten eggs under Nefertiti (one having already been broken by Spot). I don’t think she even noticed the change of scenery and was happy to be given the opportunity at motherhood once again. And wouldn’t you know it, Aurora headed straight back to the nest boxes! Chickens are territorial and broody hens will often return to the place they associate with their eggs, even if they’ve been on eggs and the original spot is now empty. 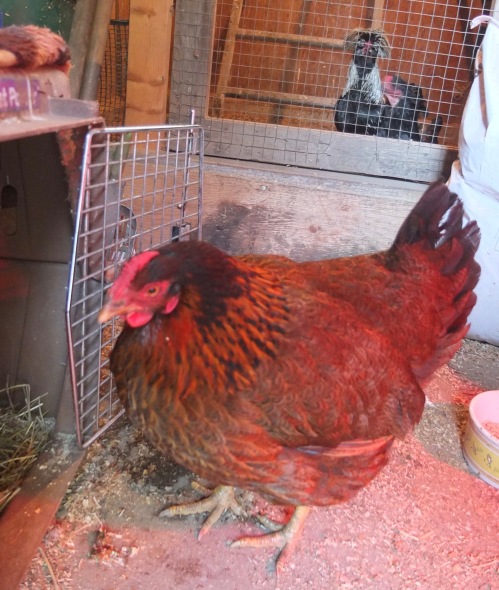 Nefertiti In The Coop

Nefertiti In The Coop

So now I had someone else’s hen hatching my eggs and one of my hens wanting more eggs! I only gave eggs to Spot, then Aurora, to appease them. I didn’t need more chicks. So now there had to be a Plan D or I’ve be dealing with an unhappy broody hen who would end up with no chicks. I let Aurora sit for several more days, till she was thoroughly committed, not wanting a repeat performance of her abandoning eggs. On day 16 I moved her back to the crate and gave her golf balls not confident she might not break eggs. She was still agitated to get back to the nest boxes.

This is the first time in more than fifty hen hatches that I’ve experienced this. Either hens stop being broody or they settle in the crate, but have not fixated on returning to their original next. On day 18, what would be lockdown if you were using an incubator, I took two eggs from Nefertiti and slid them under Aurora. I usually try to take two similar eggs (i.e. blue or white) so I know which chicks each hen hatched. Nefertiti is a biter, so I grabbed the first two eggs I could (one blue and one frizzle). At last, Aurora seemed to be in the zone and didn’t bolt for the crate door.

Day 21, hatch day came and went with no action on any of the eggs. I expected that there might be a delay because of the inconsistent incubation. I started to worry that there might not be enough chicks to go round and someone would be disappointed. On day 22, Nefertiti hatched two – maybe three, it’s hard to say as she kept me from looking under her. Sadly, I found one of the chicks had died, or I should say killed. There were pecking injuries on it and I believe it had issues and she culled it. Only one of Aurora’s two eggs had hatched. I noticed that Nefertiti had another one pecking its way out of the shell, so I nabbed it and gave it to Aurora just in case something happened to her singleton.

After all of that drama, they ended up with five live chicks between them. When the littles were three days old I moved them to their next home. Aurora went to a netted area within a 450 square feet wired pen adjacent to my main flock. The other section has two hens with their ten five-week old chicks. When those mothers are done with them the hens will move back to the main coop and the youngsters will stay there with all the other grow-outs from the season in their own coop. 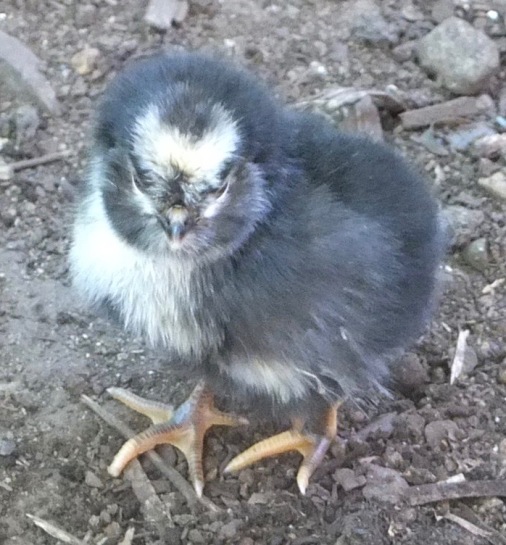 Nefertiti and her trio were moved into a mobile chicken tractor that was given to me by Anne and Steve. They had only used it once and I hadn’t a need for it yet. It definitely came in handy for this situation. 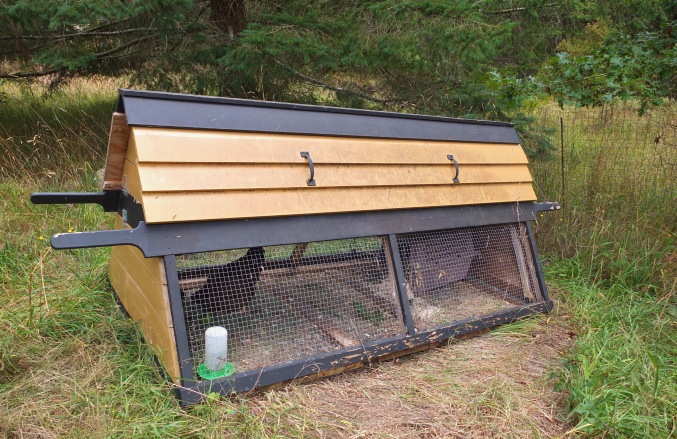 If you’ve read some of my posts you’ll know that I am always yakking on about biosecurity: being careful about not tracking pathogens between flocks, not wearing footwear from one farm to another and adhering to proper hygiene. And here I was bringing a live hen, from someone else’s flock, onto my property. What can I say? Desperate times call for desperate measures. She was housed in a crate in a separate area of my coop (concrete floor which I could disinfect) and then I was able to move her and the chicks into a field more than 50’ away from my pens. It was the best I could do to reduce any potential cross-contamination of pathogens between my guest hen and my own flock.

I’m happy to report that both hens and their chicks are doing fine and Spot seems quite content to have skipped an opportunity at motherhood.

Update September 2019: Nefertiti ended up being here for eleven weeks and went back home when her chicks were nine weeks old. Here are some photos of her and the three chicks. 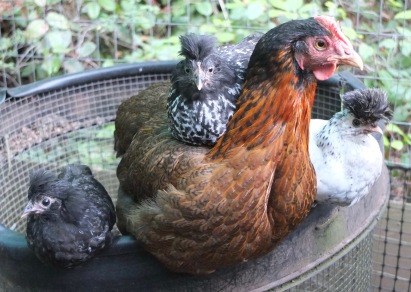 0 comments on “Nefertiti: Pinch Hitter For The Bitchin’ Chickens Team”