Nothing is more heart-warming than seeing a hen with her chicks. Their maternal care and dedication makes having chicks the highlight of the season for me.

I’ve had many hen-hatched clutches over the years – 56 to be exact – and for the most part they have run like clockwork. I sequester a hen in a separate area from the flock, supply her with fertilized eggs, food and water and, for the most part, stay out of her way.

When I have multiple broodies I have to juggle indoor and outdoor space to house them. Once the chicks have hatched and are mobile the family gets moved to an outdoor pen. I’ve got a 450 square foot pen and coop adjacent to my main flock. I’ve cordoned off 150 square feet for the hens and their chicks, often having two, sometimes three, in there at a time. It’s an L-shape, designed to provide enough space for each hen and has several shrubs ringed with wire cages, with mesh big enough to allow the chicks in, but keep the hens out.

Most of the time things hum along smoothly. The pecking order established when they were in the flock gets carried over to the brooding area. There’s always one hen who hogs the food dishes or the best areas, but the conflicts have been minimal, partly because I try to place their crates far apart and have multiple feeders and waterers.

Last year, Aurora and Mango were sharing the space with Ivy. They both kept her at one end of the pen and were so compatible that they voluntarily ended up sharing a crate with each other and their ten chicks. When Aurora was ready to head back to the main coop she left her chicks in the care of Mango who raised them all for the next few weeks, without complaint.

I’ve been called to intervene a couple of times: when hens have abandoned viable embryos waiting to hatch. In those cases, I’ve helped the chicks and returned them to their mothers who accepted them without issue. (Read: Assisted Hatch #1, #2, #3)

It is probably a chicken breeder’s tendency to gloss over the bumps and focus on the success stories. I’ve written about the highs, but I also think it’s important to learn from what can, and does, go wrong.

Nigella, an Appenzeller Spitzhauben/Polish/Easter Egger x, was a first time broody. A friend had given me a dozen purebred Australorp eggs to hatch for her. Nigella was a diligent sitter, but somehow she managed to break four along the way. Hatch day arrived and she broke three more eggs and killed the chicks as they were hatching. By the time I discovered what she had done they were already dead. I’ve heard of that happening, but it was a first for me. I’m not sure the motivation, but can only think that she panicked.

Three chicks hatched late: one was robust; one had spraddle leg, which I attempted to fix, but it died the same day; and one hatched late, on day 24, was weak and died. Once she abandoned the three remaining eggs I cracked them open: all had fully developed chicks that failed to hatch. I’m not sure why as she had sat on them consistently.

For the first two days she sat on the sole chick, but didn’t communicate with it at all– no clucking to show it food and water, so I had to ensure it was fine. I re-homed the two of them and got reports that she turned out to be a good mother, but it was a bumpy road getting there.

Then I dealt with Maddy going broody for a second time that summer. She’d been a proven good mother so I had no concerns. When I checked on her she seemed to be sitting on the eggs intermittently, sometimes I’d catch her just standing over them. We were experiencing a bit of a heat wave and by day six she was done. I rushed off to borrow an incubator (not my forte) from Taylor and Dave and had the eggs in there for the next nine days.

Luckily I was saved by Mango, who was also going broody for the second time. I pulled the eggs from the incubator and she sat on them for the next eight days, hatching only two chicks on day 25. On day 26 a very late straggler was stuck in the egg and required my assistance. Once fluffed, I returned him to her. 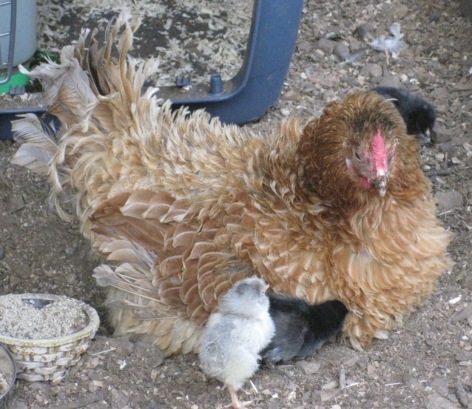 I cracked open the remaining eggs: one unfertilized, one early quitter and sadly, four fully developed chicks that didn’t hatch. And also sad, one of the first two chicks to hatch seem to struggle from the outset and died nine days later.

I’m not sure why the hatch was so late, but I think because the eggs were not consistently incubated by Maddy in their first six days their development was delayed. It’s a hard thing to know that viable chicks died in the egg just short of hatching.

So far this season I’ve had four hatches and all started off fine.

This year, I put Aurora in the chick pen with Shona (Crested Cream Legbar), who is a low status hen. Shona’s chicks were slightly older so I had no worries about the chicks getting into scraps. In my experience, if there are conflicts it’s between the hens, not intergenerational. No adult has ever hurt a chick from my flock. Until now.

I noticed that Aurora was bullying Shona a bit, pushing her off the food dishes and keeping her at one end of the pen. My plan was to separate them in a couple of days and thought they’d be fine till then. Wrong. I came home from work and found the biggest of Shona’s almost 5 week old chicks in one of the wire rings around a shrub. At first glance I thought he was sleeping and then realized he was dead. There were signs of being pecked: missing feathers and wounds on his head and neck.

Various scenarios ran through my head: had the mink come back? No, because there were no injuries to the other birds and everyone seemed calm. Did he die of some unknown cause and was pecked post-mortem? I thought not, as he was totally fine until then and was a big, robust chick. How did he die in that wire ring? I’ll never know for certain, but I suspect that a conflict between Aurora and Shona must have escalated and the chick flew into the ring. The mesh is 2”x2”, large enough for a hen to peck and cause injury to a defenseless chick. Once incapacitated, he was further injured and killed. 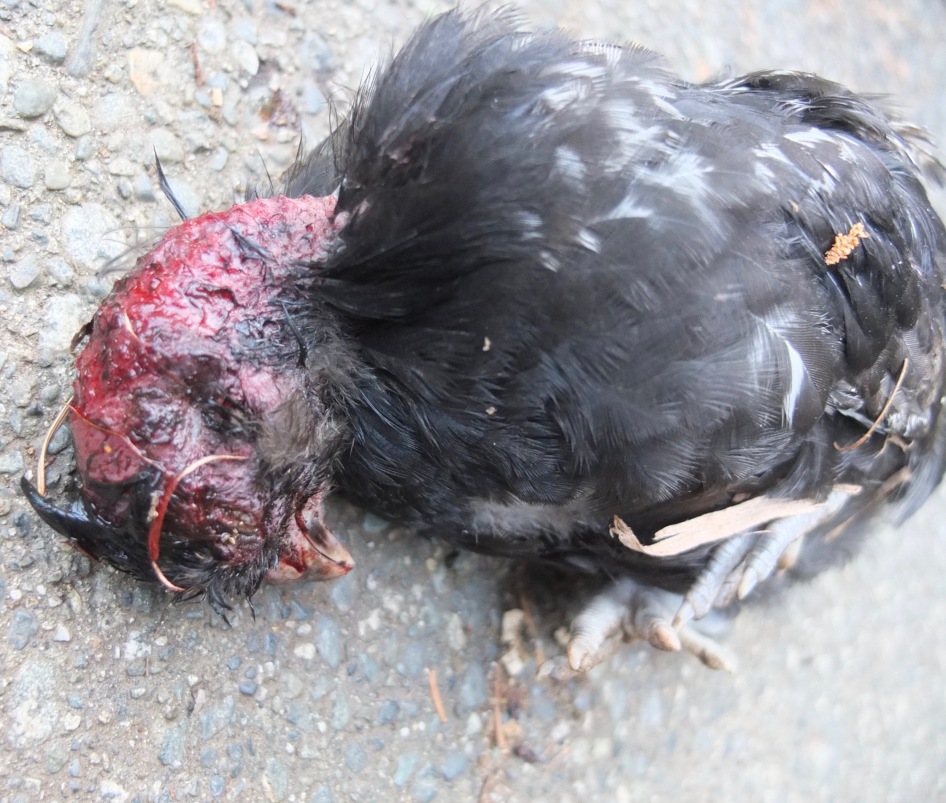 I felt terrible that I hadn’t foreseen the potential danger to Shona’s chicks and moved them sooner. I’ve heard of, but never experienced, violence between hens and chicks, so felt it wouldn’t happen – especially after seeing Aurora’s laid-back style with Mango.

It’s another lesson in flock dynamics and a reason to understand and pay attention to chicken behavior. Just because something hasn’t happened yet, doesn’t mean it won’t in the future. There’s a first time for everything and this incident was a rude wake-up call.

It’s a good thing, on balance, that things go smoothly and have happy endings as I don’t have the heart (or stomach) to deal with the few times they don’t.

0 comments on “Broody Hens: The Good, The Bad & The Ugly”