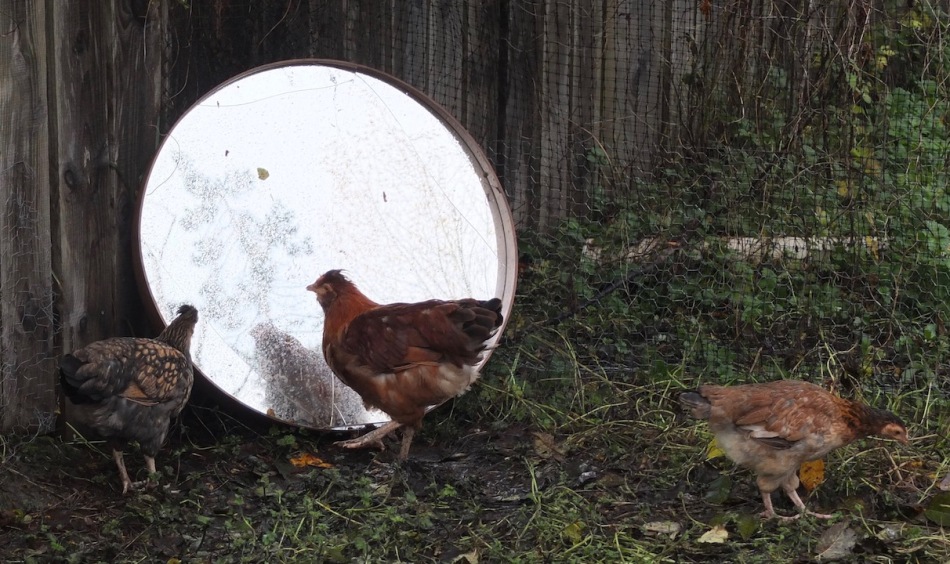 : the state of being weary and restless through lack of interest

Most of us understand boredom to mean an emotional, or sometimes psychological, state experienced when an individual is left without anything in particular to do, is not interested in their surroundings, or feels that time period is dull or tedious.

And we’re probably familiar with the proverb “idle hands are the devil’s workshop/playground” observing that when someone is unoccupied and bored they’re likely to get into trouble.

The opposite of boredom –  being engaged – makes us feel energized, connected and involved in our surroundings.

We know that there is a correlation between positive mental health and physical health, for both people and chickens. For us, boredom can lead to watching too much television, being sedentary, overeating or depression. Confining chickens  – even for their own safety – can also lead to boredom, overeating, lack of exercise, and negative outcomes. My birds are penned, but live in a stimulating space which has promoted their social and physical health.

There are two fundamental things you need to know about chickens in order to keep them happy: they are flock animals and they are foragers, that is, they have adapted to belong to a social hierarchy called a pecking order, and they like to move around their environment in order to find food, safe places to lay eggs, dust bath, nap and avoid predators.

When I first got chickens they were allowed to free range. For the last 11 years, for a variety of reasons, I’ve opted to keep them penned. In doing so I feel I’ve reached a happy balance of managing my flocks’ needs as well as protecting them from predators.

In this post I’ve put together some easy DIY ideas that you might adapt to your own flocks in order to promote their mental and physical health. I’m an avid freecycler and bargain hunter so all of these suggestions are free or inexpensive.

To give you an idea about my set up: My main pen is 30’x40’ which is fenced with overhead netting. It contains a 100 square foot coop, a 3-sided tool shed, covered dust bathing area, three fruit trees and some shrubs (all wired to protect them from my birds) and a 10’x20’ car canopy shelter – 2/3 of which is tarped to protect them from the rain, snow and sun. I have multiple waterers outside the coop, while the DIY feeders are inside. There is loads of roost bar space and multiple nest boxes. My flock varies from 20-30 birds, including one rooster. I have a second adjoining 15’x30’ pen with a 4’x8’ coop for broody hens, chicks and teenaged grow-outs.

Chickens require year round access to a dust bath. It’s both an opportunity for them to socialize as well as rid themselves of external parasites like mites and lice.

Chickens should be called pigs. They seem to have voracious appetites and never turn down the opportunity to eat. If I fill my flocks’ feeder at bedtime its an invitation for them to get off the roost bars for a late night snack. Making them work for their meals is a good way to keep them interested as well as burning off a few calories in the process. You can easily suspend food, just make sure there are no metal bits that can come loose and be accidentally ingested.

I’m a volunteer at a local food recovery program and regularly get totes of totally edible fruits and vegetables. I scatter them around the pen so my birds can walk around eating and so that everyone in the flock has equal access.

Chickens are always on the move and exploring the world with their beaks and feet. Providing them with organic litter keeps them busy. For years I’ve been able to pick up bags of free leaves from city dwellers who don’t compost them. It was easier when I had a pick up truck, but I can still get loads into my hatchback. I’ve found multiple sources of raked and bagged leaves from scanning the online classified ads.

Occasionally I’m offered free bales of straw. Typically I don’t use straw in the coop because it can become a place for mites and lice to hide. I would only use straw outside in the dry season as both straw and hay can mold making my birds sick.

I live in the Pacific Northwest in a temperate rainforest. We do get snow, not often or a lot, but enough to keep my chickens from wanting to put their tender toes outside. I don’t want my birds stuck inside for days on end so I dump some of their old shavings to make piles and paths in an effort to encourage them to leave the coop. I wouldn’t do this on a regular basis: used shavings can also harbour external parasites, like mites and lice and their eggs, so I like to dispose of them away from my birds. I use the bedding to mulch around my trees.

I’ve got a number of trees and shrubs that provide shade and shelter. They also double as a jungle gym. Because the top of the pen is covered there is no chance that my birds can escape.

Every year I haul the old Christmas tree outside. Before I had chickens I left it for wild birds to roost in and explore before chipping or burning it in the spring. Now my flock gets first dibs. After a week or so, most of the needles have either been eaten or dropped off, at which point I remove it.

I picked up several xylophones from the local recycling centre and mounted them on the side of my coop. One hen wandered over, pecked a key and that was the end of it. My flock clearly showed no musical aptitude, but apparently some birds are aficionados, learning to play xylophones and kid’s keyboards.

Again, inspired by online posts I crafted a couple of swings and installed them in the run. I never saw any of my birds show the slightest interest, so down they came. Some birds, on the other hand, seem to have trapeze artist in their blood and can’t get enough of them.

Nothing like a mirror to keep chickens guessing who the new member of the flock is.

Chickens are social animals and they need company: other chickens, household pets, livestock or people. If you spent any time with them they will see you as part of that flock. Grab a chair or a bench and have your morning coffee with your birds. Feed them by hand. Take their photos. Handle them to the level they are comfortable. The more time you spend together the more beneficial it is for building trust; an opportunity for your rooster to accept, and not challenge, you; or a a chance to spot any changes and potential health issues before they become serious. Socialization is also a critical component of both emotional and physical health – for our birds as well as ourselves.

All photos, including the featured photo, are by Bitchin’ Chickens unless credited otherwise.